I spent the second happy hour of Pittsburgh’s Three Day Blow Festival taking a tour of the Wigle Barrelhouse. Yes, that’s different from the distillery where I spent the first happy hour. A little while ago, Wigle outgrew its distillery and had to expand to a second location in another Pittsburgh neighborhood. Roughly speaking, they distill their spirits in the distillery and age them in the barrelhouse. They also have fun events at both places; so put it all together, and it’s sort of like a whiskey-themed amusement park. The Distillery is the Magic Kingdom, and the Barrelhouse is Epcot.

We’ve been to a few of these distillery tours (and that reminds me, we have a few others on the list), and they’ve all been great. It’s always fun to see the still and big stacks of malt and grain, and to hear about the distiller’s inspiration to get into the business, and to hear them talk about what makes their spirits different.

With absolutely no criticism of those other distillery tours, I have to say that Wigle takes it to a whole new level. They do charge ticket prices, which many distilleries don’t, but it’s worth the price in liquor alone: a cocktail and about seven different samples are part of the tour. And there’s far more to this tour than tasting the liquor. It’s both very entertaining, and very educational. It’s 90 minutes, in the expert hands of a tour guide who knows their way around whiskey, and also knows how to handle the other people in your group who may have had one or two before they arrived. Believe me, if you go on the Wigle tour, you’ll have a good time, taste some great spirits, and learn a few interesting things about whiskey.

Here are some of my highlights.

There are lots of them at the barrelhouse–you might expect that. Almost all of them are new oak barrels, with the insides charred. That’s the requirement for an American whiskey, whether Bourbon or rye. The barrelhouse smells like wood and fermenting bread dough. Interestingly, Scotch whiskey barrels are toasted (more like a baking), while American whiskey barrels are charred (more like a scorching). No one knows why there’s a difference, and we only have guesses about why the inside of the barrels is burnt at all by whatever means. One theory is that earlier on whiskey barrels weren’t always fresh barrels; maybe they came from Lake Erie with a bunch of fish in them, and were sent back with whiskey in them. So, the distillers scorched them as a very thorough form of cleaning. David Wondrich, on the other hand, simply thinks that early on distillers learned that scorching  accelerated the aging process (by creating more surface area on the inside of the barrel) and turned the whiskey a nice, aged looking color (because of the black in the char, of course).

A few of the barrels, by the way, aren’t new oak. Wigle borrows barrels from other places, like apple brandy makers or tequila distillers, to lightly age their gins, bringing in soft hints of other flavors. In exchange, Wigle lends out its used–and therefore no longer eligible for whiskey aging–whiskey barrels. If you’ve ever had a Bourbon barrel beer, that’s how it happens.

I said that this tour was about more than the liquor, but tasting the liquor is definitely a part of it. I especially appreciated how thoughtfully Wigle arranged the order of the tasting, so that you got a good idea of what difference aging makes, or how using a different grain affects the taste of the whiskey. It was a delicious education. 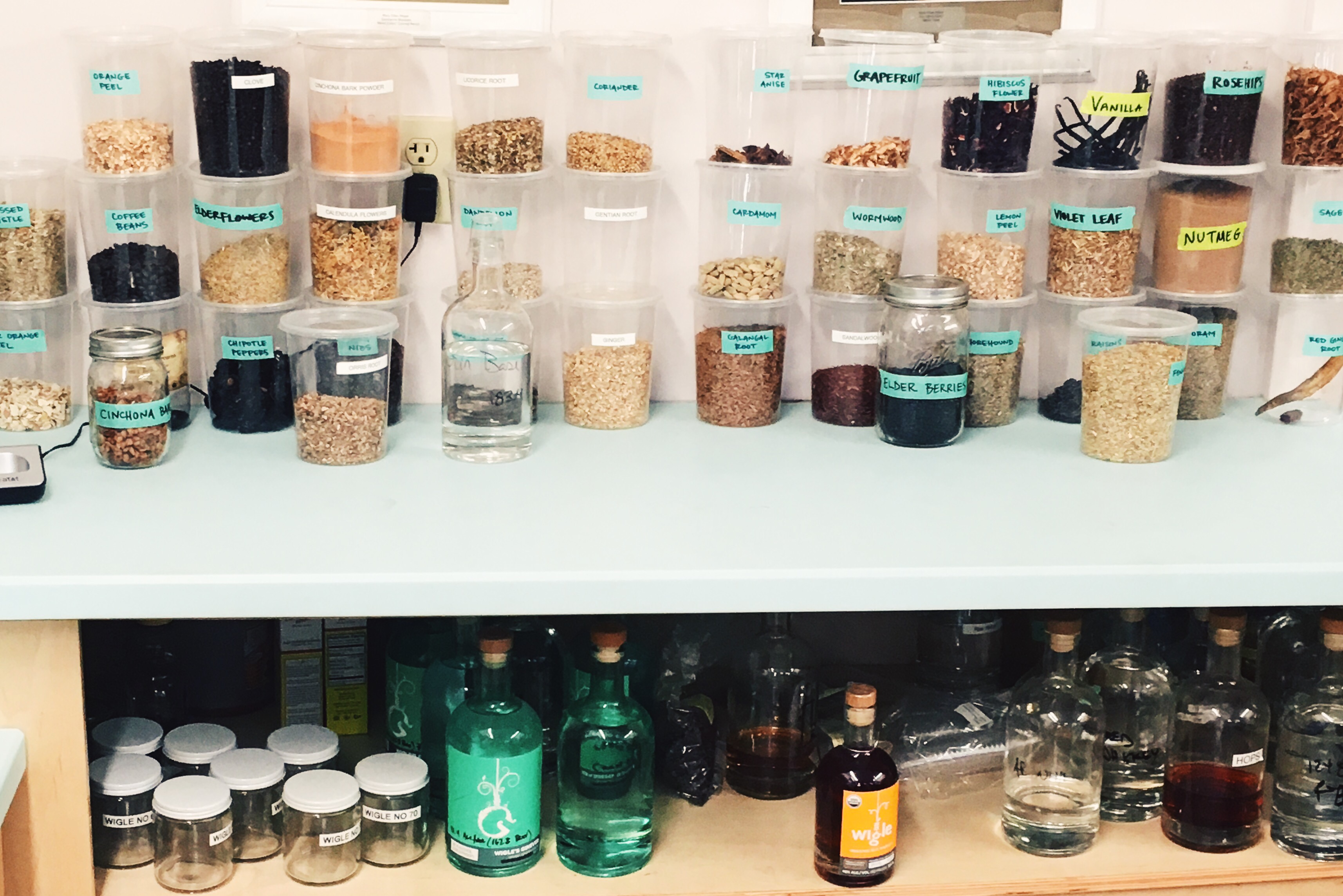 My favorite room in the barrelhouse was one filled with samples of all sorts of herbs, spices, fruits, woods, and more. It’s a laboratory for experimenting with the spice mix for their honey spirit, or the herb mix for their gin, and where they try to get an idea ahead of time of how a gin might taste once it’s been aged in a tequila barrel. Just looking at all of those jars of spices and spirit experiment made me look forward to Wigle’s next seasonal release, and the next one, and the next one.

Want to visit yourself?

Tours happen at both the barrelhouse and the distillery, weekends from May until October. You have to sign up for a time slot ahead of time, because they try to keep tour sizes manageable. I only went through the barrelhouse tour; so I can’t tell you whether or how they differ. I would guess they have more focus on barrels in one and stills in the other, but you’ll have to wait for my next visit to Pittsburgh for me to confirm.

Pittsburghers, by the way, it seems like there’s always something interesting happening at the Whiskey Garden outside of the Barrelhouse; so keep an eye on their calendar, or sign up for their newsletter. 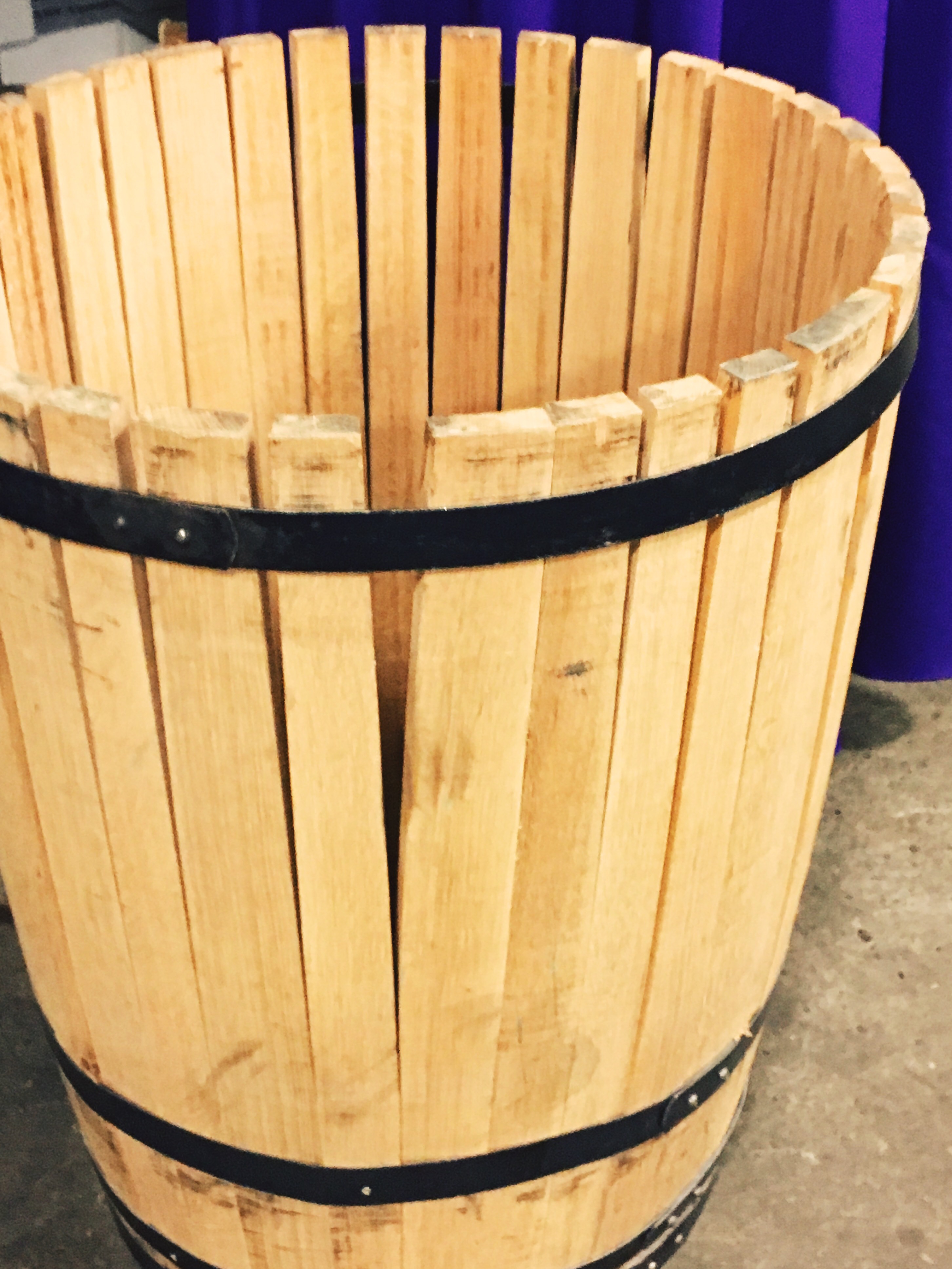