21 Jul Party Tip: The Design Your Own Daisy Cocktail Bar

When we’re not making drinks, we’re riding bikes. When you’re a serious cyclist, you end up spending a lot of time with what I might call gearheads. Gearheads love the machine at least as much as, and almost separately from, actually riding it. They talk endlessly and with great specificity about the latest product developments. They are constantly upgrading their equipment, tinkering with their gear ratios, and such. They know the exact weight difference in grams between 105 and Dura Ace shifters, and the change in that difference since the last model. They maintain their bikes themselves, and maybe even build their own bikes. It can be a little intimidating. Here’s the thing: you don’t have to be a gearhead to be a cyclist. It’s helpful to have a few gearhead friends, to give you the skinny when it comes time to choose a new set of components or to buy a new bike computer or the like, but we don’t aspire to ever becoming gearheads ourselves. We just want to ride our bikes.

The same gearhead versus amateur dynamic goes on in the cocktail world. We’re as much fans of well-deployed homemade tinctures, dry ice, and smoked cloves as anyone. As long as the quality of the drinks backs it up, the spectacle of it makes for a great night out. The danger of all of these fireworks is that they give the impression that you have to be some combination of scientist, magician, and herbalist to make a good drink. Nothing could be further from the truth. Some of the very best drinks are simple affairs with simple ingredients. These drinks work. They’re drinks for when you just want a solid drink without much fuss. Some of them have been around for more than 100 years, and they’re very likely to still be around long after the dry ice evaporates. And they don’t take any secret knowledge to drink. 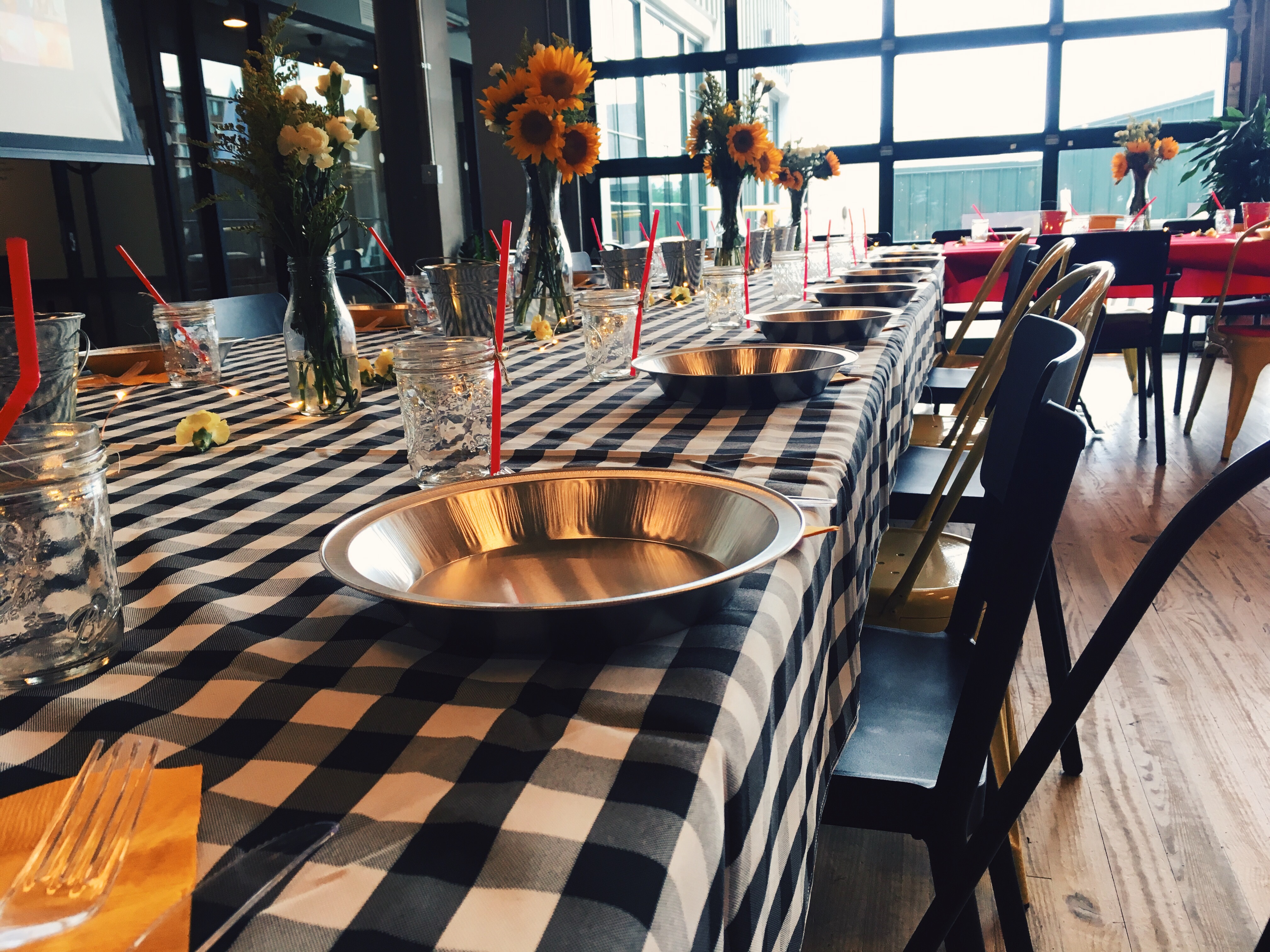 That was never more clear to us than when we tended bar for WeWork’s latest DC Dinner Club. At this party–while we were still doing all of the shaking and serving–we wanted people to feel like they were the mixologists of their own drinks. The daisy seemed like a perfect vehicle for such an experience. As we mentioned during Daisy Week, while in modern times it’s almost exclusively seen in its tequila form (the margarita), the daisy started its life in the middle of the 19th century as a particularly amiable form of mixed drink that made use of a variety of spirits, sweeteners, and liqueurs in a simple but flexible format. We thought the daisy would be ideal for a Design Your Own Drink bar experience for a few reasons:

The Design Your Own Daisy bar went even better than we hoped. People were having a lot more fun ordering than they usually do. While not every single one of the 72 possible permutations was ordered, a good number of them were; and they all worked! The guests were simultaneously impressed by our mixological skills (in creating the experience) and their own (for customizing their own drink)–everyone wins! And the surest measure of success of all: almost no one asked for wine or beer, and absolutely no one requested a vodka soda.

It was such a hit that we’re doing it again for a different party this weekend. We highly recommend it to you as well. An easy and fun bar that makes you look like a genius and lets your guests feel like successful bartenders. Why would you not do it? 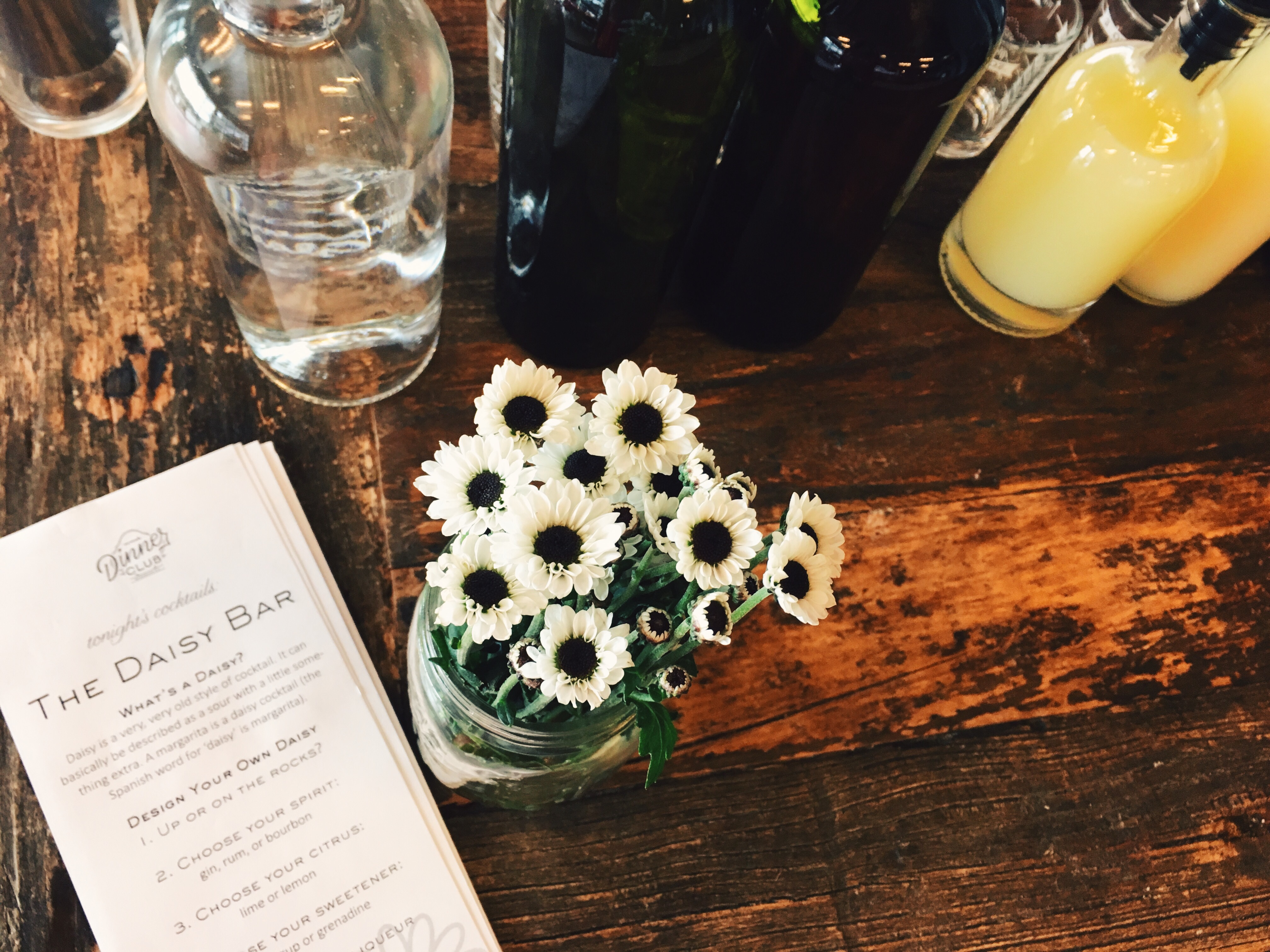 Your shopping list for a daisy bar is, all things considered, pretty short, simple, and inexpensive.

You’ll want 2 or 3 choices. Stay away from vodka (too neutral) and tequila (too familiar). We went with gin, rum, and Bourbon; Cognac would be an excellent choice as well, as would mezcal. You don’t need anything fancy; all-purpose mixing brands will do. We used Gordon’s gin, Wild Turkey Bourbon, and Bacardi White rum. If you go with Cognac, a VS is sufficient.

Pro tip: mixing spirit bottles, particularly if you buy them in handle size (which you should) are a bit inelegant. To pretty up our presentation, we transfer the spirits into decanters or unlabeled bottles.

Buy a bag or two each of limes and lemons. You’ll need the juice of 1 lemon or lime per daisy.

You’ll want 2 choices of sweetener; we used simple syrup and grenadine. They’re the traditional daisy options, and they’re both quite cheap and easy to make, as are cinnamon syrup and chamomile syrup–if you can find the chamomile. Definitely make these syrups yourself; with the commercial ones, you pay a lot more for something that doesn’t taste nearly as good. Among things you can’t make yourself, honey could be an interesting option; molasses or maple syrup may be a bit too heavy.

Choose 2 of your favorite liqueurs. If you want a suggestion, orange Curacao (splurge on Pierre Ferrand) and maraschino are the two most usual daisy liqueurs. Something herbal like Chartreuse or Galliano, or something fruity like creme de cassis or blackberry liqueur would work well also.

Make sure you make lots of ice ahead of time, or buy a bag. You’ll need a bunch, because daisies are all shaken.

You’ll just need enough to put a splash in each drink.

This is a situation when the Boston shaker shows its worth; if you’re making a bunch of daisies in a row, you can build them in separate pint glasses and have them all lined up for shaking. A standard shaker works just fine too. Just make sure you have a way of rinsing the shaker near to the bar.

Daisies can be served either on the rocks or straight up; so have both old fashioned glasses and cocktails glasses available, if possible.

Are you going to be doing the mixing, or will this be completely a DIY affair? If DIY, make sure you have a few instruction cards. 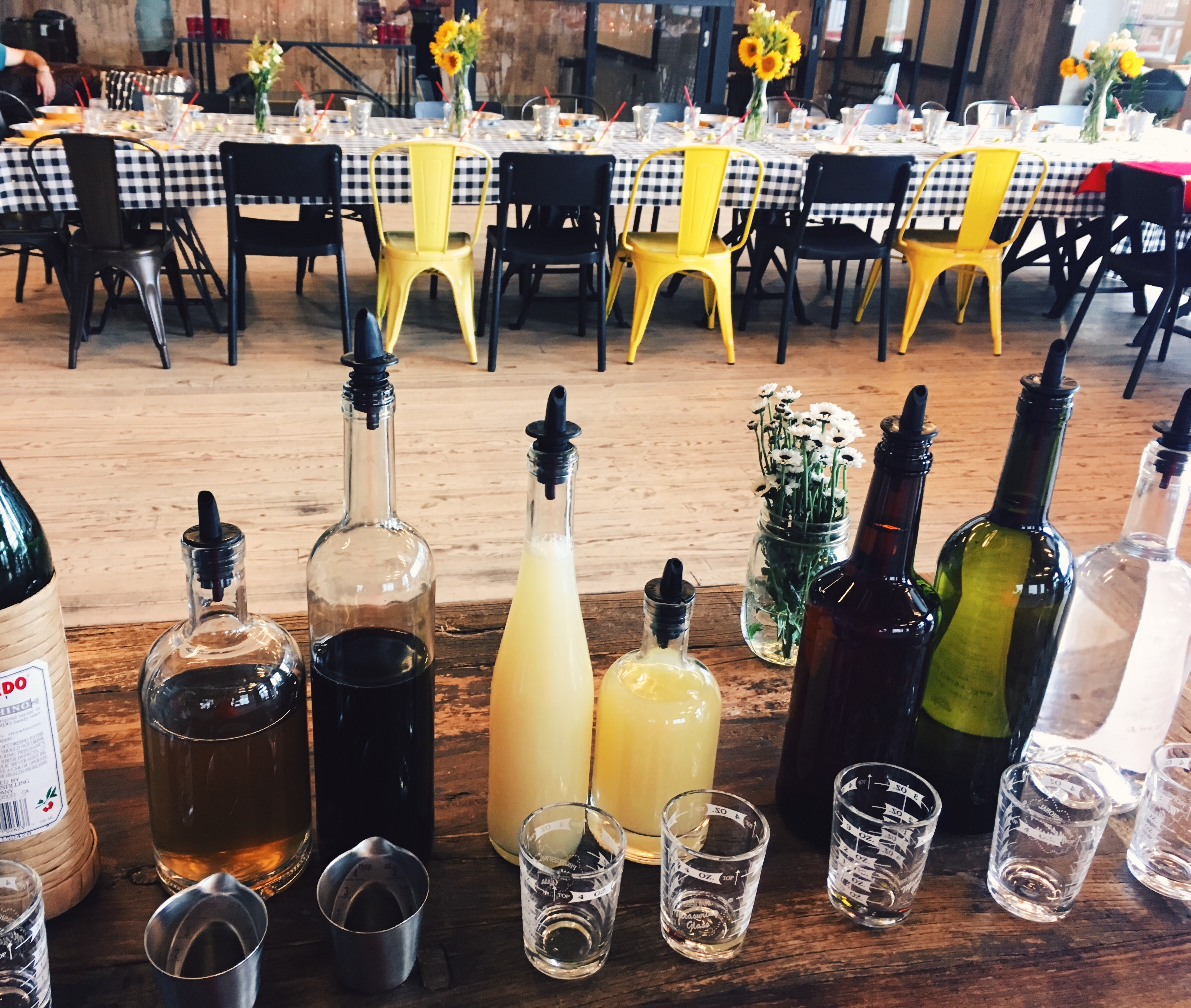 The drinks get built assembly line style, sort of like a Chipotle burrito, but with a mixing glass or shaker bottom instead of a tortilla:

There you go. You’ve designed your own daisy! 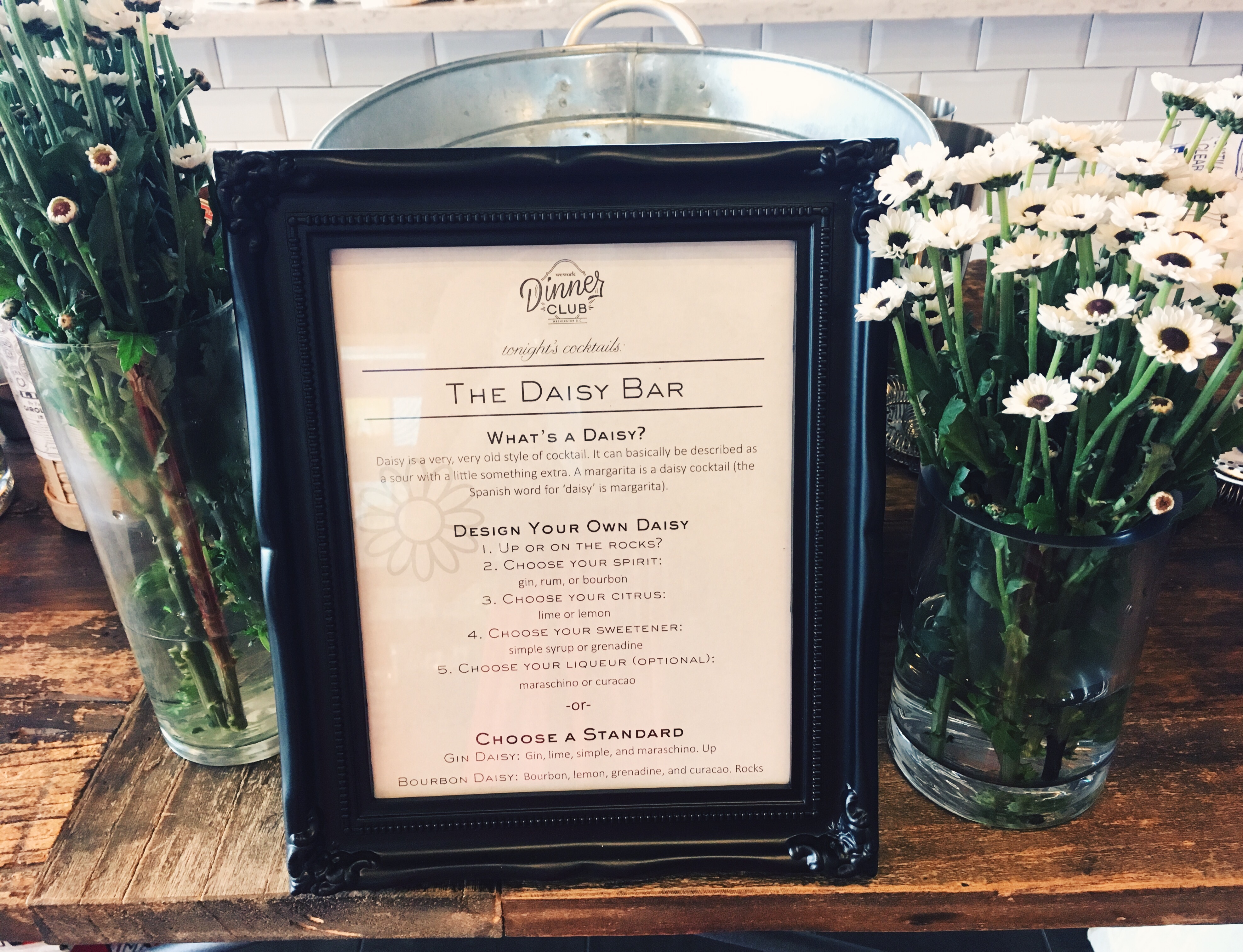 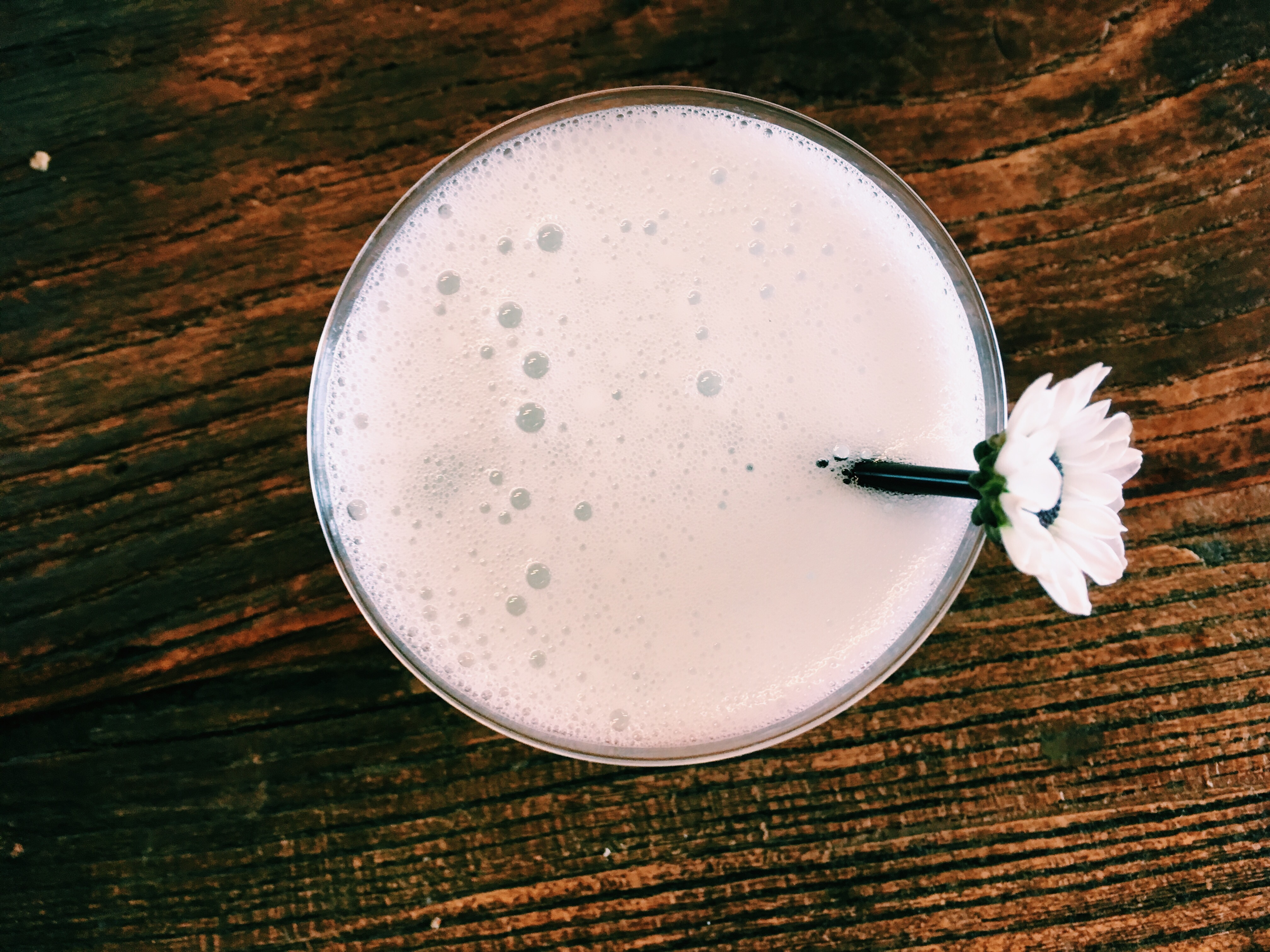 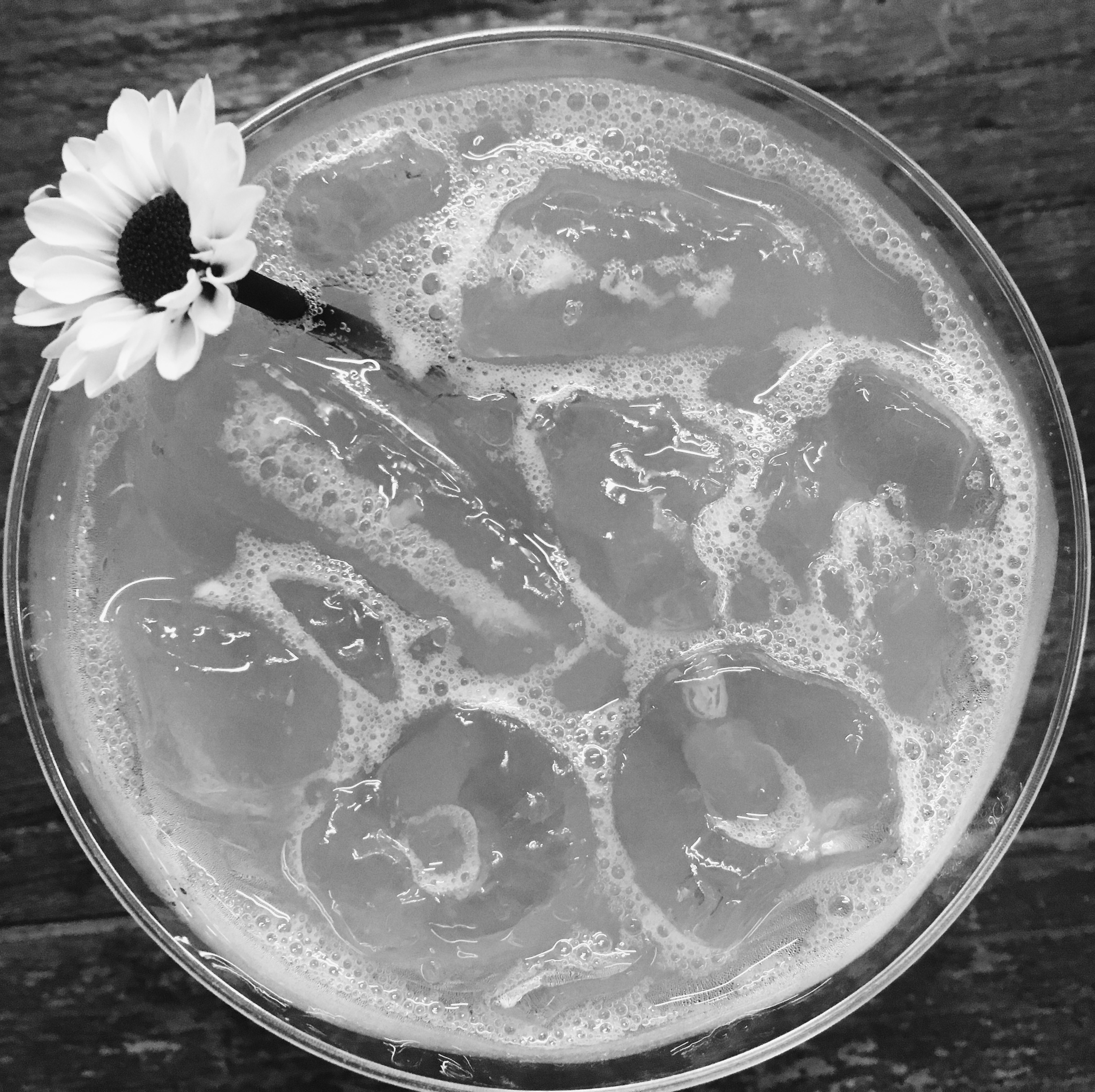 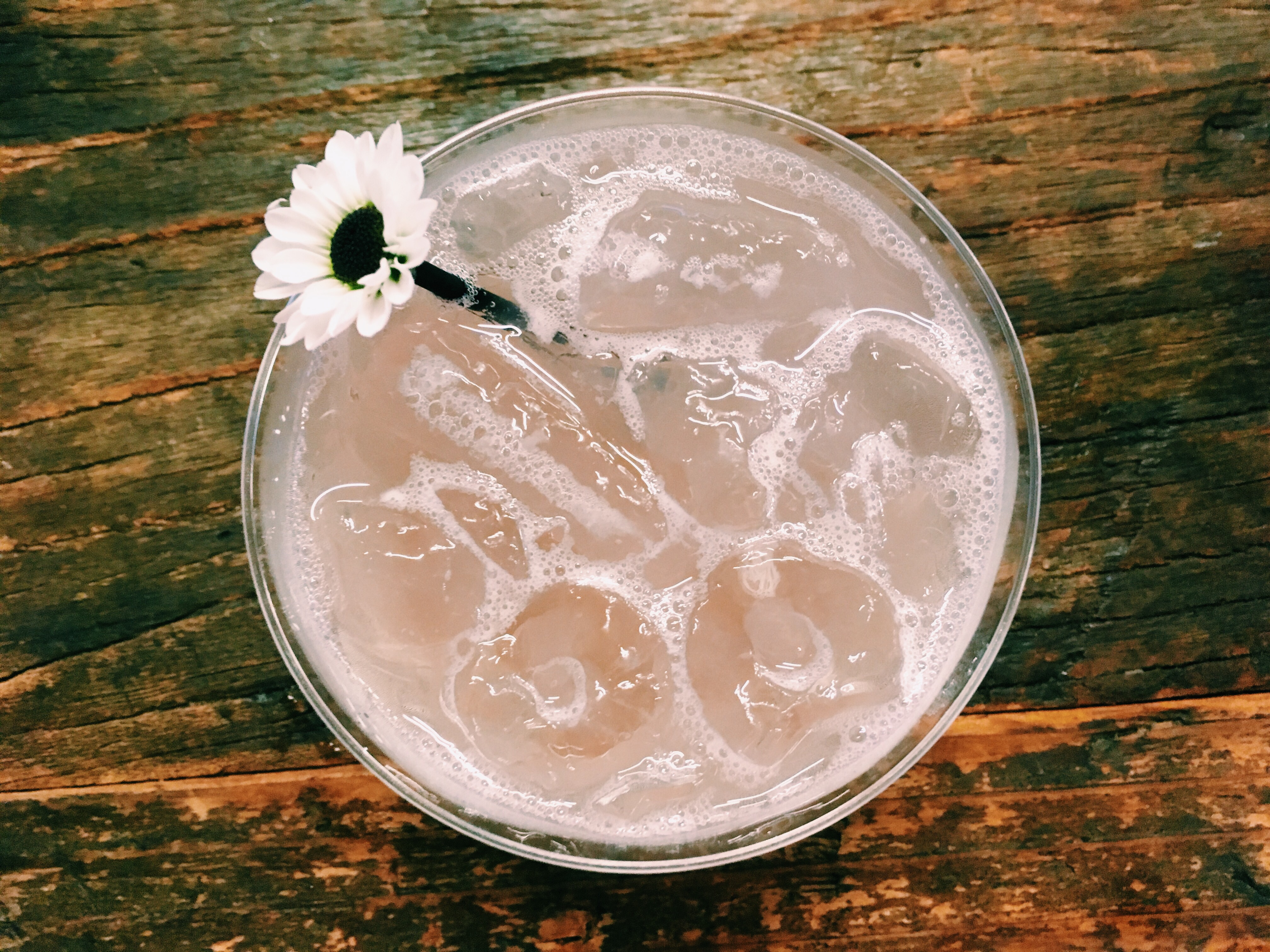 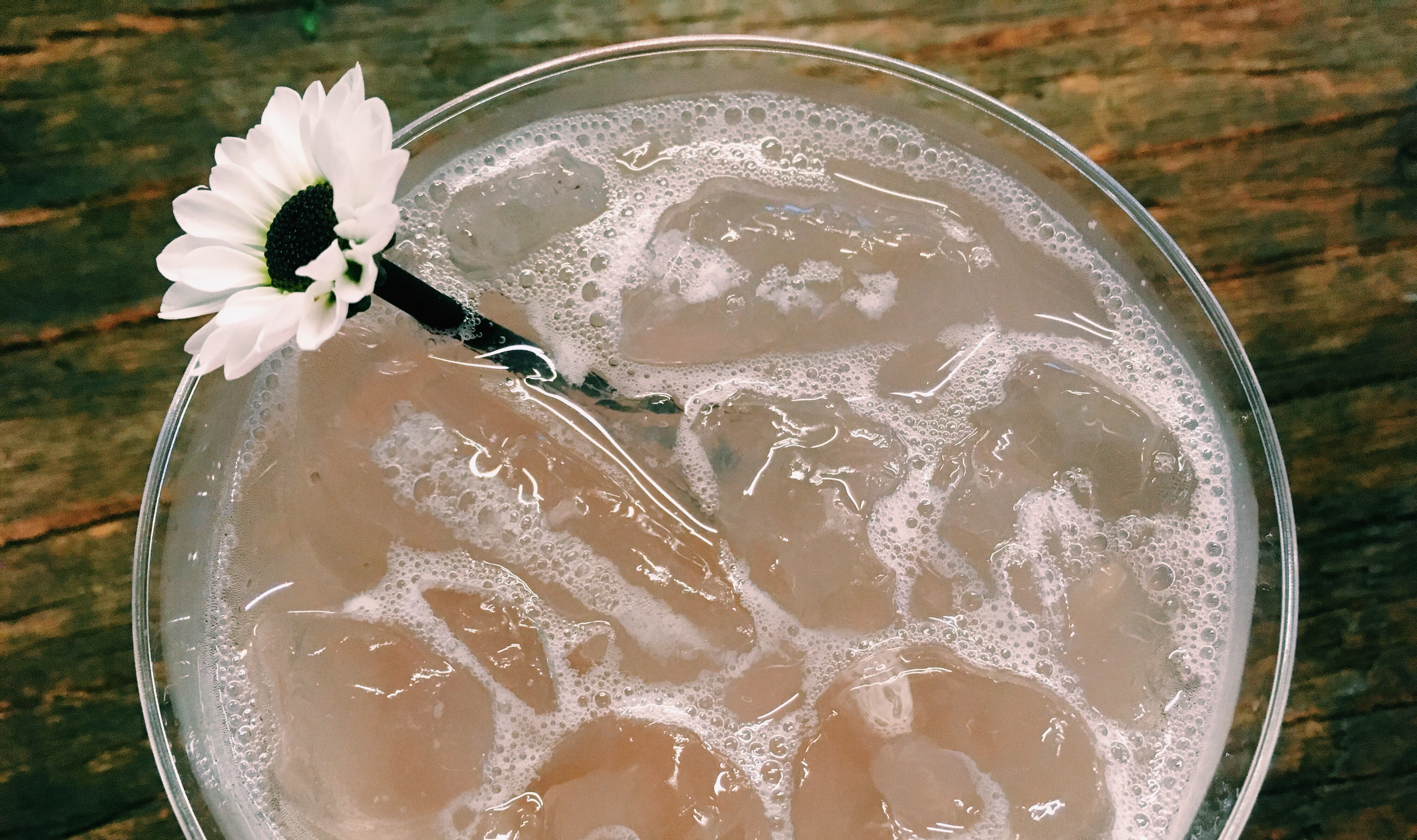 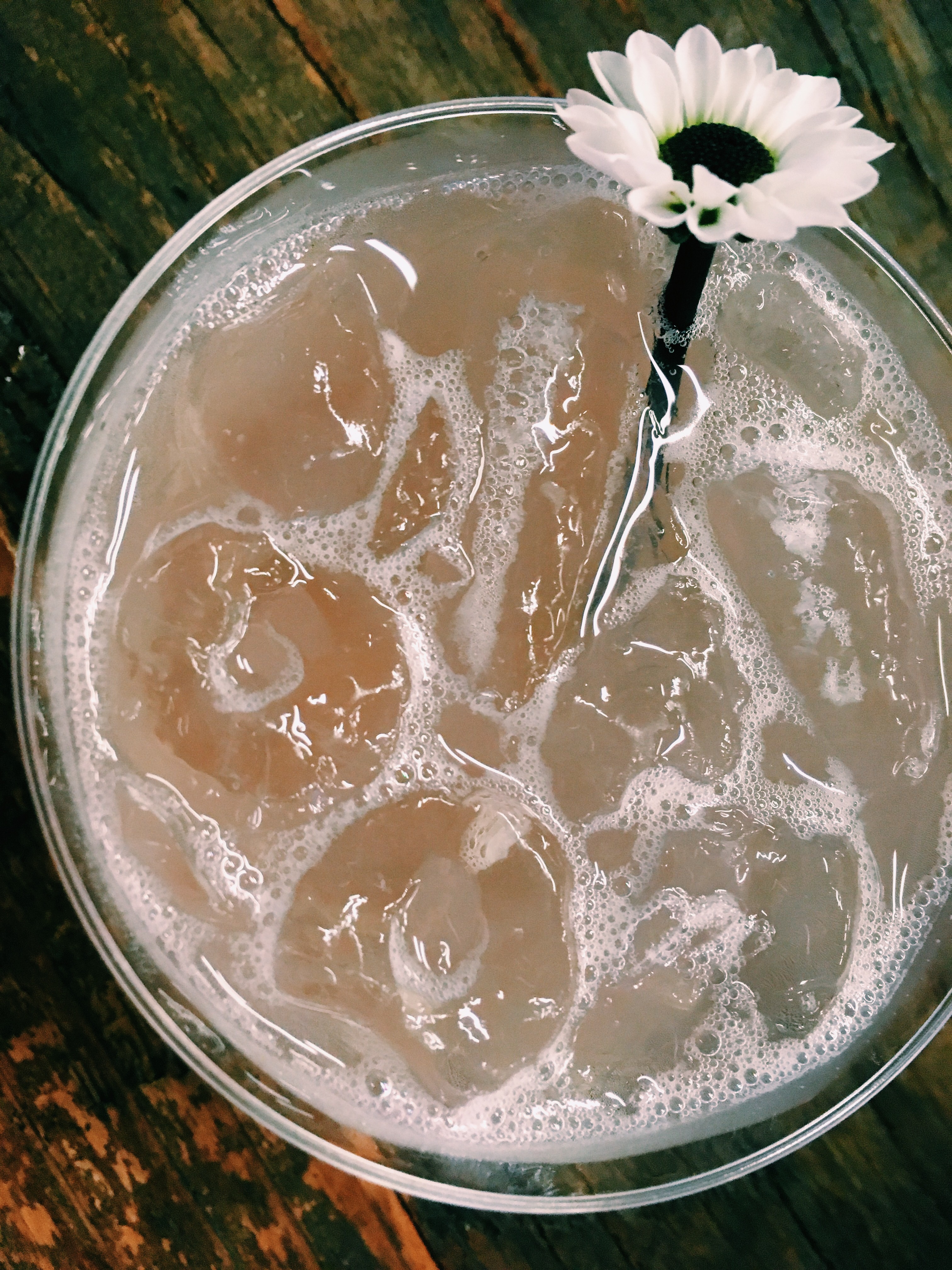 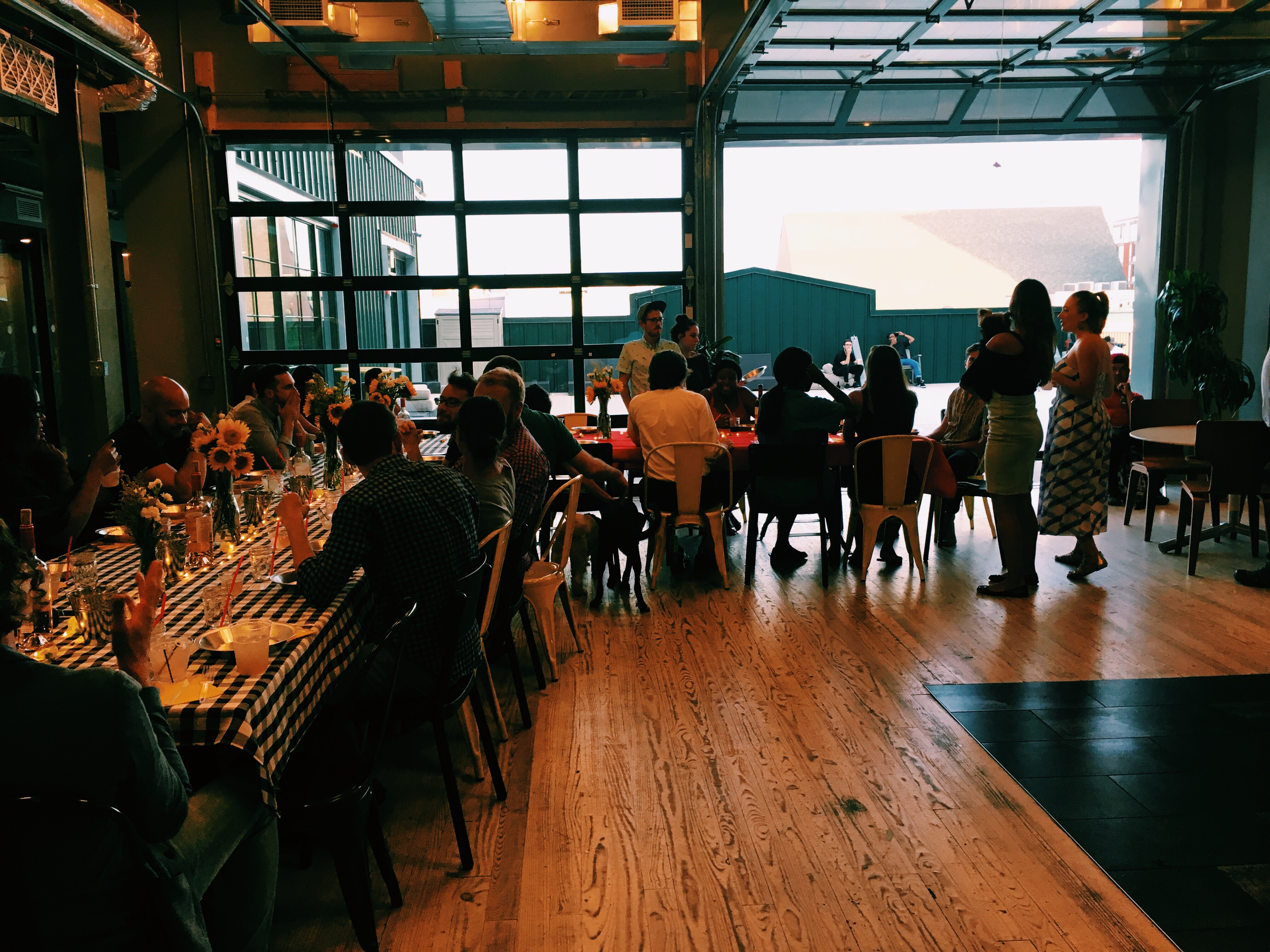 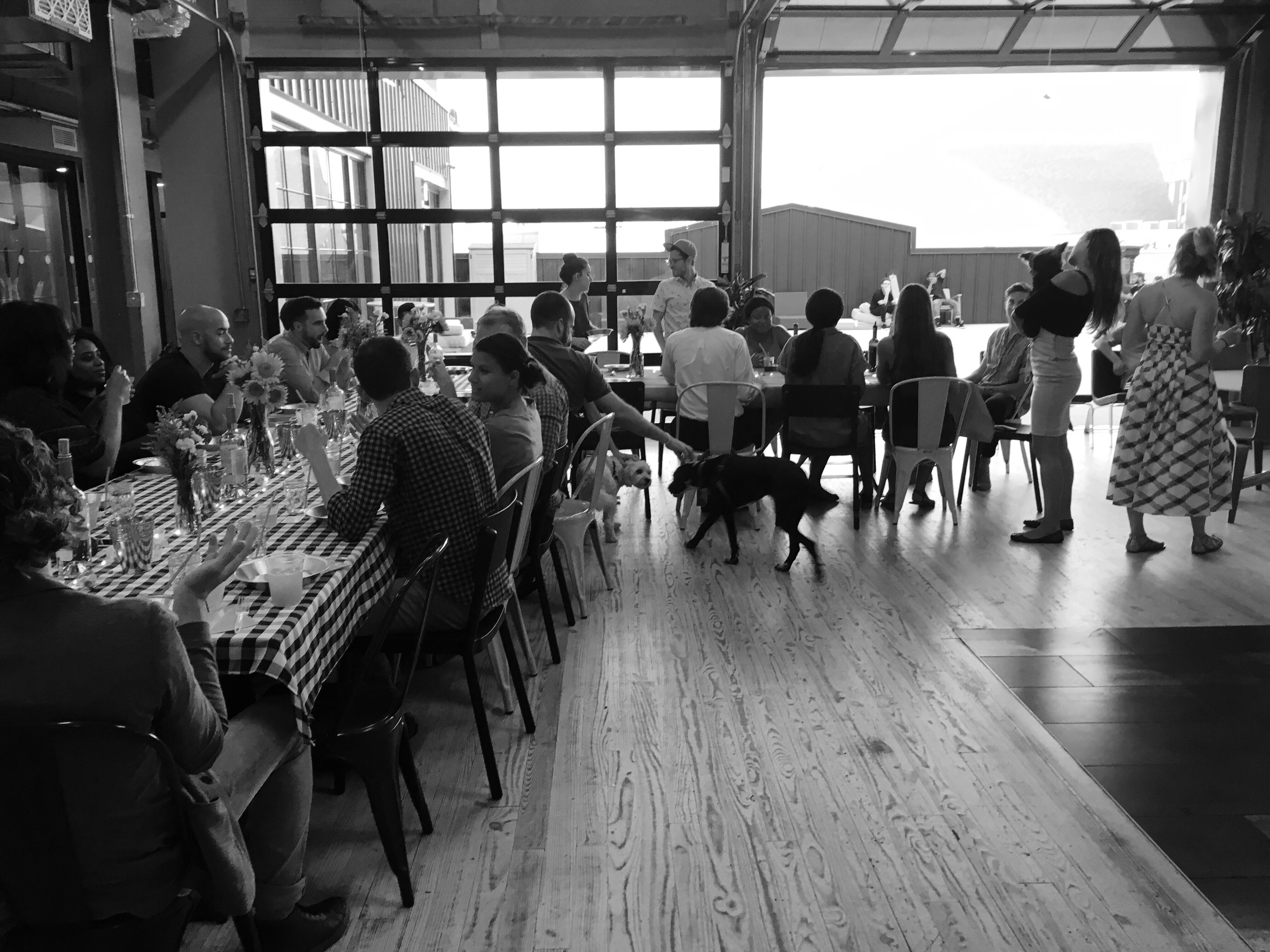