At the beginning of the 20th century, American tourism took off. To ensure that wherever they were these American tourists could find a cocktail, an industry of ‘American bars’ sprung up around the world, often based in the big hotels. It’s a good thing they did, because when Prohibition was passed in 1920, these bars went from being tourist watering holes to the home in exile of the cocktail itself. We might not have cocktails today without them.

Paris, of course, would be a prime spot for one (or more) of these American bars. It was the preferred landing place for American literary and artistic expatriates, as well as a destination for the rich and famous. So, in 1911 a retired jockey named Tod Sloan actually purchased a bar in New York, dismantled it, shipped it to Paris, and opened it up as The New York Bar. Later, his bartender Harry bought it from Sloan and renamed it Harry’s New York Bar. One hundred and five years later, Harry’s is still mixing great cocktails; there’s no way we could stay in Paris without tasting one.

You can count on one hand the bars in the world with a claim to fame anywhere near Harry’s. Gertrude Stein, F. Scott Fitzgerald, and Ernest Hemingway would hang out there. Humphrey Bogart stopped in for a drink. George Gershwin is said to have composed American in Paris at Harry’s piano, for God’s sake. Even fictional famous people have visited Harry’s: James Bond claims to have lost his virginity there, and says it’s the only place in Paris to get ‘a solid drink.’

Harry’s isn’t just famous for its glittering clientele. It has a rightful reputation for creating and serving high quality cocktails. It has a strong (but not undisputed) claim to being the birthplace of the Bloody Mary, the French 75, and the Sidecar among other drinks. If you can claim three standard classics to your credit, you probably know what you’re doing.

And Harry’s does. The decor of Harry’s, littered as it is with layer upon layer of American college pennants, creates an atmosphere of perpetual Homecoming Game which is immediately undercut by the extreme politeness, professionalism, dignity, and cocktail knowledge of the waiter. It’s like he (and all his predecessors–he was quite young) have seen all the hijinx, but somehow rode above it all, serving excellent cocktails to movie stars, drunken frat boys, and boorish tourists alike. 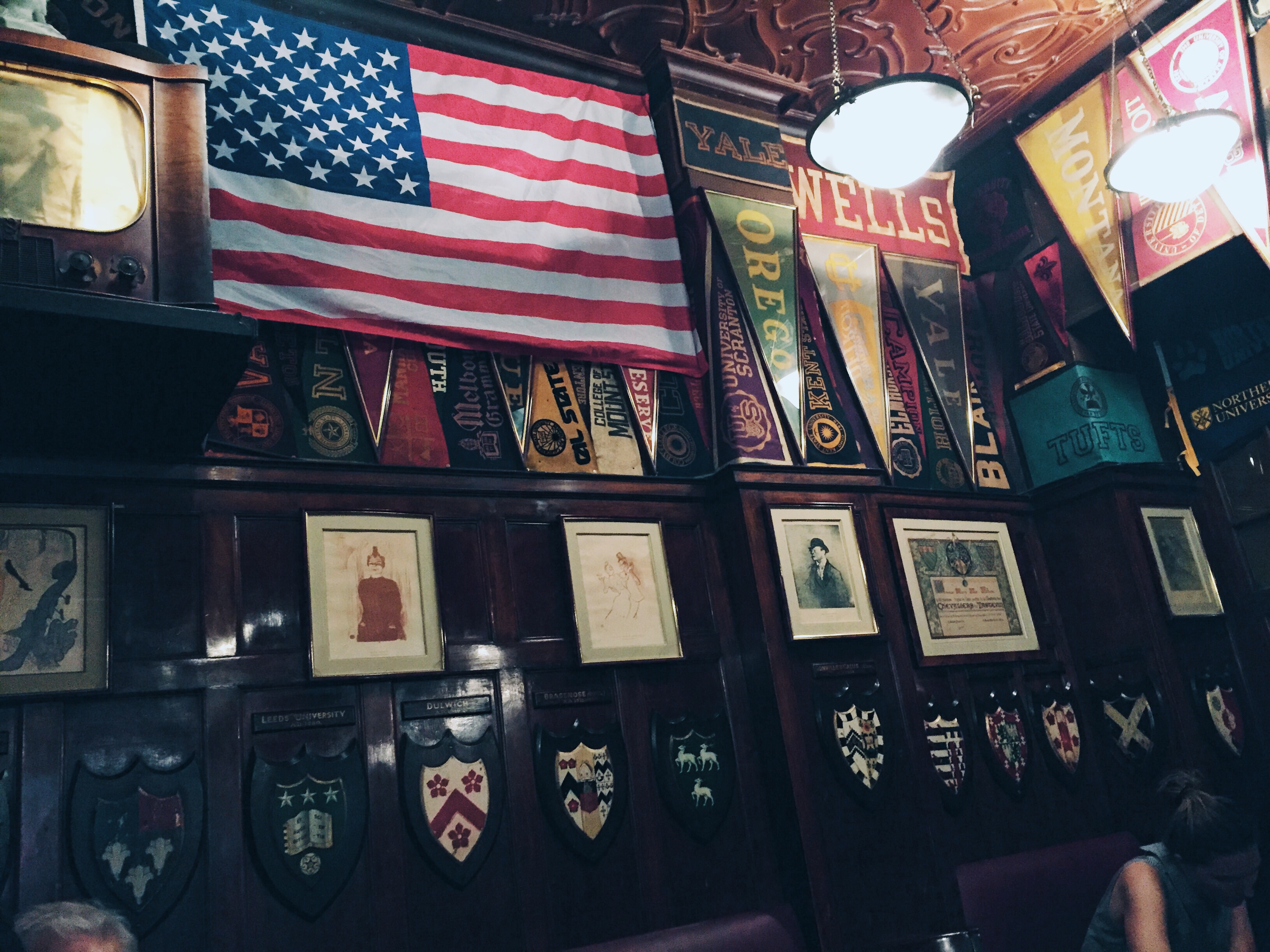 Harry’s will, as you would imagine, mix any of the standards for you; their menu is quite extensive. To narrow things down, we stuck to Harry’s creations, which cut our options down to a mere two pages.

Tasting one of the classics in the place it was (probably) created was irresistible, and it wasn’t the right time of day for a Bloody Mary or a French 75; so we ordered the Side-car. The drink was–as James Bond said–solid, and the experience was sublime.

We then moved on to more recent Harry’s creations.

The PFM was a somewhat deconstructed Manhattan. The waiter told us that, having served countless cocktails that start chilled and get warm over time, they wanted to try the opposite. So, they paired a stemless cocktail glass and a small ice bowl as a way to serve a room temperature cocktail that was chilled as you drank it. Perhaps we drank it too fast, but the effect wasn’t as pronounced as expected. The replacement of rye with Armagnac, however, was quite interesting. The Armagnac was just as spicy, but with a different set of spices and more sweetness.

The St. Louis was crisp and refreshing. We ordered it because we were curious about the tripling down of bitterness, with Campari, Suze, and grapefruit. It turns out that these three assertively bitter flavors round one another out when mixed, making for a complex, strong, but not overbearingly bitter final effect. 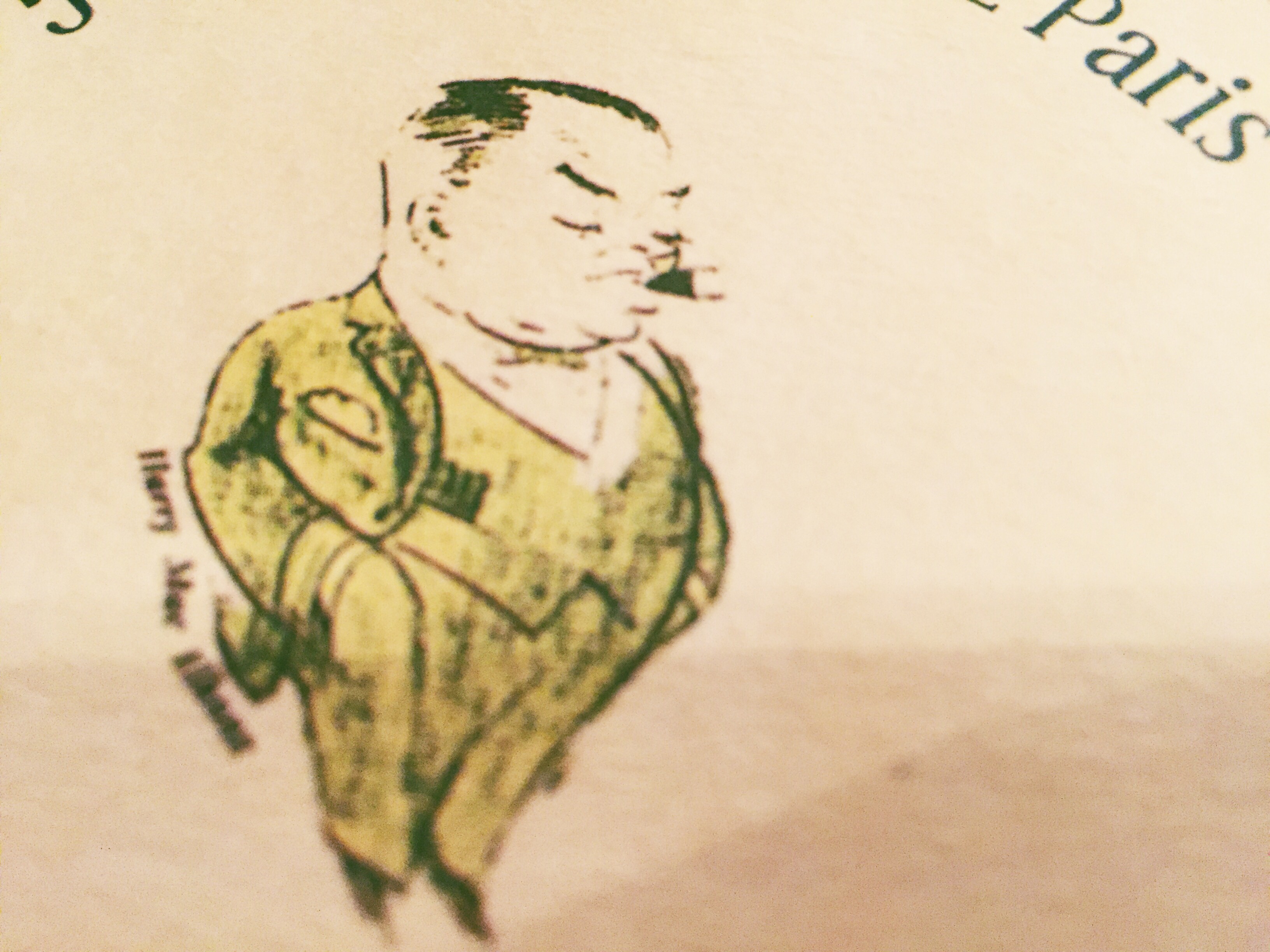 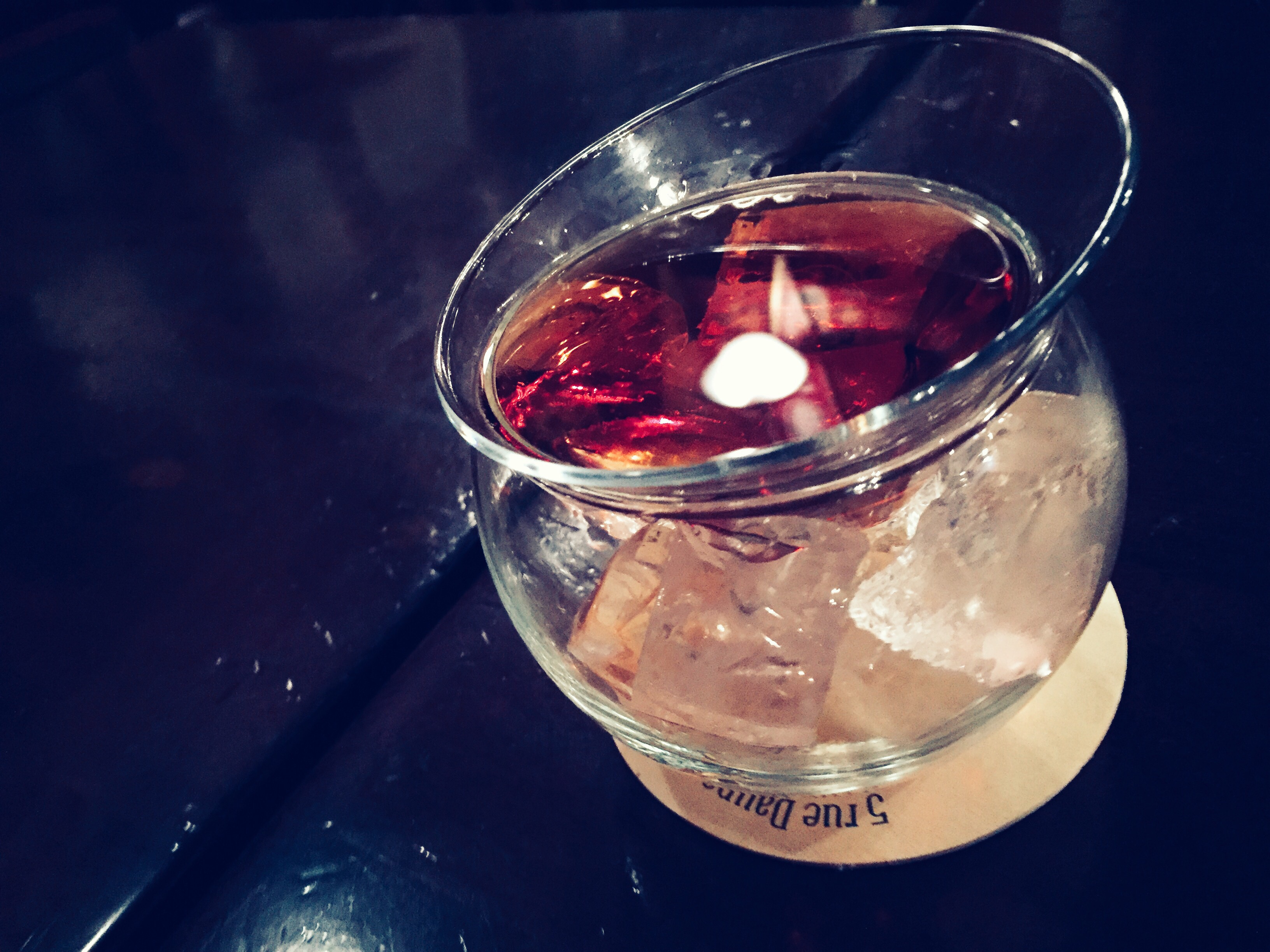 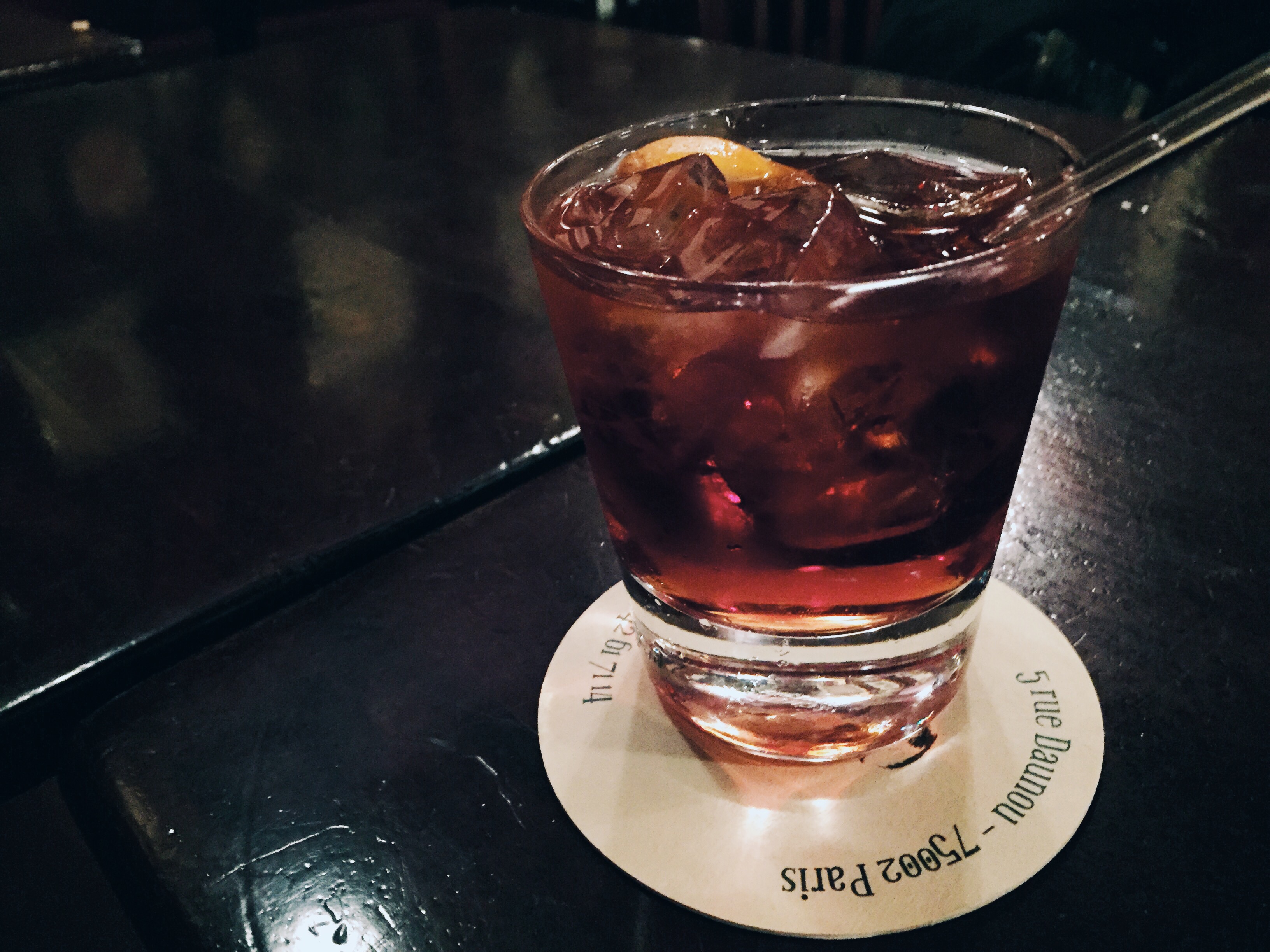 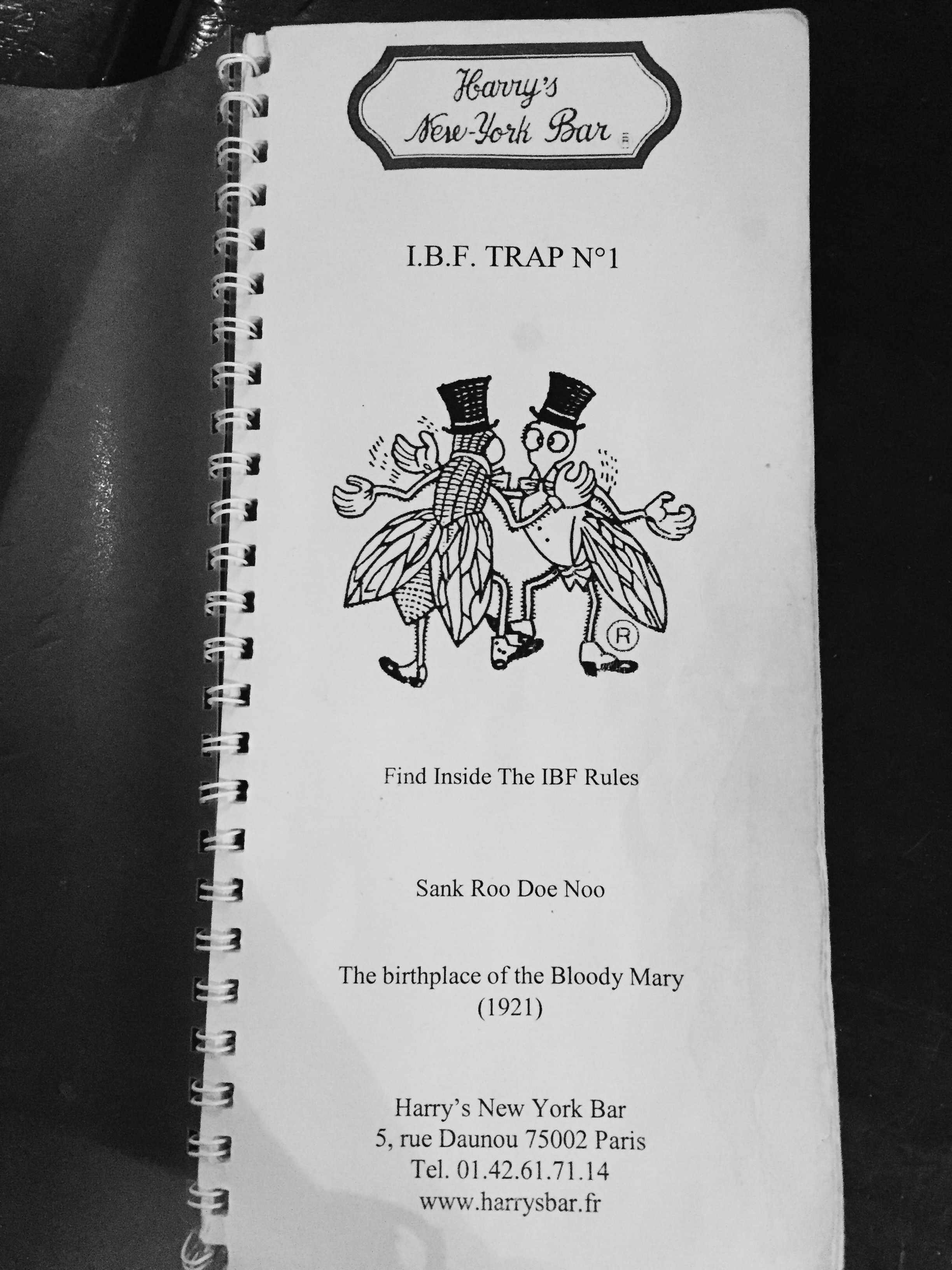 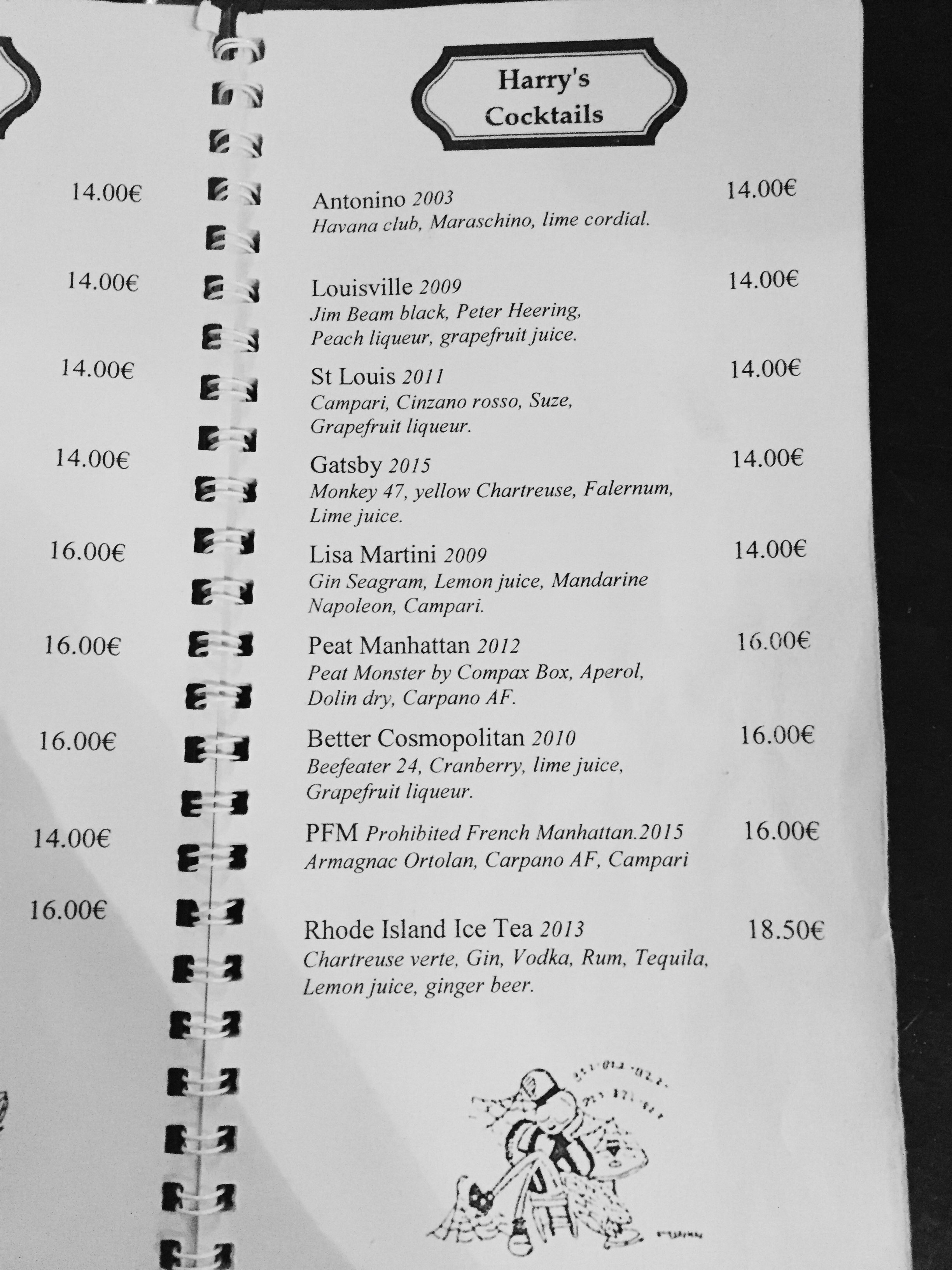 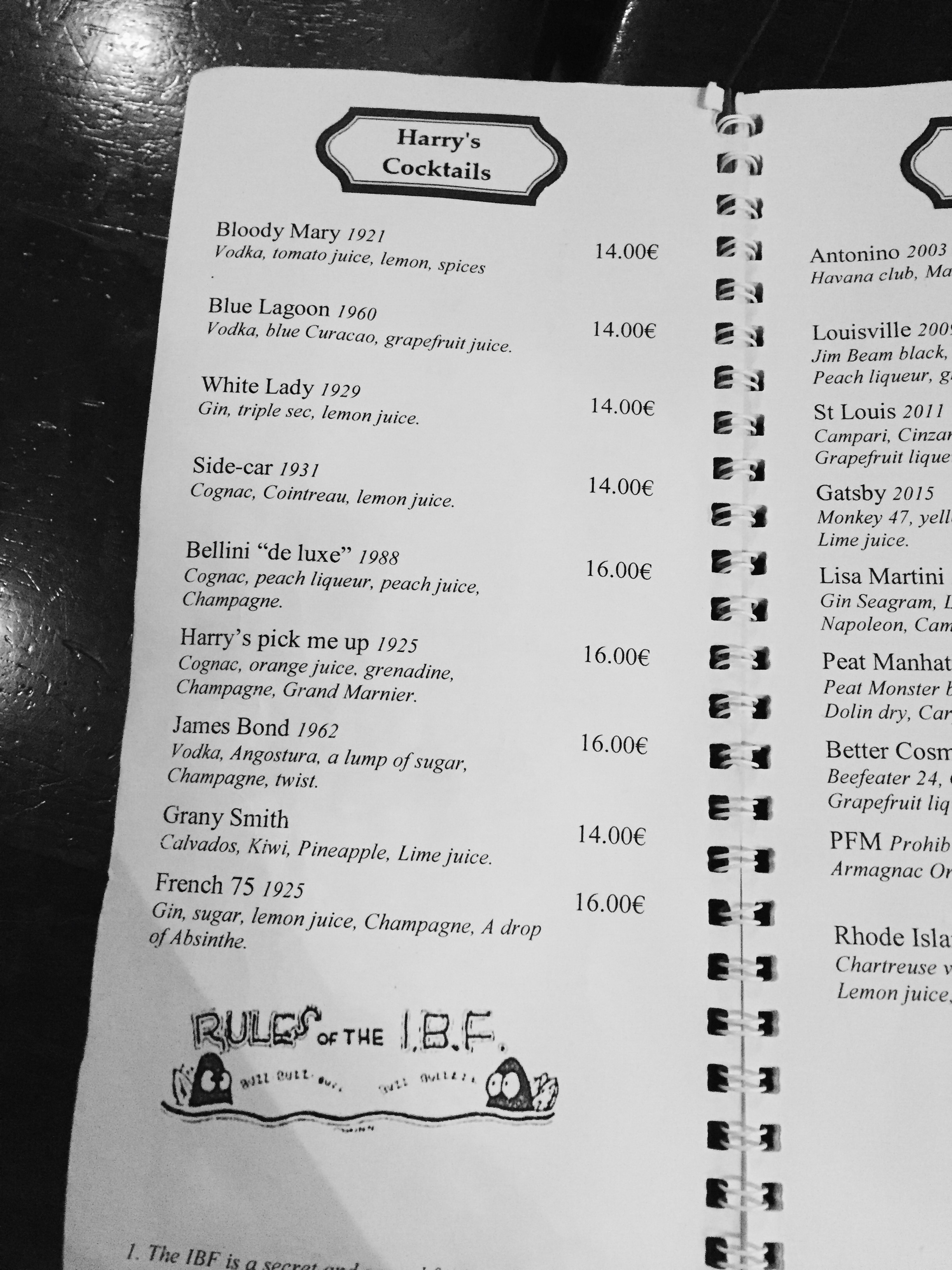 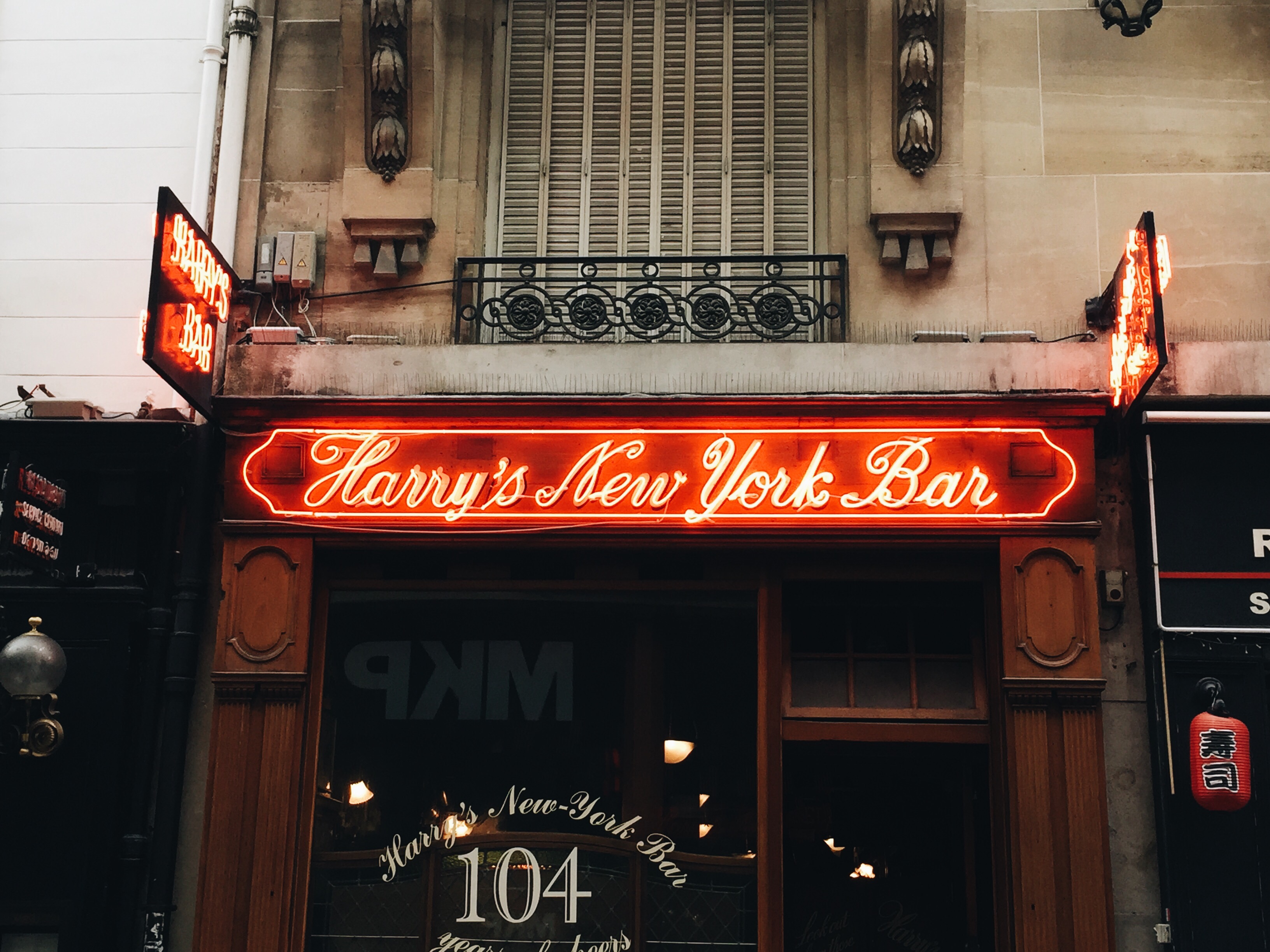 And for some of what we saw in France today