Based on its name alone, we expected Ivy City to be filled with Georgian mansions with old, leafy gardens or maybe to be a big, lush park. Imagine our surprise on our first visit there when we found trailing barbed wire instead of the promised ivy. With it’s empty lots, freight yards, and warehouses, it’s the opposite of scenic. It turns out, though, that large spaces, cheap rents, and neighbors who aren’t so particular make this little piece of the District’s rust belt a perfect place for a distillery.

There are actually four of them in this rather small neighborhood, all within an easy walk of one another. And while they operate on different schedules, it just so happens that there’s a window of time on Saturday afternoons when all of them are open for visits and tasting. So, last Saturday afternoon, I took a walking tour of Ivy City’s alcoholic attractions. 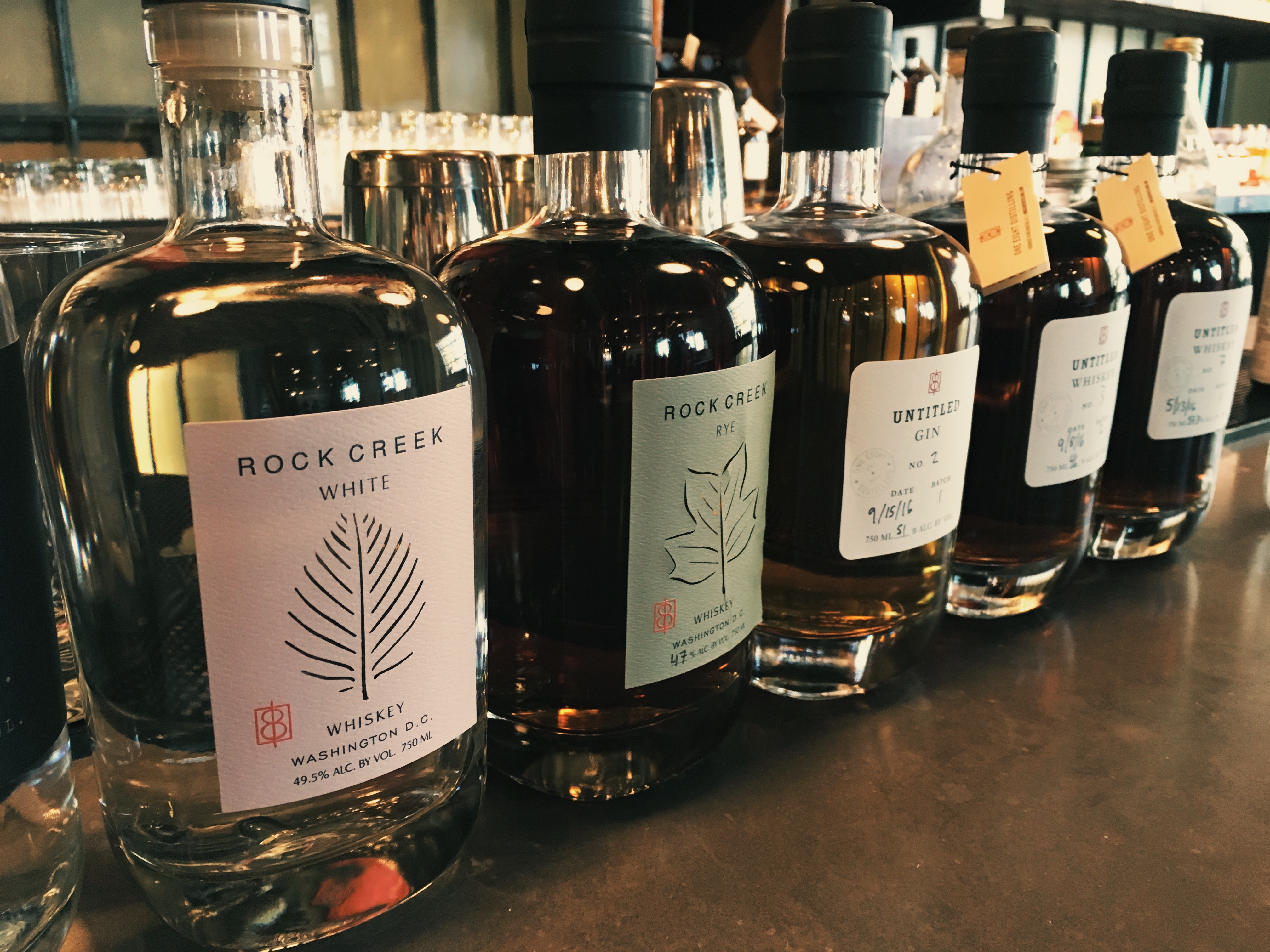 Stop One: One Eight

Since I had taken the tour just one week before, at the release party for Rock Creek Rye–the first made-completely-in-DC aged whiskey since Prohibition–I skipped it this time and hung out at the bar. It was quiet, which offered me a nice opportunity to chat with the bartender Vince and house manager GianCarlo as they experimented with new drink designs and discussed the upcoming release of a second batch of Rock Creek, which apparently turned out quite different from the first one.

This old fashioned was a great way to put their new rye front and center. I appreciated the deft touch with the fernet. It made me think I’ve been overusing it. Maybe it’s actually best used as an accent note, as they did here.

Vince the bartender was full of good tips and interesting ideas. Be on the lookout for future posts on some of them. The nugget I’ll share for now: think of white rye as a replacement of silver rum.

Many new distillers sell white (i.e. unaged) whiskey, because it takes time for whiskey to age and you need to sell something in the meantime. These white whiskeys are often quite interesting, but we haven’t known what to do with them. They’re a little rough to drink straight, and so different from aged whiskeys that you can’t really use them in typical whiskey drinks. Vince’s pearl of wisdom: use white whiskey as a substitute for another unaged spirit, silver rum, instead. 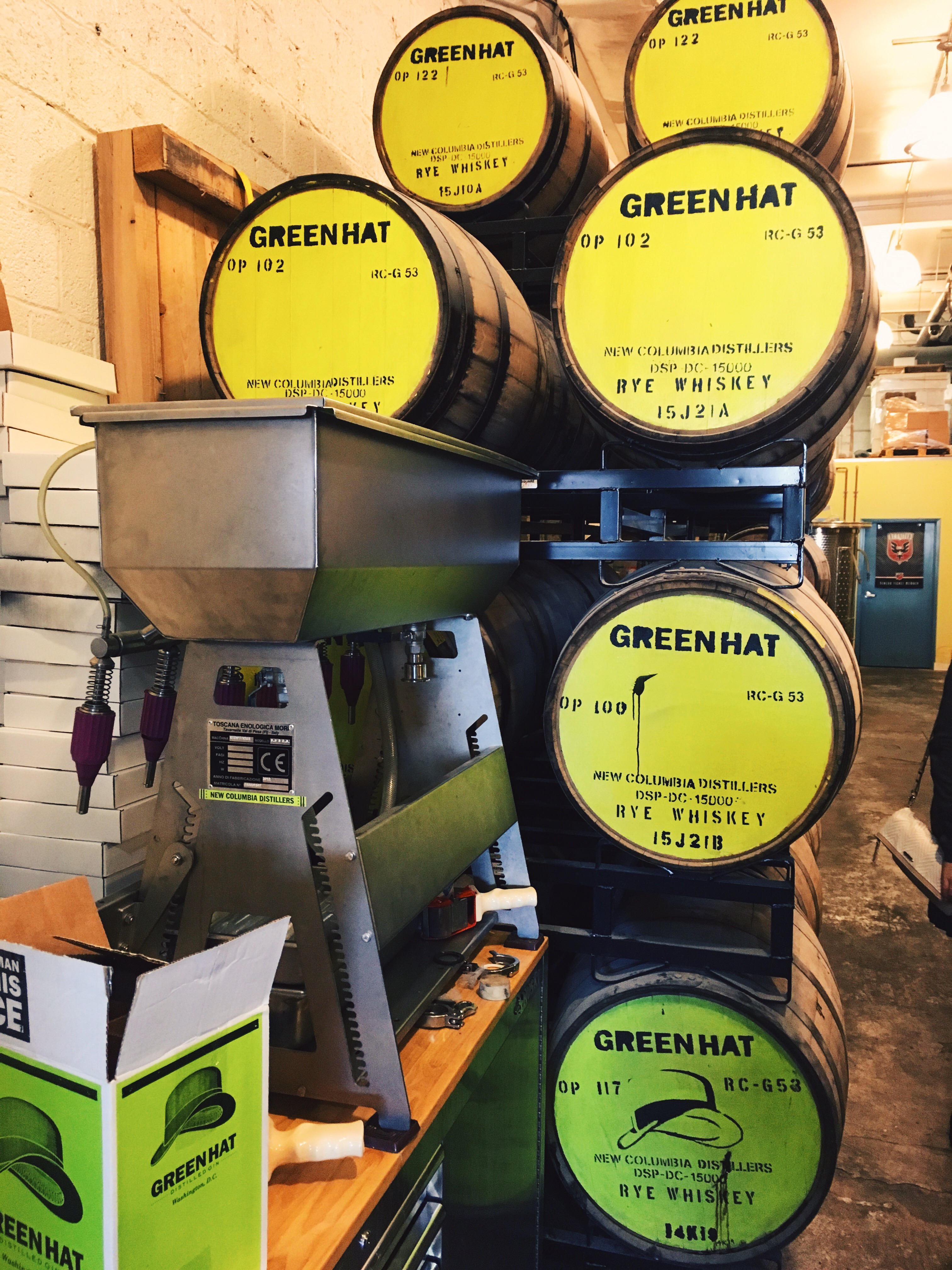 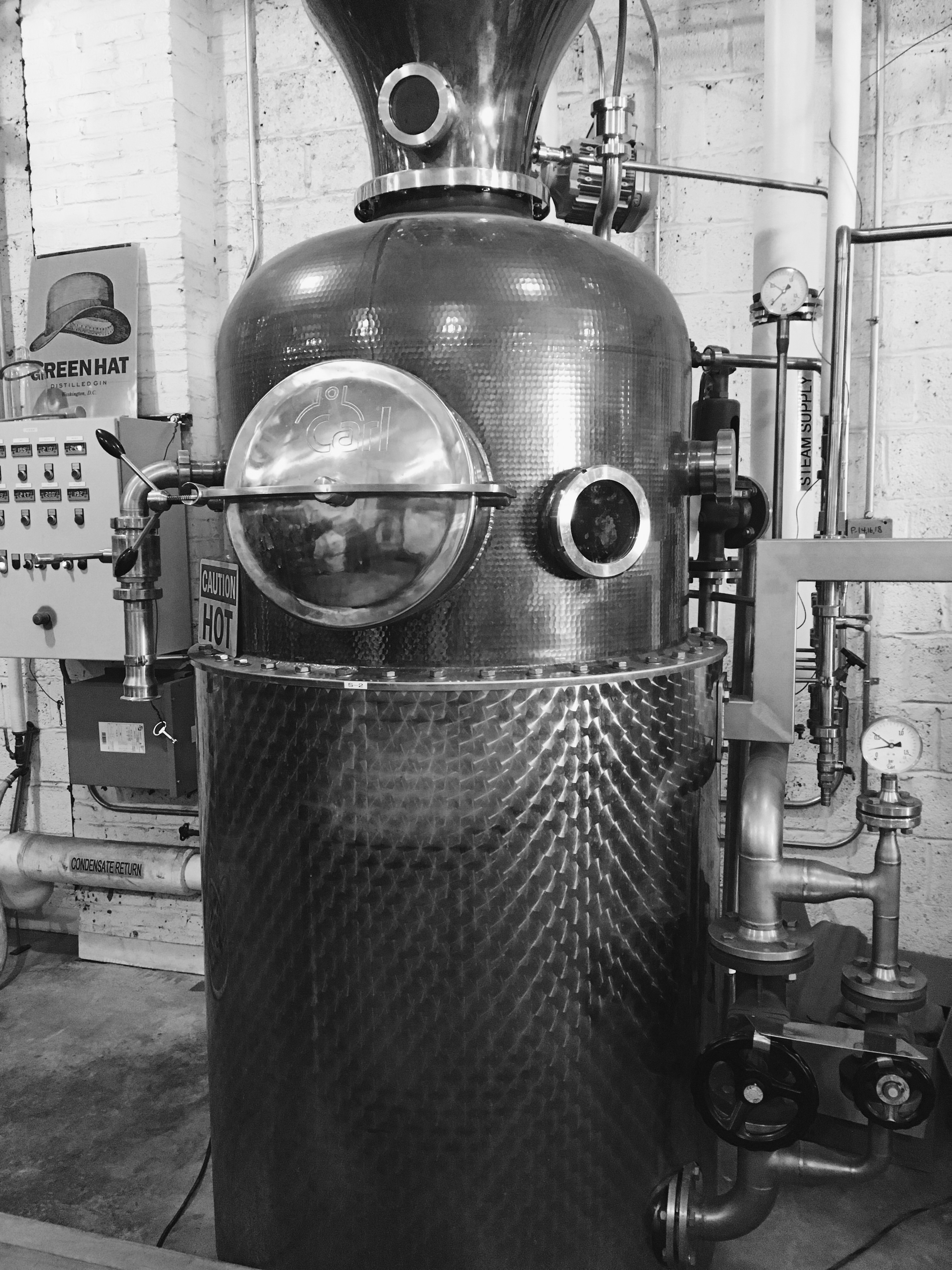 This is the only one I hadn’t ever visited before. It’s a smaller space than the other three, and while the others have permanent tasting rooms, New Columbia does theirs pop-up style on cool rough wood tables. The tour is short (in both time and distance) and informal, but with plenty of interesting tidbits about their distilling process. For instance, while they were waiting for their license to distill, they practiced by infusing vodkas with the various botanicals they were considering and mixing them to get a sense of how the flavors combined.

The Virginia 75 was a refreshing local take on the French 75; I particularly appreciated the use of hard cider rather than the standard sparkling wine. The thing that really impressed me, though, was the spirit they used in it. New Columbia offers seasonal gins, and for the 75 they used their current fall/winter gin, which they’re calling Ginavit because it contains the botanicals common in a Scandinavian aquavit: caraway, rye, and anise. It’s then mellowed and sweetened through resting in apple brandy barrels. They’ve run out of apple barrels; so this is a limited release. If it sounds interesting, hurry out today.

They call their gin Green Hat in honor of George Cassidy, DC’s most famous bootlegger during Prohibition, who went by the name of Man in a Green Hat. 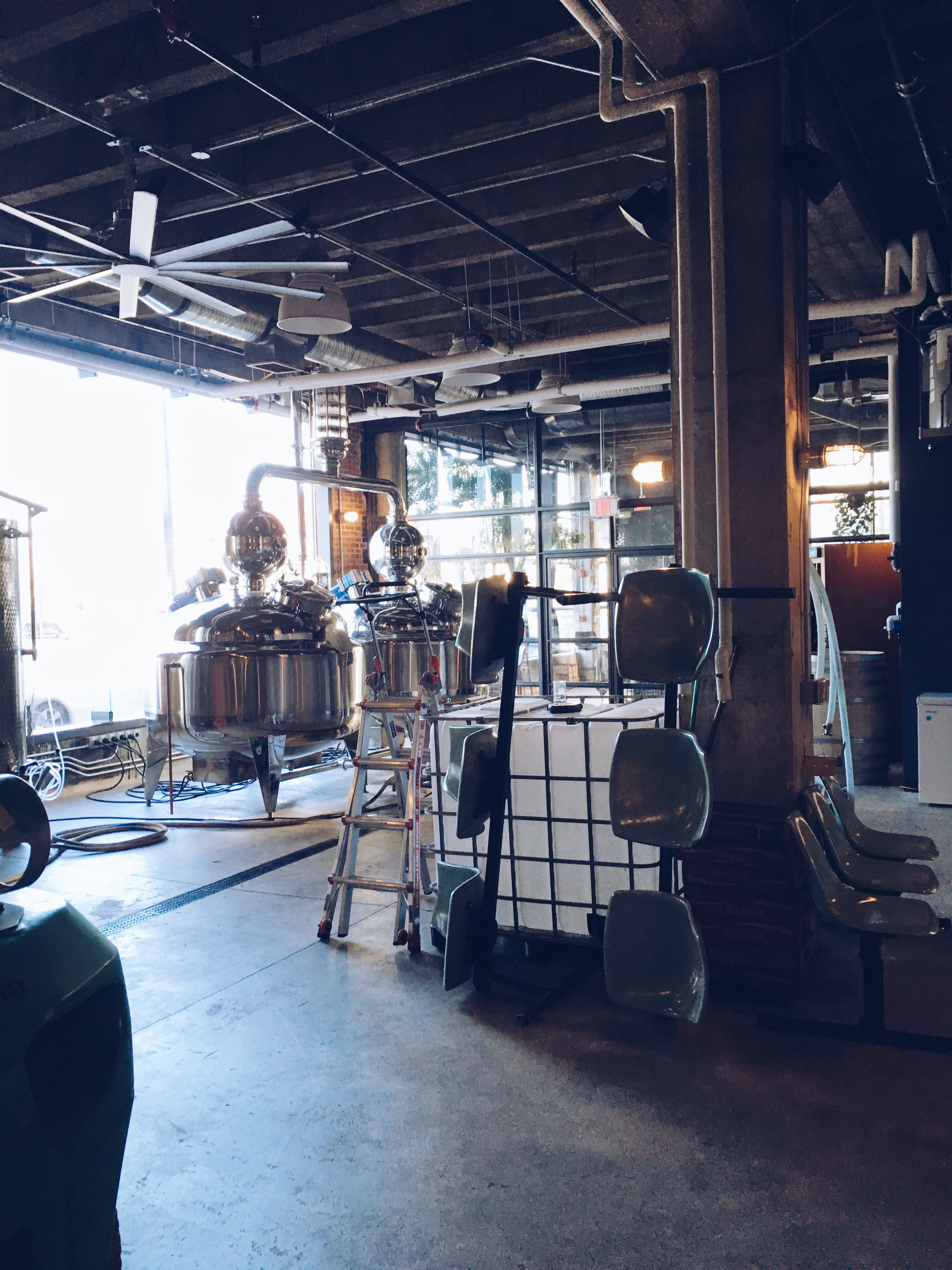 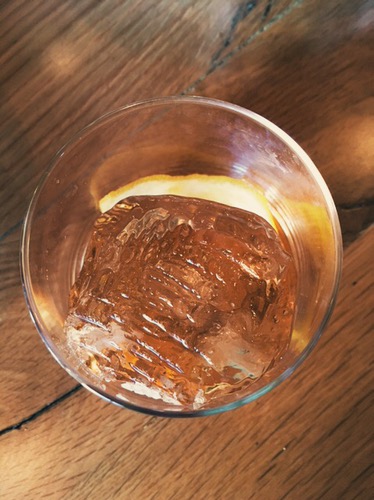 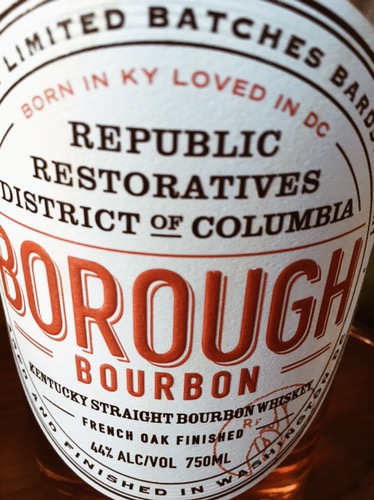 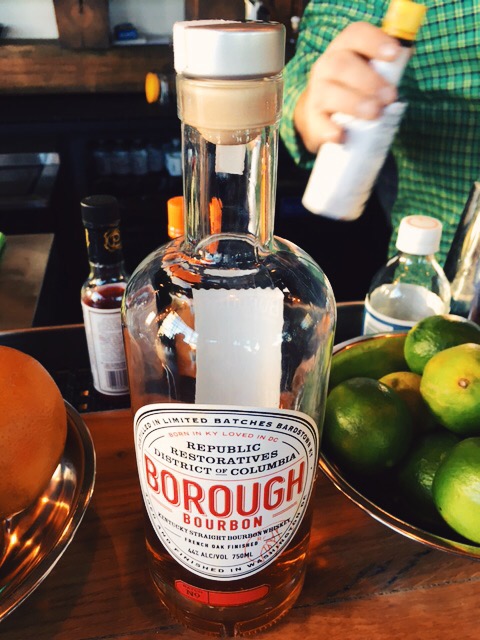 Republic has the most pleasant of the tasting rooms, a large open space with big windows that, in one direction, let lots of daylight in (a rare and delightful feature in cocktail venues) and, in the other, gives a great view of their twin kettle still.

To my great surprise, I happened to visit on the day they were unveiling their new Bourbon. Being only a year old, they haven’t yet had time to age their Bourbon. So to get things rolling (as common an approach as selling your white whiskey) they sourced Bourbon from elsewhere to finish themselves, which they did by finishing the aging in white wine barrels. This white wine finish gave it a pinkish hue, and pleasing notes of caramel and vanilla.

I know that a standard old fashioned isn’t exciting, but today was a day for giving new whiskeys their spotlight, and this old fashioned with its simple orange peel and large ice cube was the perfect form for enjoying Borough, as its called, in small sips.

The bartender gave me a book recommendation: Sasha Petraske’s Regarding Cocktails. I’ll report back later. 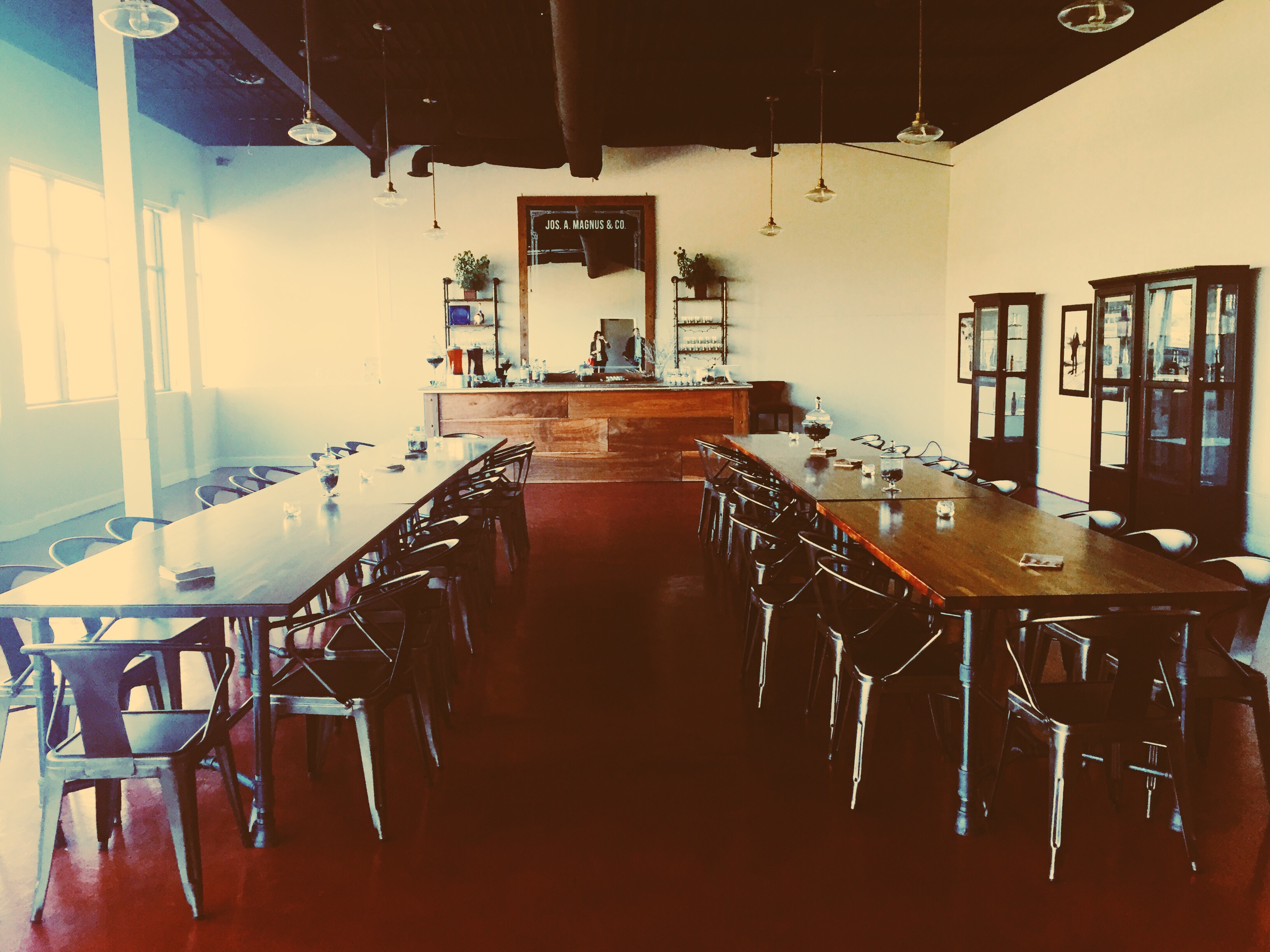 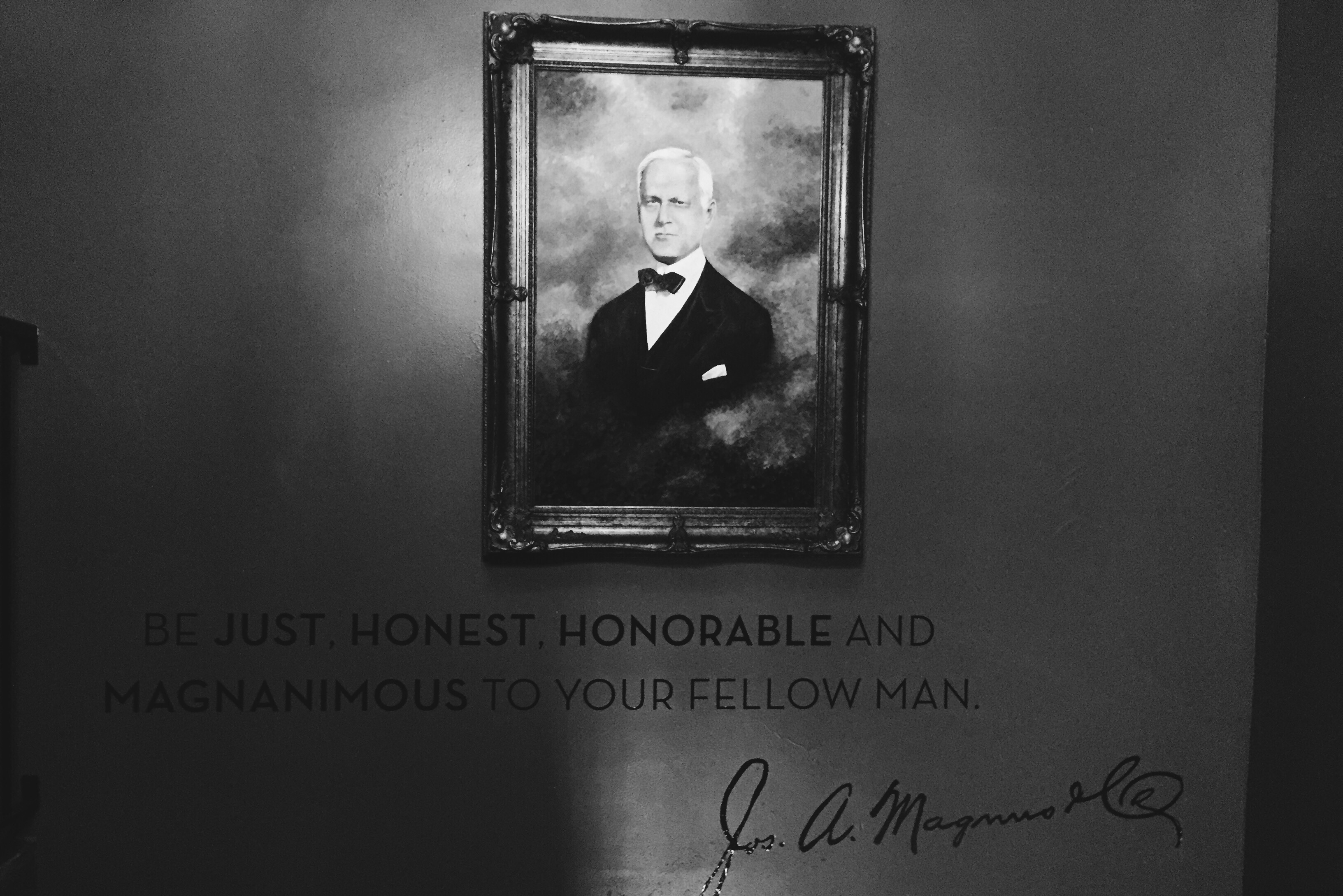 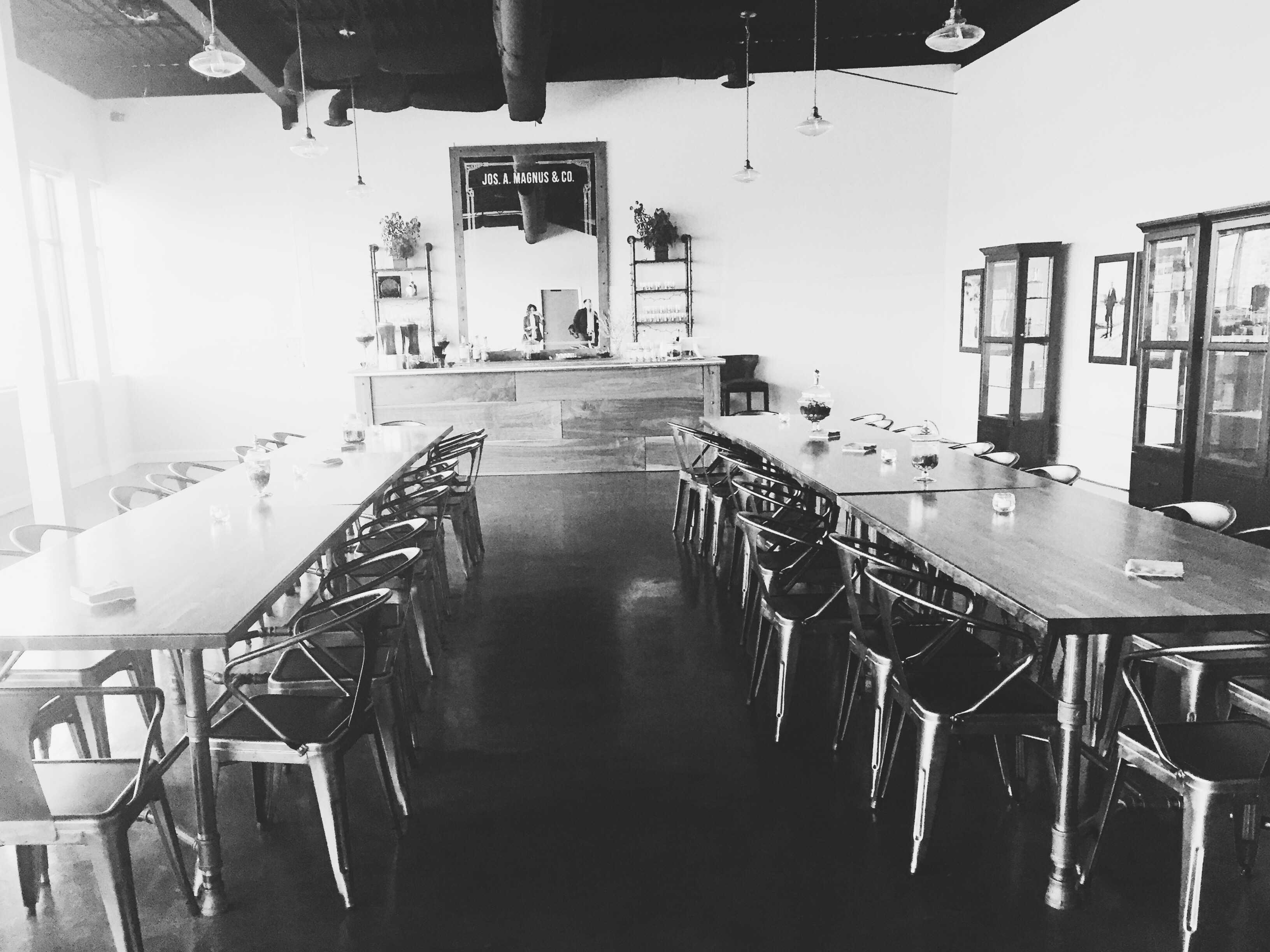 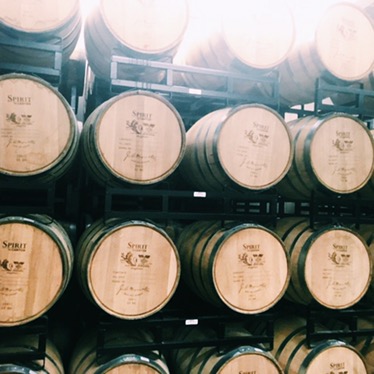 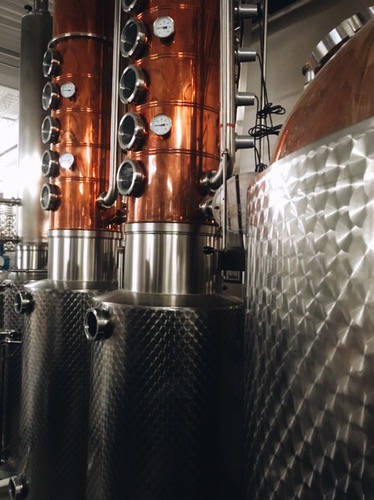 We’ve mentioned before how much we love the Murray Hill Club, which is what Magnus calls its tasting room. As its more extensive hours hint at, the Murray Hill Club is less a tasting room and more an out-and-out cocktail lounge. We had quite decent cocktails at all four of the distilleries on our crawl, but with the others it feels a bit like they are distillers first and drink makers second; drinks are the delivery system for their (deservedly) beloved spirits. At Magnus, they’re more ambidextrous, giving equal attention to their spirits and their cocktails. Sitting down at their big copper bar for a drink or two was a great way to end the tour of tours.

Both of these drinks were beautiful to look at, and to taste. We jump at every opportunity to drink Don Ciccio & Figli’s fennel liqueur, and it was only made better by the addition of fennel tonic. The fig extract gave the drink a depth you wouldn’t expect from an herbal, gin-based drink.

Obviously, the Cinnamon French Toast Flip is something of a gimmick, going to great lengths to include everything you need for a good, hearty breakfast (if you count the grains from the Bourbon as your toast). Gimmicky or not, it was amazing how well it worked. This was a delicious drink. The deep, complex sweetness brought by the combination of maple, sherry, and Bourbon was made impossibly light by the addition of the egg.