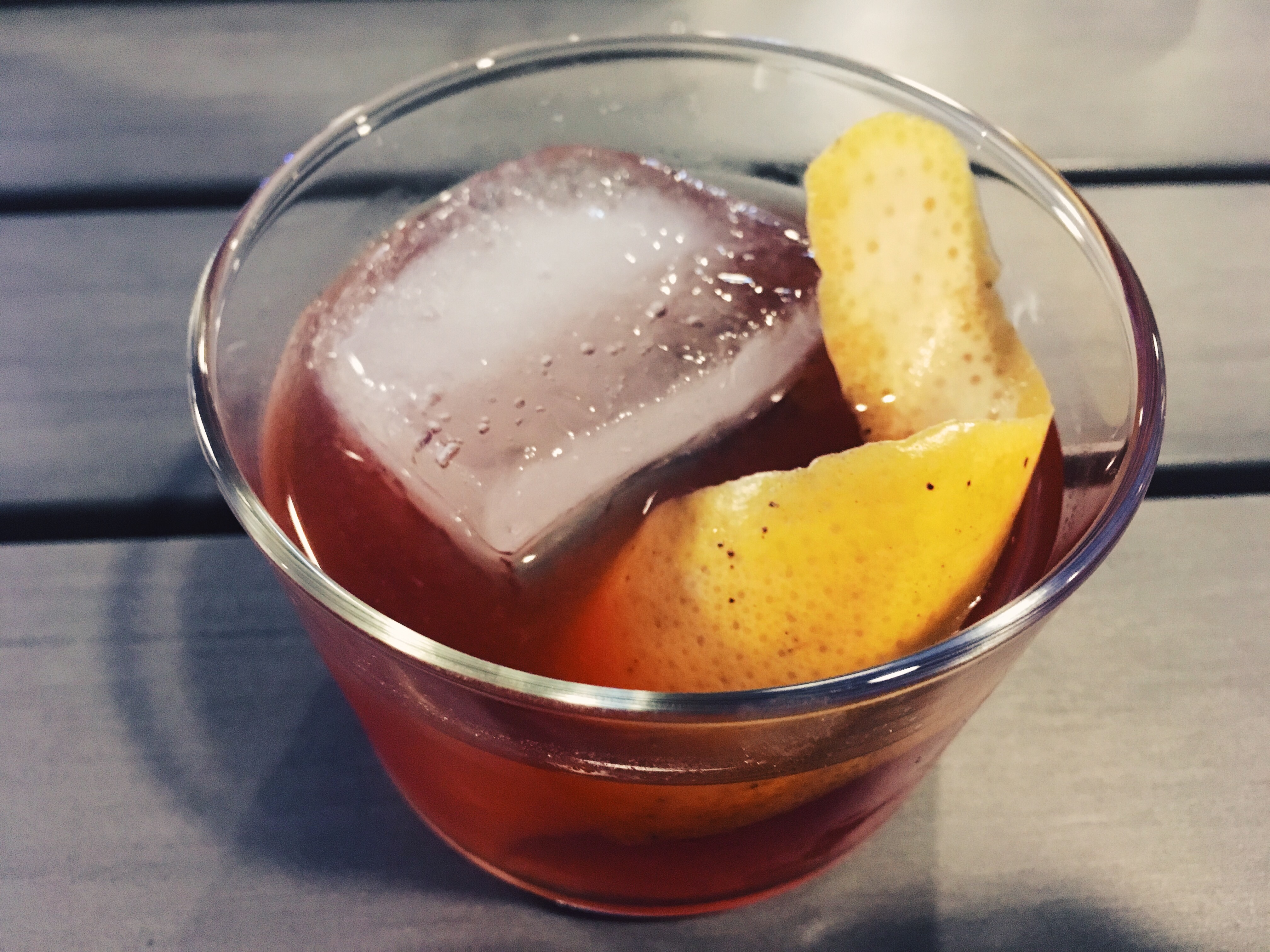 01 Nov Where You Should Be Drinking: Hank’s on The Wharf

One thing we heard again and again when we moved to DC was, ‘You’re coming here at a good time. You wouldn’t believe how much the city has changed in just the past few years.’ Now, a mere two years later, it’s something we say to people new to town. Vacant spaces become apartment buildings and abandoned warehouses become markets, distillers, and restaurants at a dizzying pace . Exhibit A is the Southwest Waterfront. When we moved here, it was just mud and a few pylons. Now, it’s the city’s ‘It’ neighborhood, completely with a fancy new name, The Wharf.

We watched its progress practically on a daily basis; you get a clear view of the complex both from the highway and from the national park in the middle of the Potomac where one of us gets their daily exercise. Nonetheless, when it was finally opened a couple of weeks ago, it felt like a neighborhood sprang from the Potomac fully formed, like Athene from Zeus’ head. We decided we needed a closer look; so we met there after work for an early dinner this week.

There’s something Disneyland-like about it. It’s brick and mortar–and glass and steel–and something imaginary at the same time. Just like Disneyland, that somewhat unsettling mix of fantasy and reality is nonetheless done extremely well. The Wharf is a broad boardwalk with excellent views of a picturesque part of the river, of East Potomac Park in the middle of the river, and of the sunset. The boardwalk is dotted with nice little spots for sitting, with pleasant fountains, and with public art. After dinner, we walked out a long pier into the middle of the river, and sat at comfortable modern art benches next to a firepit/sculpture hybrid to eat some ice cream and watch the bobbing lights of yachts on the river. 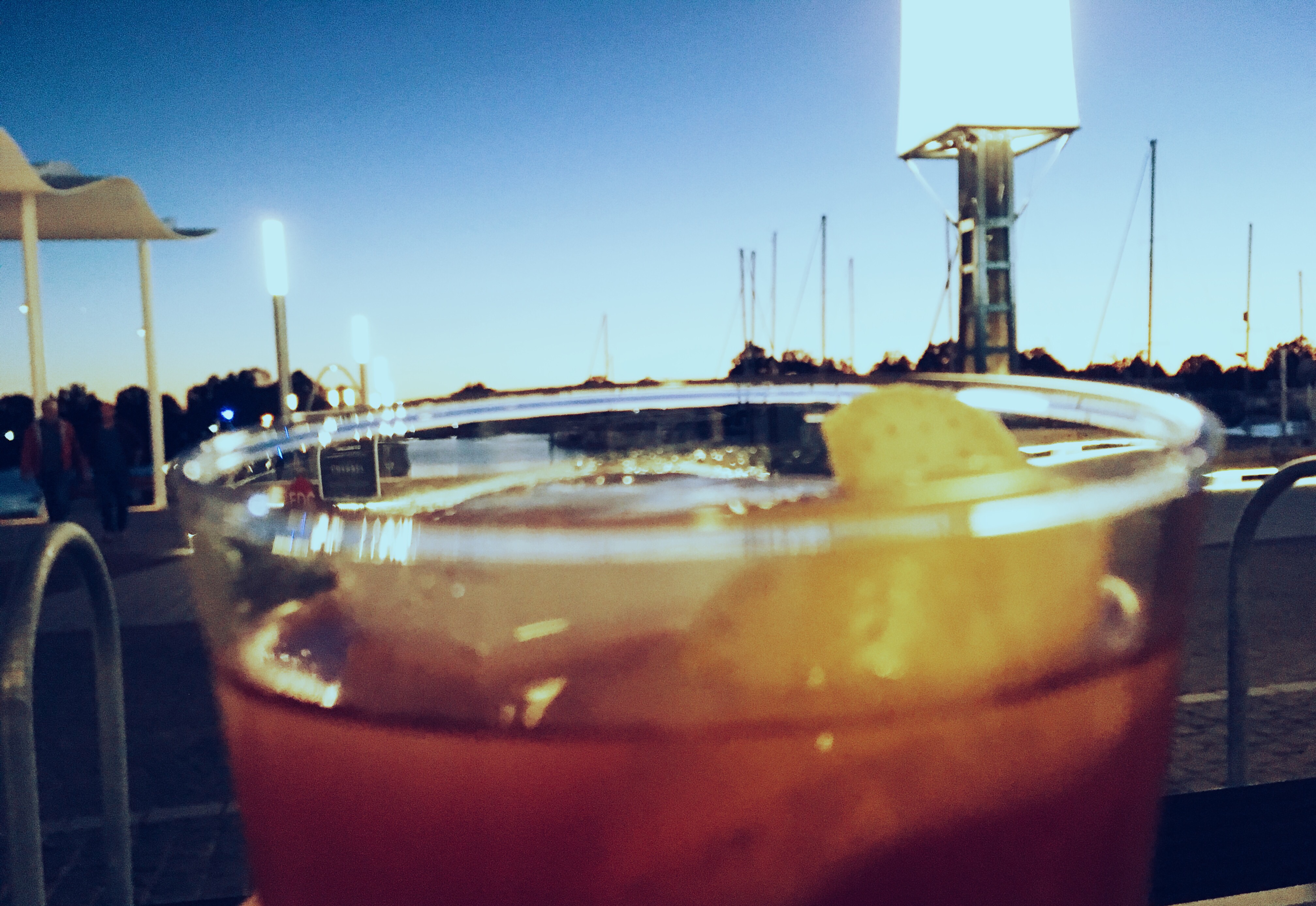 For dinner, through a Goldilocks process–the other options being either too fancy or too pubby–we ended up at Hank’s Oyster Bar. Hank’s is great, but there’s also a Hank’s in our very own neighborhood; so it wasn’t strictly necessary to go to The Wharf for it. We were glad therefore to discover that they have different cocktail menus at the two locations. At the Wharf, the menu includes a few especially innovative options: draft cocktails, to share cocktails suitable for 2-4 people served in custom flasks, and a complete section of beer cocktails. This time around, we went with the draft.

We’re guessing from the name that this drink is a Negroni, with Bruto Americano instead of Campari, somehow infused with figs and blackberries, and then again somehow served on draft. That sounds like a somewhat convoluted path, but it led to a simple, very pleasing drink. It was well-integrated, as draft, cask, or punch drinks tend to be, with a luscious fruity flavor and accent marks of bitterness. It was well worth changing neighborhoods for. 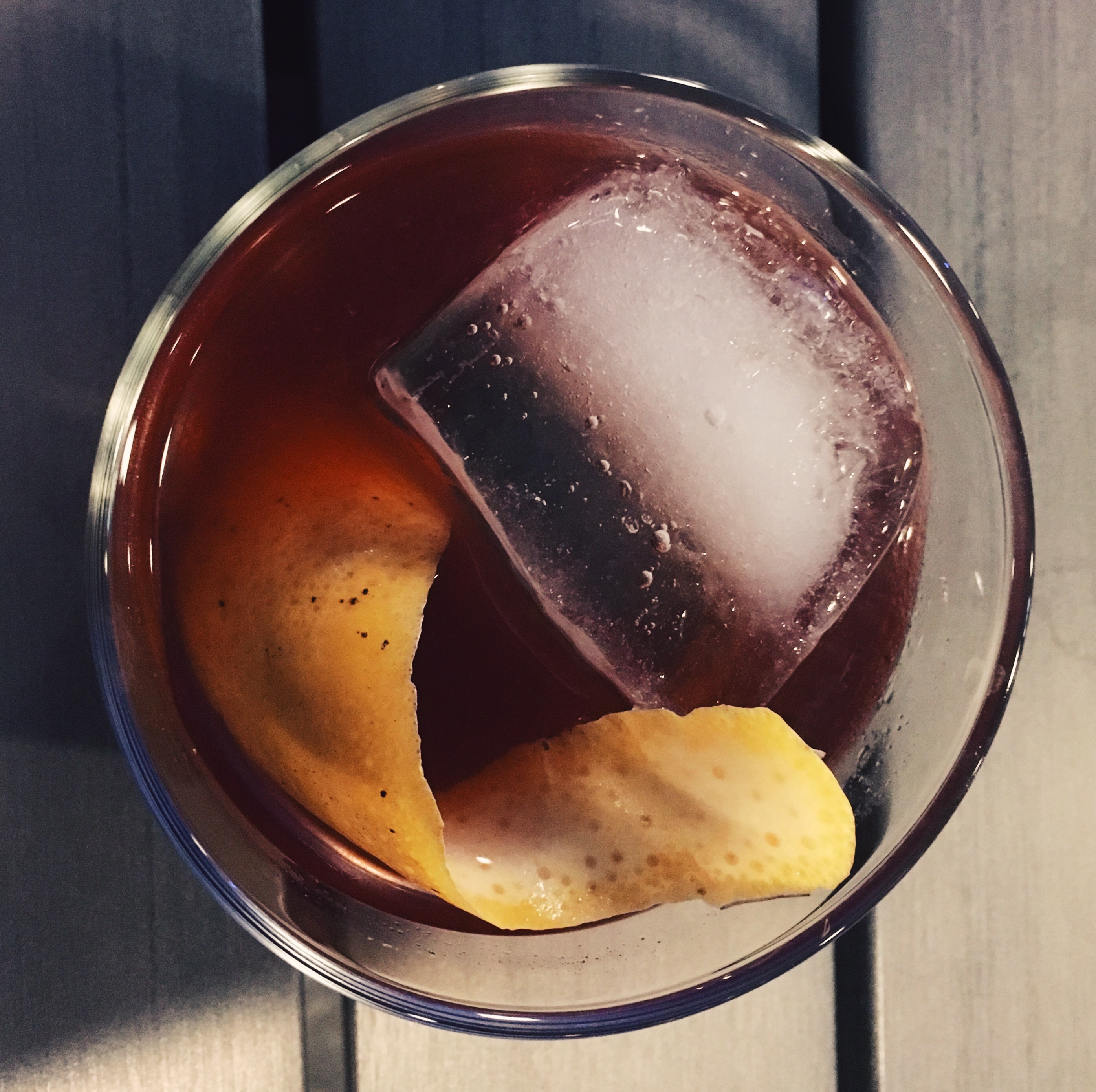 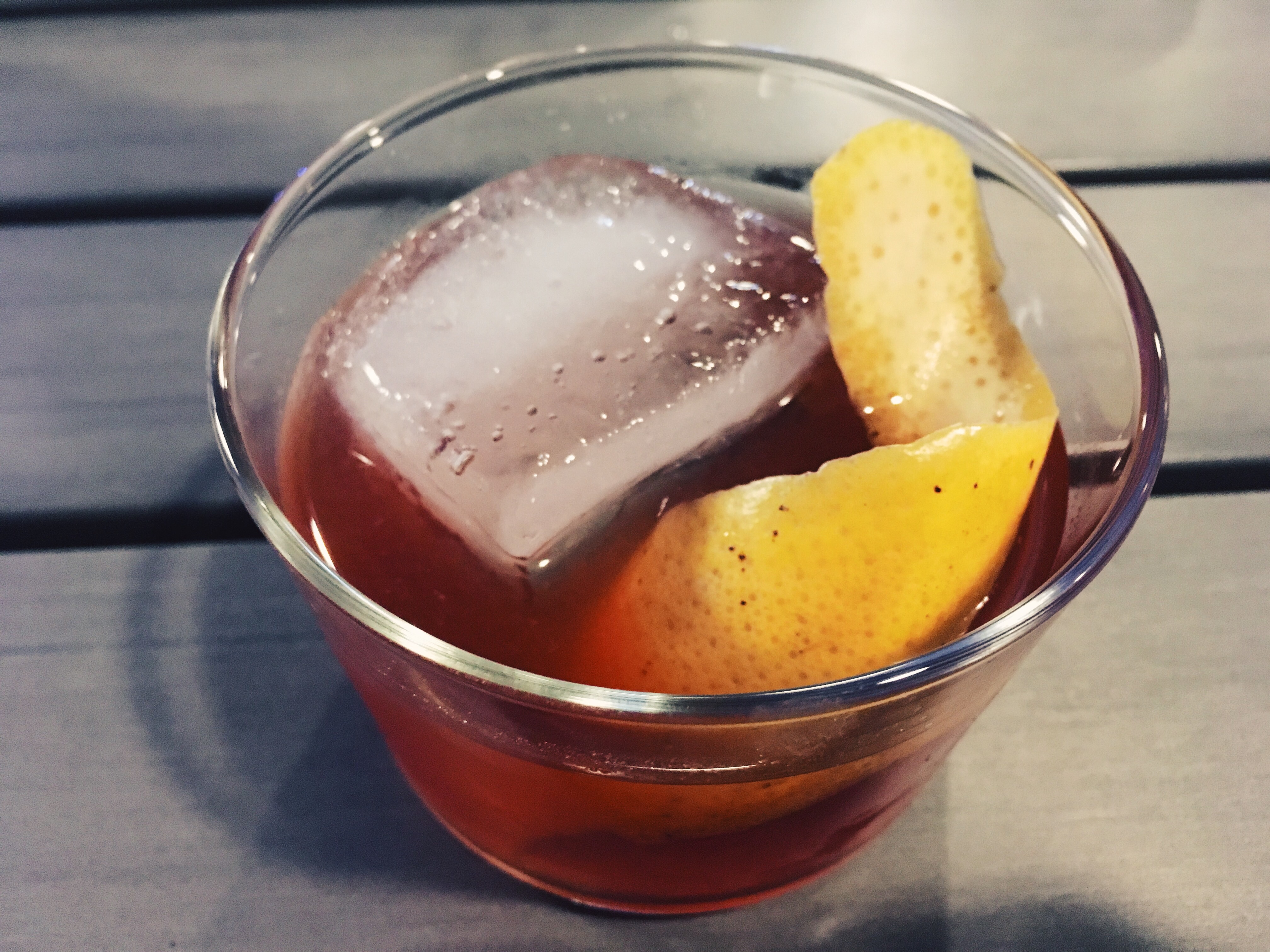 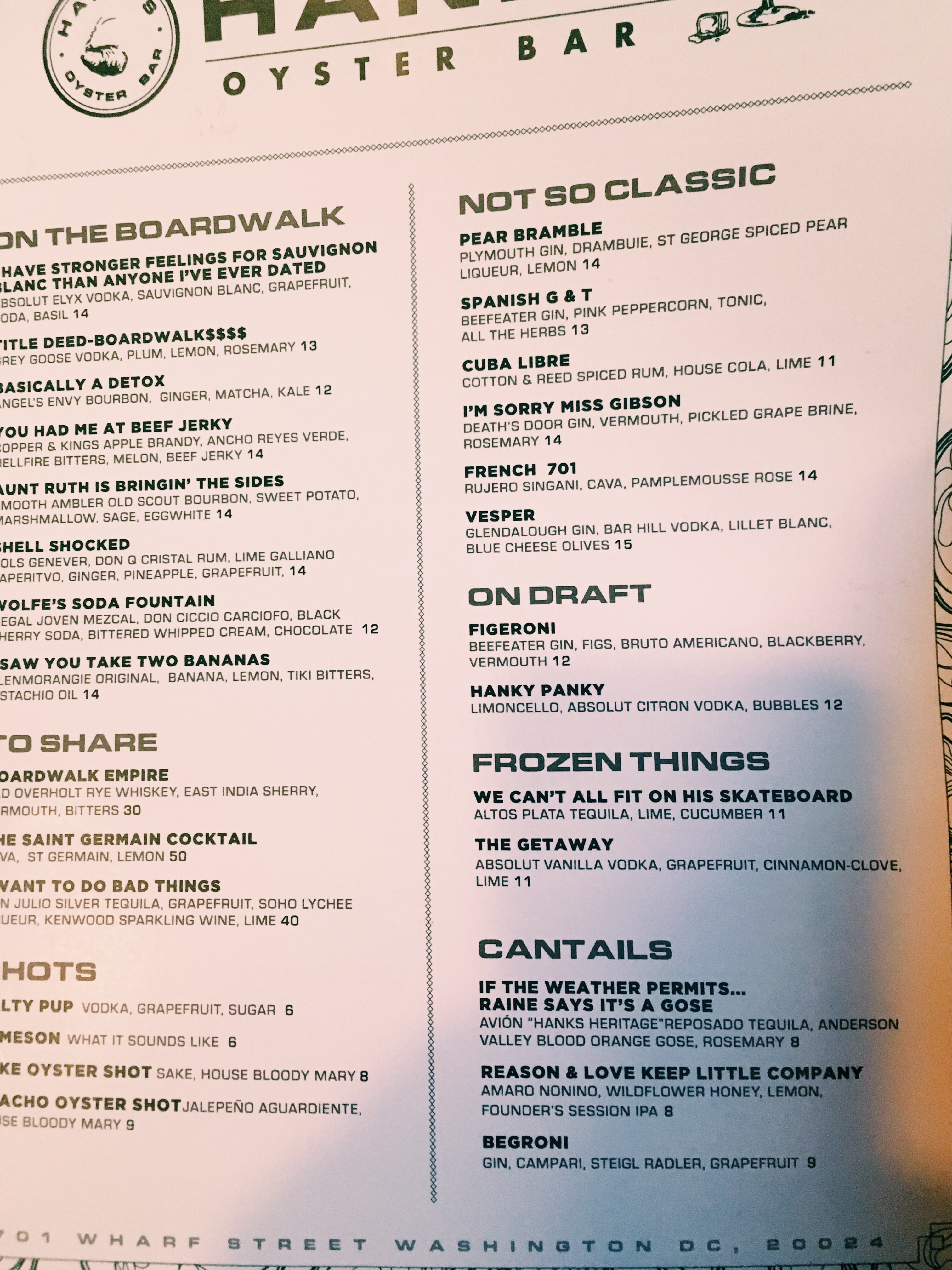