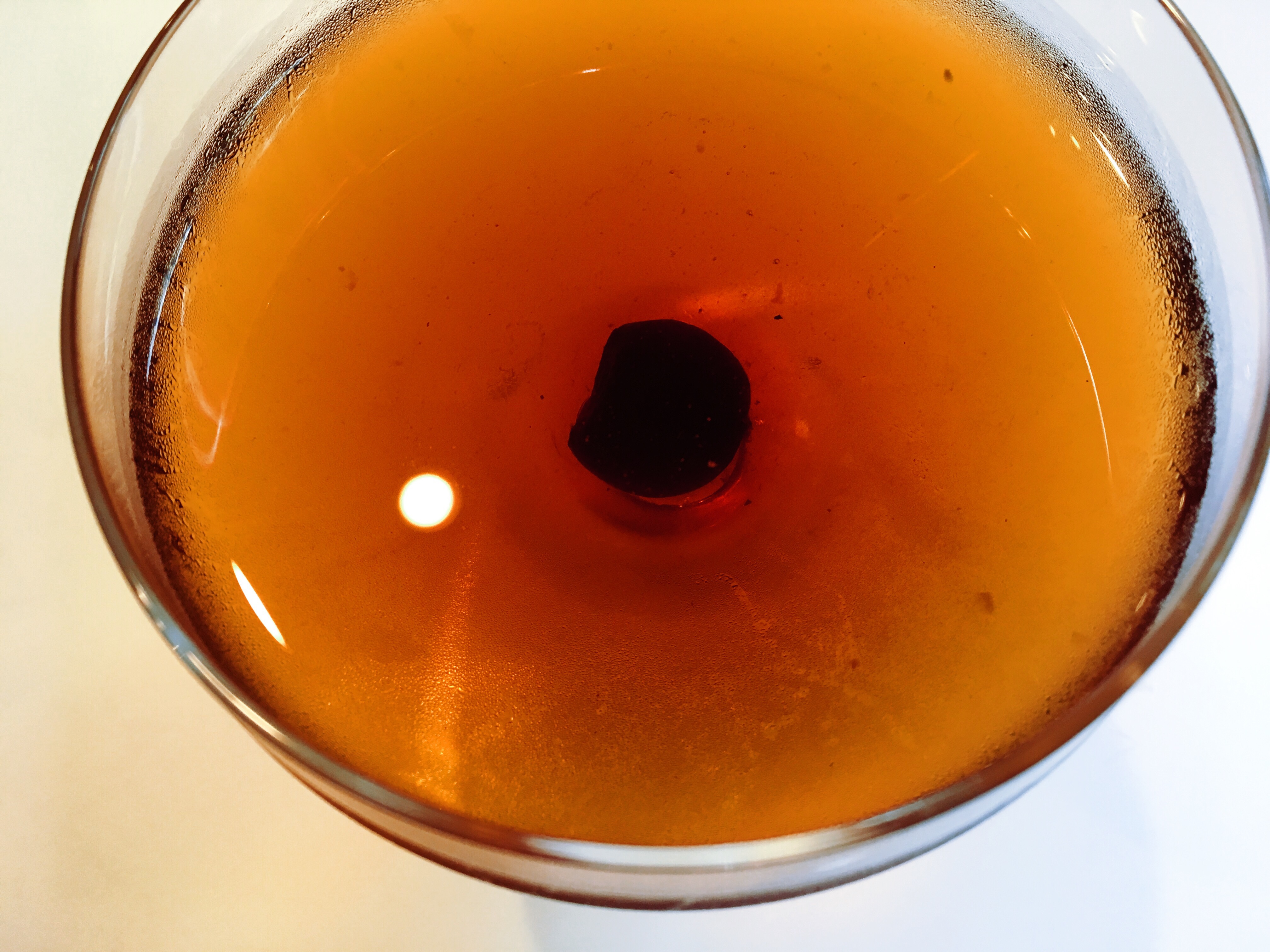 We’re not island types. It’s not a mistake that our entire adult lives have been spent in big, hard-charging, businesslike cities. We know, however, that a key to successful urban living is, every once in a while, escaping to the beach. We follow the practice in real life, and we thought it was about time we did the same in our cocktail consumption. So, this week we’re dipping our toes into tiki. If our little taste of tiki leaves you wanting more, we’d suggest Martin and Rebecca Cate’s tiki textbook, Smuggler’s Cove, as the source of all of the tiki knowledge you’re likely ever to need.  Smuggler’s Cove tells a fascinating tale of the rise and fall and rise again of the tiki bar.

Yesterday and the day before, we talked about how during the 1930s Donn Beach’s fanciful imagination of island life provided an attractive and popular escape from the everyday doldrums of the Depression. ‘If you can’t get to paradise, I’ll bring it to you,’ as Beach said (LATimes, May 1, 2011). During the 1940s, for the first time a large mass of Americans did get to the islands, but as soldiers and sailors in WWII; so the islands weren’t exactly in their most paradisiacal form. Their return home accelerated tiki culture; they enjoyed tiki bars as reminders of the far flung places they’d seen, but in an idealized form, and absent all of the gunfire and death. The tiki wave kept rolling right through the 50s and 60s.

And then it finally crashed in the 70s. It was a victim of its own success, aided by the growth of commercial air travel. Once tourists could travel in droves to actual Pacific islands, what had earlier felt like a magical taste of faraway lands started to seem instead cheap and fake. Tiki became tacky. What had been fanciful now felt  inauthentic at best, if not downright culturally insensitive.

On top of all of that, the drinks got bad.

There too, tiki bars were a sort of victim of their own success. During tiki’s heyday, Donn Beach and his rival Trader Vic closely guarded many of their recipes. Some of the secrecy was playful, part of the theater of tiki, adding to the sense of exoticism and mystery. So, for instance, Beach is alleged to have hidden the true identity of one of his ingredients by calling it ‘Munrelaf.’ You don’t necessarily need the Enigma machine to crack that one. Some of the secrecy was serious business, though. Don the Beachcomber and Trader Vic’s were quickly growing empires, some of the first chain restaurants; and they felt that their original recipes were the proprietary technology that gave them an edge on their rivals.  They protected their secrets fiercely. Beach even hid his recipes from most of his own staff, so that they couldn’t abscond with the recipes or sell them on the sly. A 1948 article from the Saturday Evening Post describes how he did it:

Infinite pains are taken to see to it that the service-bar help cannot memorize Don’s various occult ingredients and proportions. Bottles are label-less; they bear numbers and letters instead. The recipes are in code and the mixers follow a pattern of code symbols indicating premixed ingredients, rather than actual names of fruit concentrates or rum brands.

So, even if the bar back wanted to sell the recipe, all he could say was, ‘Well, the zombie is 5 oz of bottle #5 mixed with 2 tsp of syrup C.’

This strategy ultimately backfired. Unable to replicate Beach’s and Vic’s more sophisticated recipes, other tiki bars simply offered cheap knockoffs, watering down the whole tiki brand. People continued drinking them for a while, but tiki’s reputation as a serious cocktail tradition was shot. Eventually, the grand idea that was tiki was relegated to cheap rum drinks at poolside bars.

And as Beach and Vic and the handful of bartenders who knew the original recipes began to pass away, there was a real chance that true tiki cocktails would become completely extinct and unrecoverable. We wouldn’t know know what a Mai Tai or a Zombie is really supposed to taste like if it weren’t for Beachbum (aka Jeff) Berry. Don’t be fooled by Beachbum Berry’s cover identity as a shambling citizen of Margaritaville. He’s really a tireless, hardworking combination of investigative reporter and counterintelligence expert. He spent years tracking down copies of the out-of-print books Trader Vic released to cash out late in life, and finding and interviewing old, retired bartenders from the top tiki bars, and Rosetta-stoning those old bartenders’ bar notes, obscured as they were by code and by shorthand.

We end with a different sort of tiki drink. Most drinks involve at least a little juice, and a lot of cracked ice and shaking. The old ‘rhyme’ about tiki drinks, as we mentioned on Monday, is, ‘One of sour, two of sweet, three of strong, and four of weak.’ This one replaces the sour with bitter, and is decidedly lacking in weak. So, if you want something a little more spirit-forward, but still with that sugar and spice we expect from tiki, give this bitter but smooth drink a try. 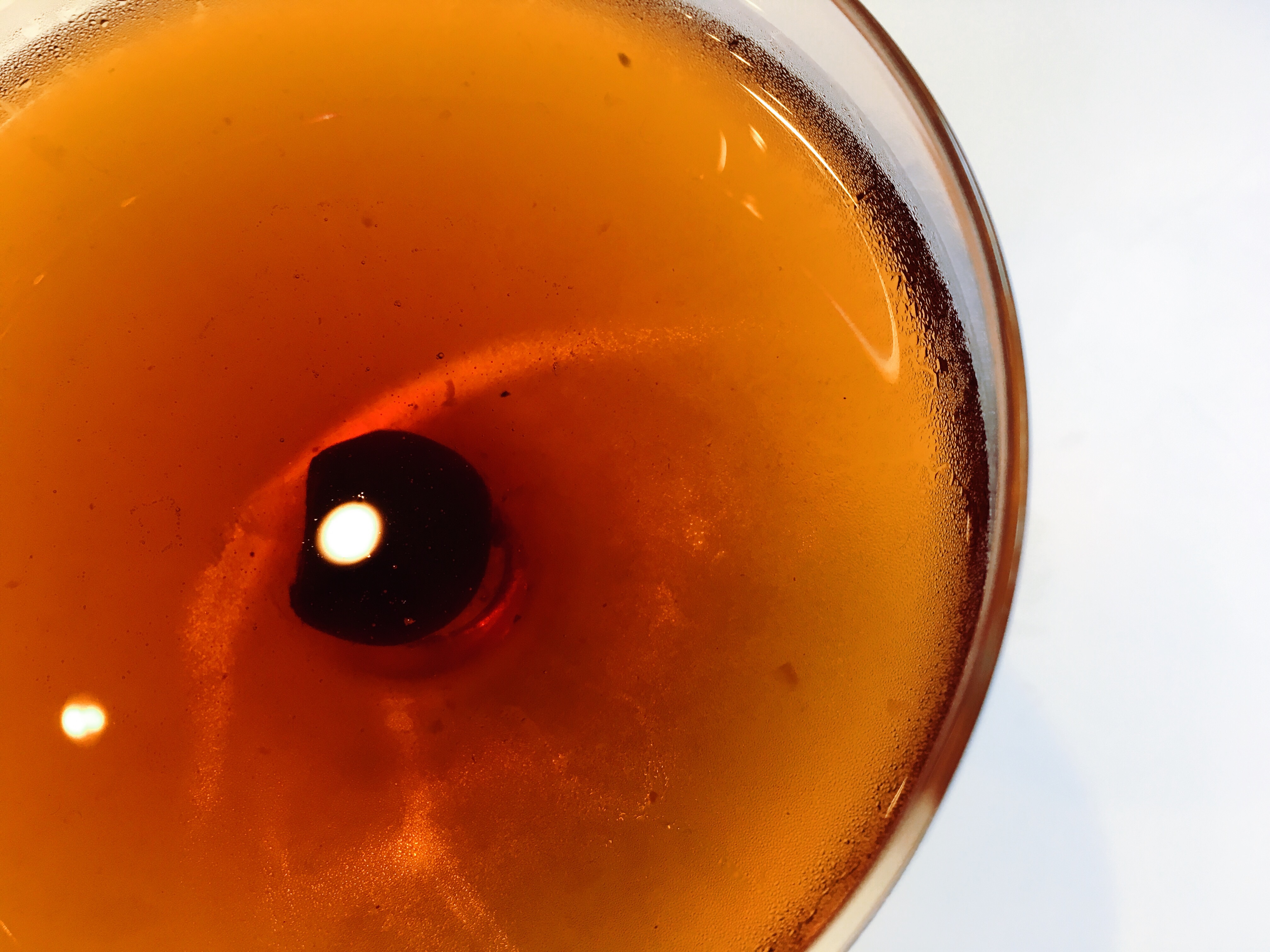 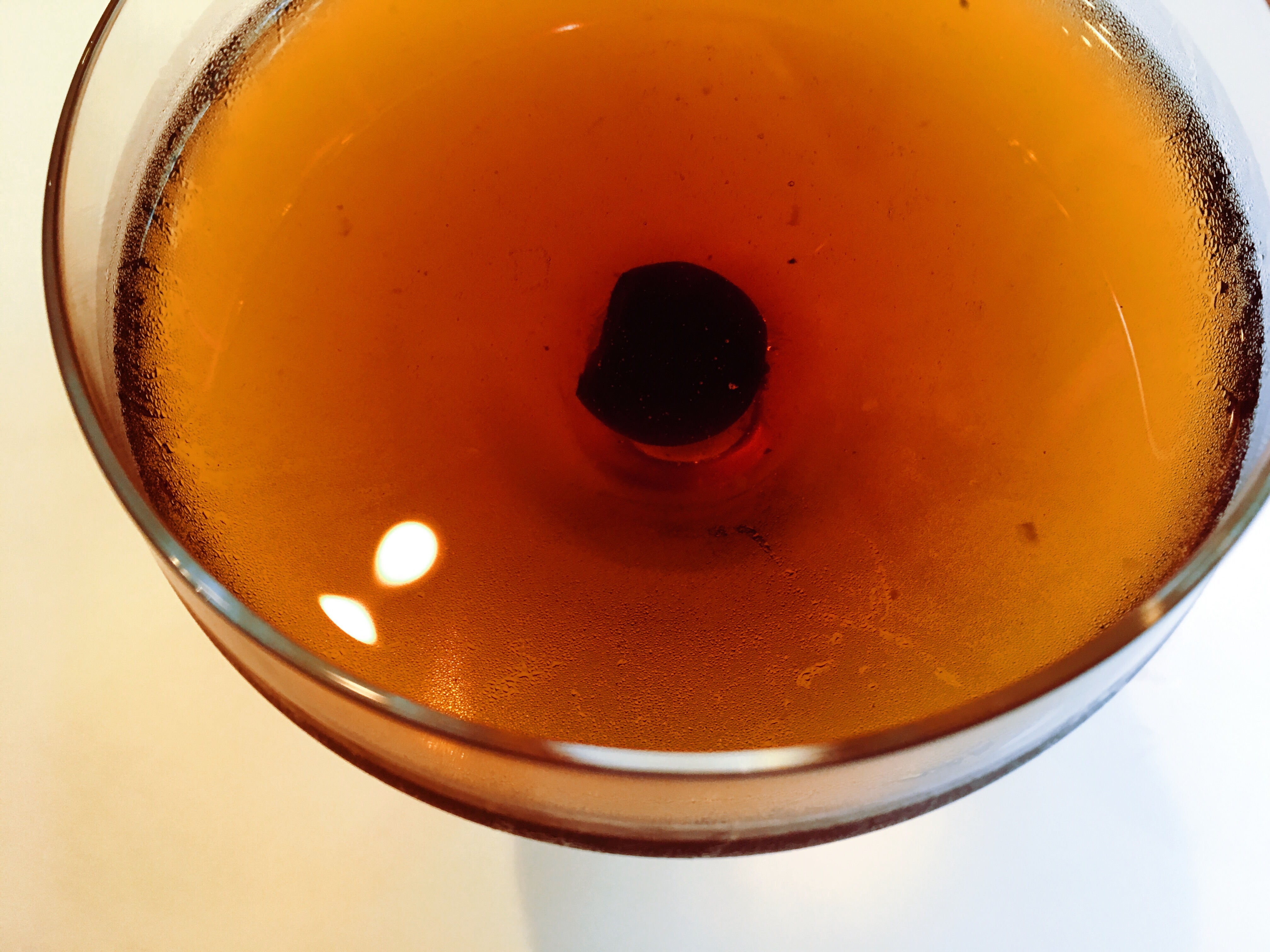 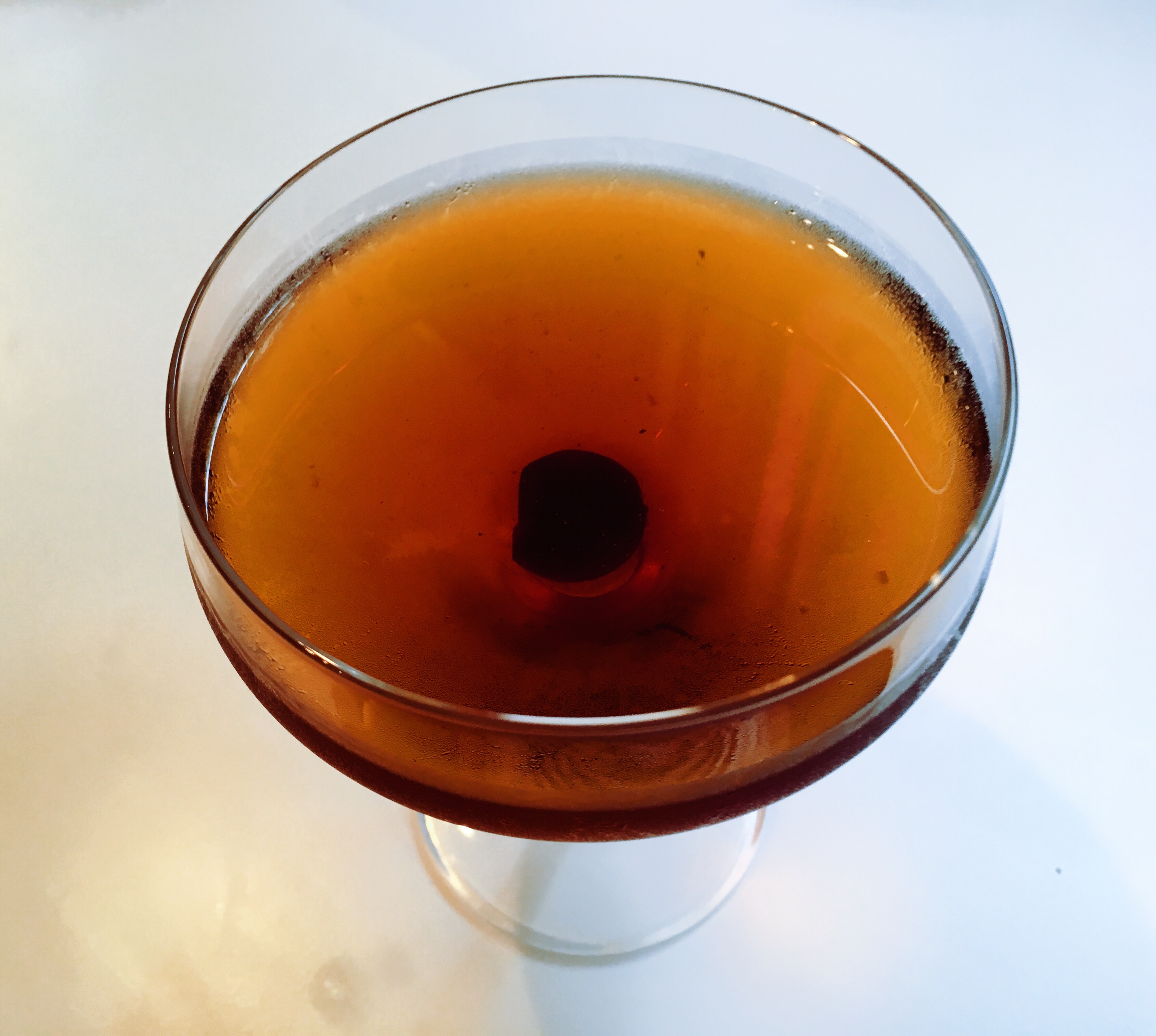 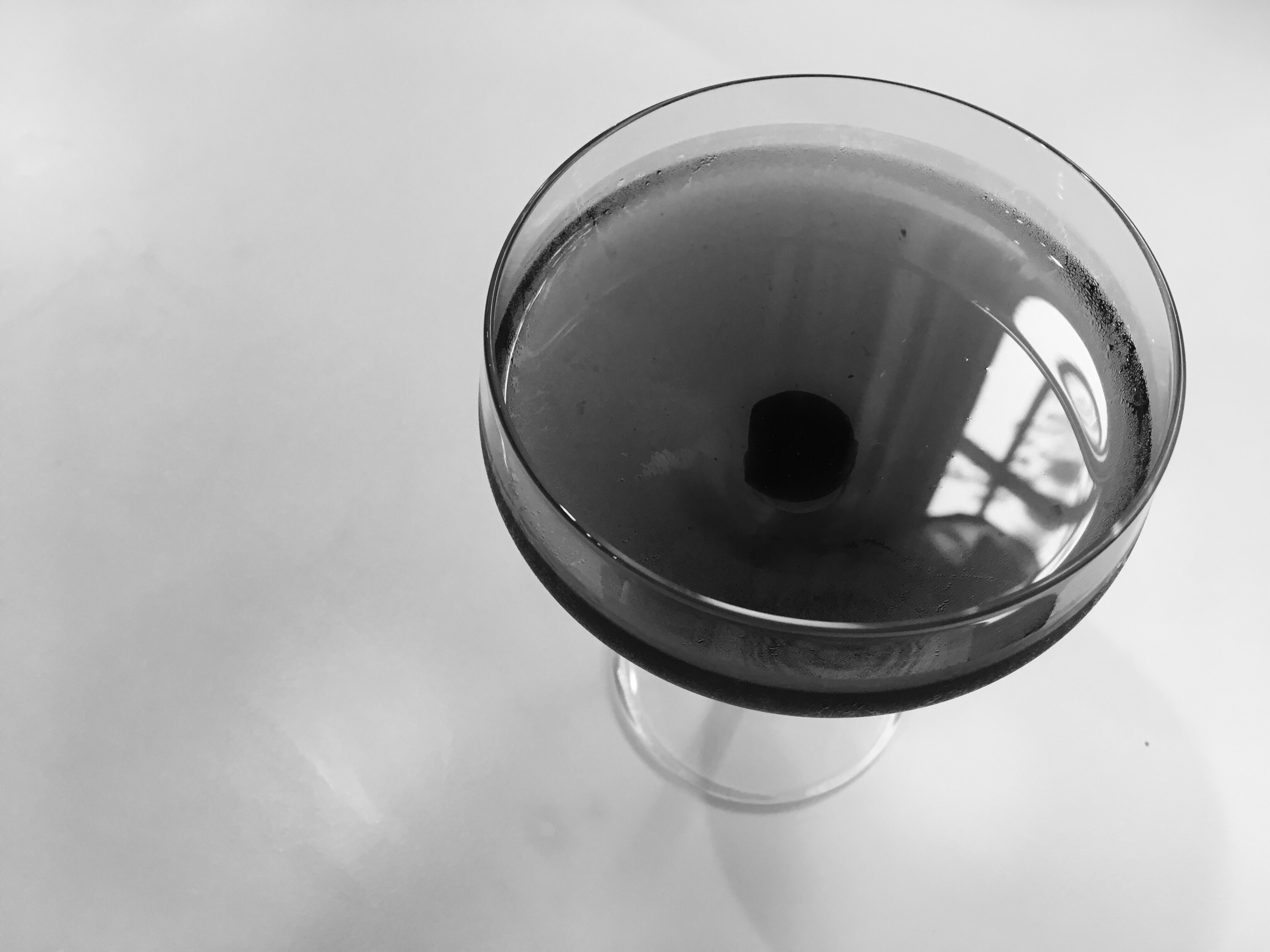 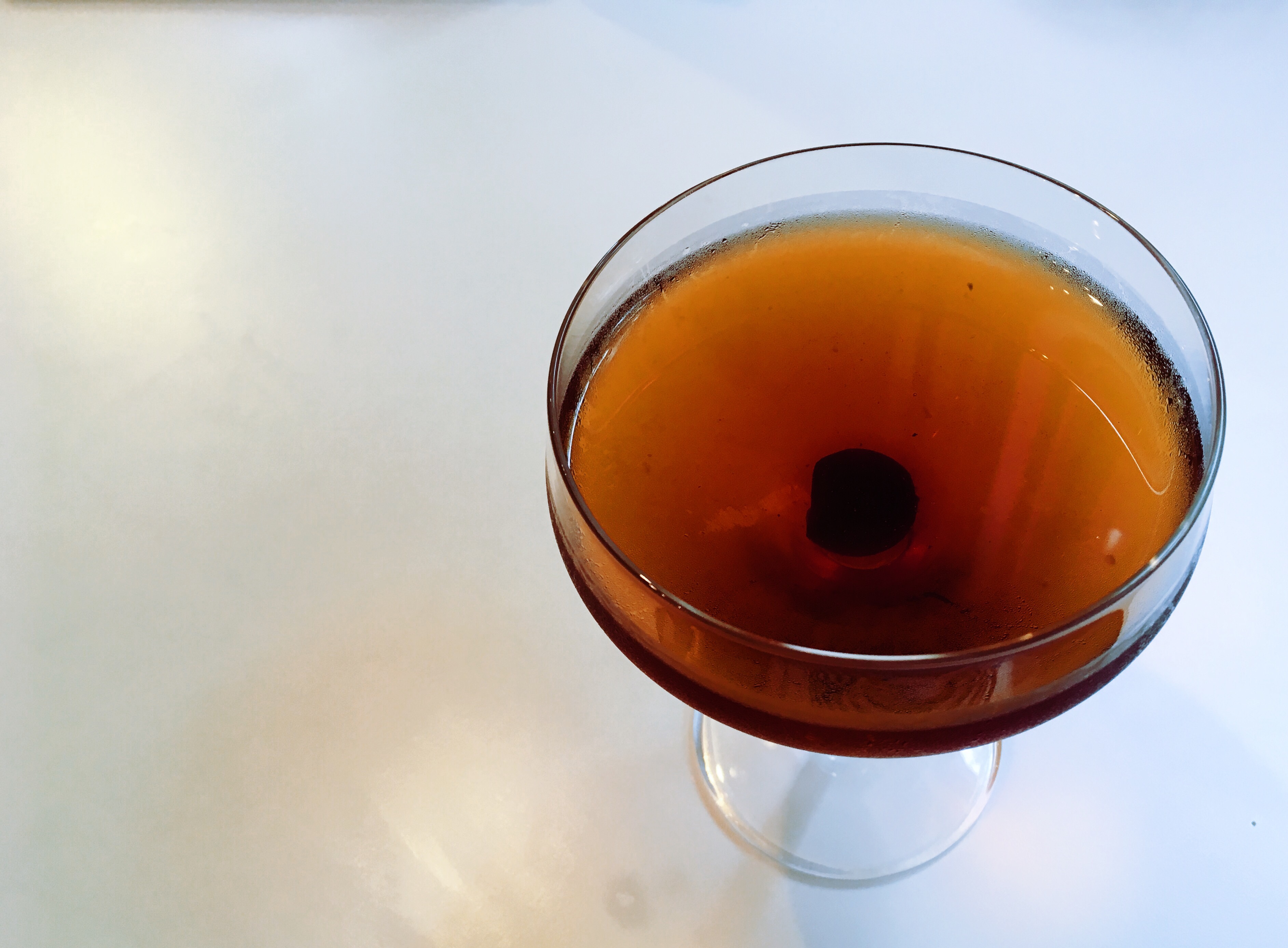