Well, we’ve finally worked through the bottles of inexpensive red and white vermouth one way or another (Gallo has been a suitable cooking wine replacement). So, it’s time to move on to the next bracket, pricier whites. You can also skip to top shelf reds, and to the overall championships.

It should be noted that in talking about vermouth ‘expensive’ is a relative term. I didn’t spend over $20 on any of them. It is possible to buy  more expensive ‘vermouth’–a new breed of American producers is happy to charge you $40 or so per bottle–but I decided to exclude these high-priced new kids on the block. As the quotation marks probably indicate, these aren’t exactly vermouths by the classic standards. American standards for what counts as Vermouth are more lax than European ones, basically coming down to, ‘Does it smell and taste kind of vermouthy?’ While I don’t mind a bit of an experimental spirit, I think if you’re going to use a name that already exists, you should fit the qualifications of the name. I’d be more amenable to these American liqueurs if they simply called themselves ‘aromatic aperitifs‘ rather than confusing things by appropriating the label ‘vermouth.’ Also, I think you should have to prove your mettle a little before doubling or quadrupling the price point. If these American ‘vermouths’ still exist ten years from now, maybe I’ll add a bracket for them, at whatever price they’re selling at by then. In the meantime, I’ve stuck with the classic vermouths, produced in their native land, the borderland between France’s Savoy and Italy’s Piedmont. 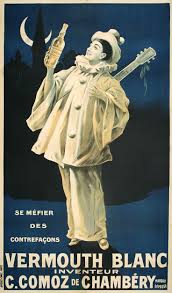 Actually, that’s not entirely true, because while I’ll excluded the American pseudo-vermouths, I did allow for one French and one Italian aromatized wine that aren’t vermouths and don’t call themselves ‘vermouth.’ These are quinquinas. They are made by the same process as vermouth, and play the same role in cocktails, but the cinchona root, rather than wormwood, is their defining ingredient. The only way to fill out the bracket was to include these quinquina cousins.

Having gotten that out of the way, let me introduce you to our contestants:

Dolin and Noilly Prat are the proper vermouths. The quinquinas are Cocchi Americano and Lillet Blanc (in the flask). I borrowed the flask worth of Lillet from my friend Dan because I’d earlier done a Cocchi v. Lillet taste test and landed on Cocchi; so I didn’t want to put out the cash for a whole new bottle of Lillet when I knew it would be just for this taste-off. I should also note that Noilly Prat is actually the same price, at $11, as the winner of the Inexpensive White bracket, Boissiere. I thought it was a little unfair to make Noilly Prat punch above its weight, while letting Boissiere contend against cheaper competition. But a) I couldn’t find Carpano Bianco, which is the other vermouth I really wanted to try, b) I need a fourth contestant for this bracket, and c) I really wanted to add Noilly Prat into the competition. So, we’re calling Noilly Prat expensive for our purposes.

The first thing that stuck out  is that price does matter with dry vermouth–and that $10 seems to be the magic number. Whereas Boissiere was really the only one in the inexpensive bracket which we truly liked, in this bracket all four were quite enjoyable, both straight and in a cocktail. The Cocchi and the Lillet were sweeter and had more body, whereas the two vermouths were lighter, crisper, and drier. But all four were well worth drinking.

Curious how Boissiere compared to all four of this bracket’s offering, and not just the round’s winner, I decided spur of the moment to move immediately on to the championship. Here are the five drinks in my order of preference:

The Cocchi Americano took the prize because of its exceptional balance. It was sweet, and sour, and herbal in the right proportions, and it’s neither too light nor too heavy. Second place goes to last round’s winner, Boissiere; though it was a pretty tight race among all four of the non-Cocchi contestants, Boissiere gets a podium finish because of its high value for price. I plan on stocking both Cocchi and Boissiere in my bar, using Cocchi for a more luxurious flavor and for more vermouth-heavy recipes and keeping Boissiere on hand for workaday mixing purposes.