Tasting St. Raphael Quinquina + Rose is a Rose is a Raphael Cocktail Recipe 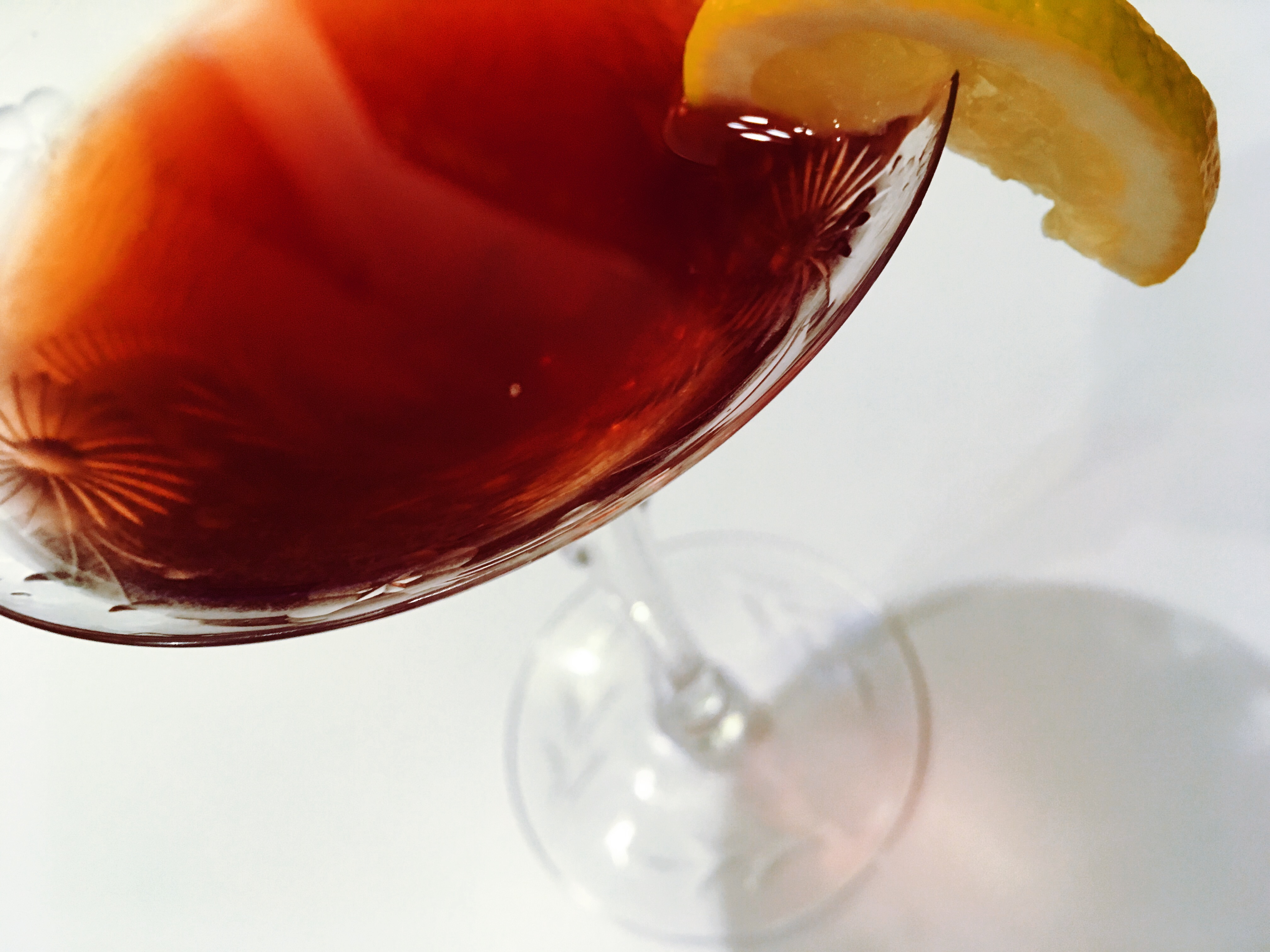 04 May Tasting St. Raphael Quinquina + Rose is a Rose is a Raphael Cocktail Recipe

A few days ago, we mentioned that Cocchi Americano is a quinquina, not a vermouth, and arguably therefore should never have been allowed in our Vermouth Taste-Off tournament. That might have left you with a couple of questions: ‘What exactly is the difference between a vermouth and a quinquina?’ And, ‘Why should I care?’ Well, it all comes down to whether you’re traveling to the tropics or you have a stomach ache.

Let me explain. The difference between vermouth and quinquina lies in the pharmaceutical roots (pun not intended but recognized and allowed to stand) of many of the alcoholic beverages we drink today. From the ancient period (maybe as far back as 1500 BC), through the High Middle Ages, and right up through the Colonial period, many liquors were created and consumed–at least partially–for medicinal purposes. Vermouth, for instance, in its earliest days was simply wine spiked with wormwood (‘wormwood’ is the English and ‘vermouth’ the French for the German vermut). The roots (see what I mean about the pun) and flowers of wormwood were used as a remedy for stomach ailments. Quinquina, on the other hand, was wine spiked with cinchona bark, which we know as quinine; quinine was an early anti-malarial treatment. So, historically speaking, the difference between a vermouth and a quinquina was something like the difference between Zantac and Doxycycline.

Gradually, we moved away from looking at vermouth and quinquinas primarily as medicine, first by recognizing that they weren’t only good for medicine, and secondly by finding more effective medicine. In both stages, taste began to take a more prominent role. More complex herbal mixtures began to be introduced into both drinks. Then, the two drinks started borrowing ideas from one another. Then, even more experimentation with flavors was undertaken. As of today, a vermouth might only contain a very small amount of wormwood, and could conceivably also contain some cinchona–but a cinchona doesn’t contain wormwood. The difference between the two categories is now basically technical: in Europe, to be classified as a vermouth, you must contain at least a little wormwood. Since Cocchi doesn’t, it’s a quinquina. This small and rather wonky remaining distinction between the two is why, in our re-run of the tournament, while we felt it important to make Cocchi Americano face other sweet, white fortified wines, we didn’t find it all that important to differentiate between vermouths and quinquinas.

The latest batch of samples we received from our friends at Fasel Shenstone, along with several vermouths we’ve already mentioned,  contained a couple of quinquinas as well. They, in fact, are claimed to be the very first quinquinas ever made, in 1830. According to the legend, Dr. Juppet worked so long into the night on a quinine elixir that he could no longer see straight. He called upon the Archangel Raphael for help, regained his sight, and was able to complete his recipe for a quinine infused fortified wine. In gratitude, he named his elixir St. Raphael. 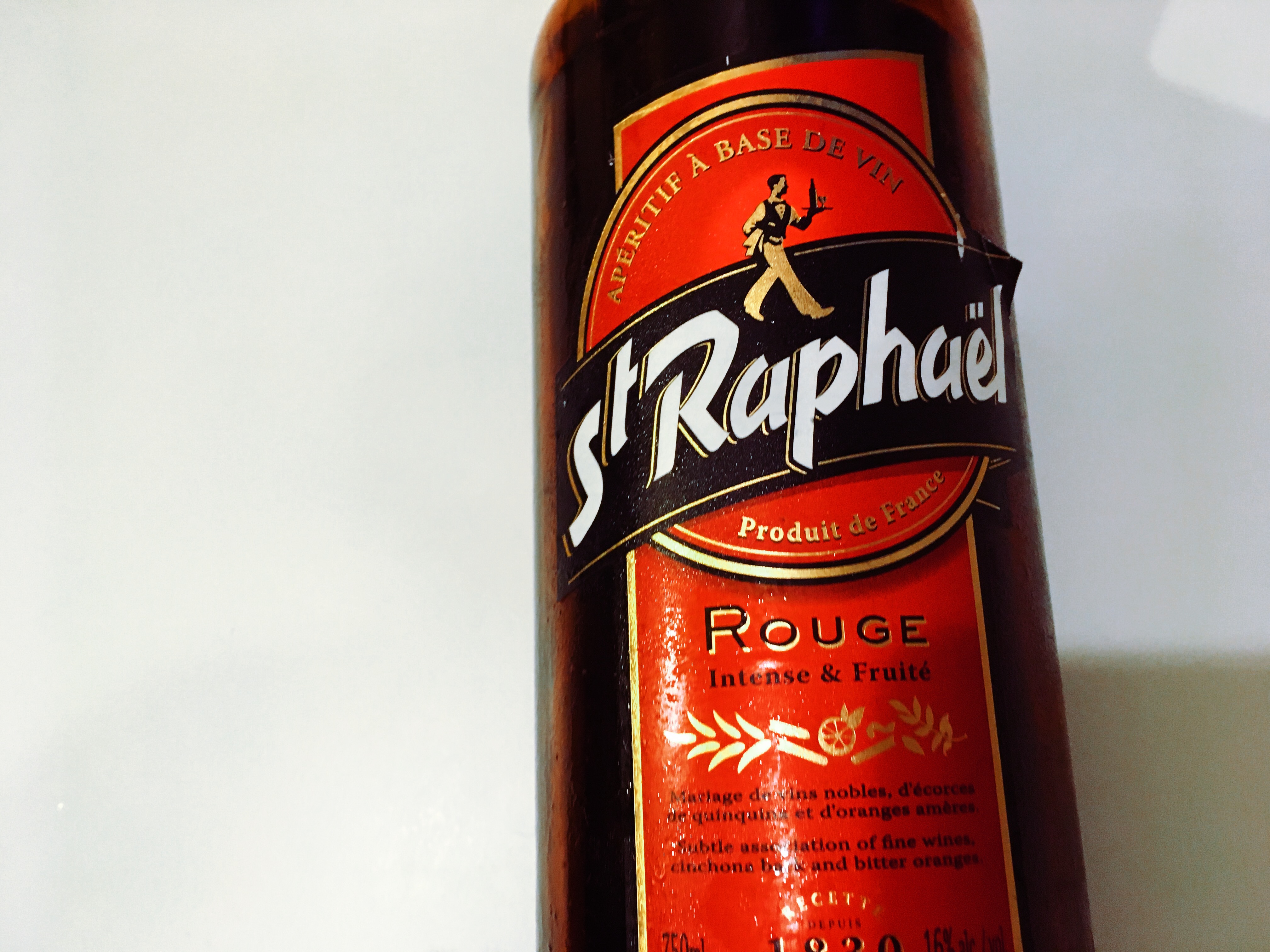 I’d normally be suspicious of a drink’s claims to divine origins, but I have to admit that St. Raphael does indeed taste heavenly. It comes in two varieties, a red and a gold. The red has a red wine base (more remarkable than you might think. Even red vermouths have a white wine base), well-balanced and deeply fruity. To that, they add quinine (of course), citrus peels for some bitterness, and brandy for a kick.  The result is a well-balanced, full-bodied but slightly sharp, utterly delightful drink. The gold uses a white wine base, and adds vanilla to the mix. It tastes like an extremely satisfying dessert, when you’re in the mood for something fruity and sweet but not too sweet.

We were inspired by Denson’s Rose is a Rose is a Rose. The ingredients (apart from the Lillet Rose to St. Raphael Rouge swap) are the same. The proportions are of our own making. 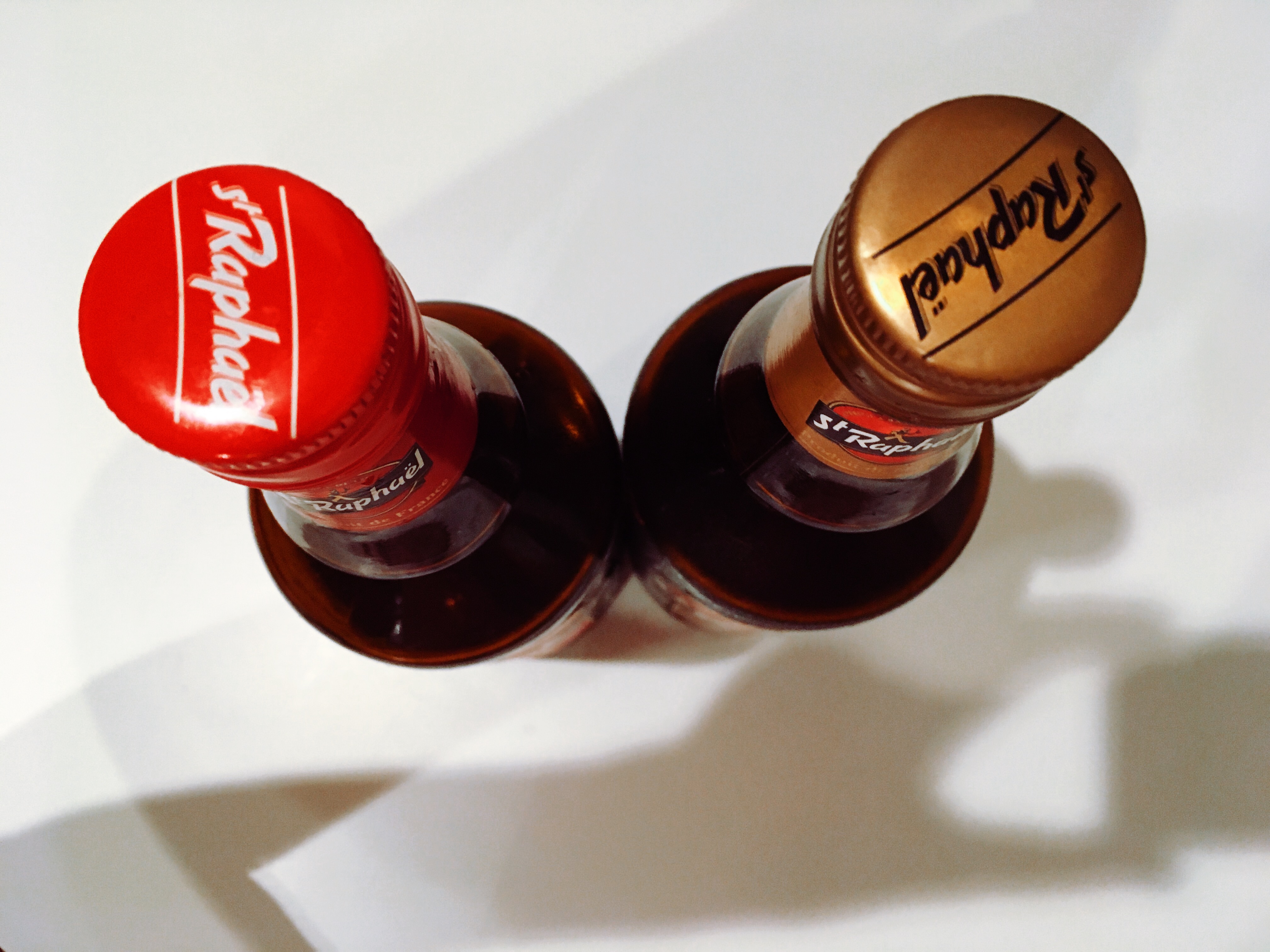 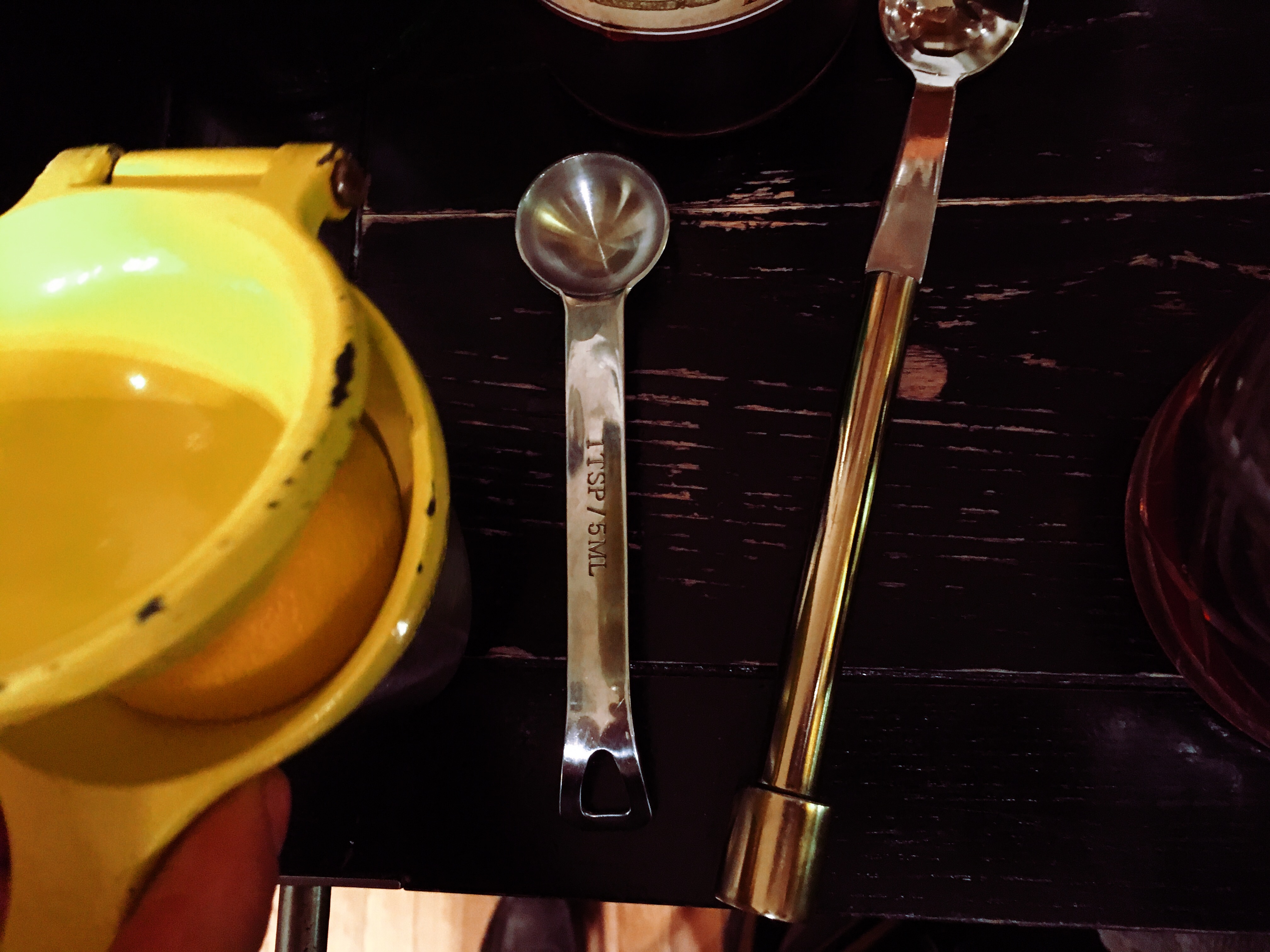 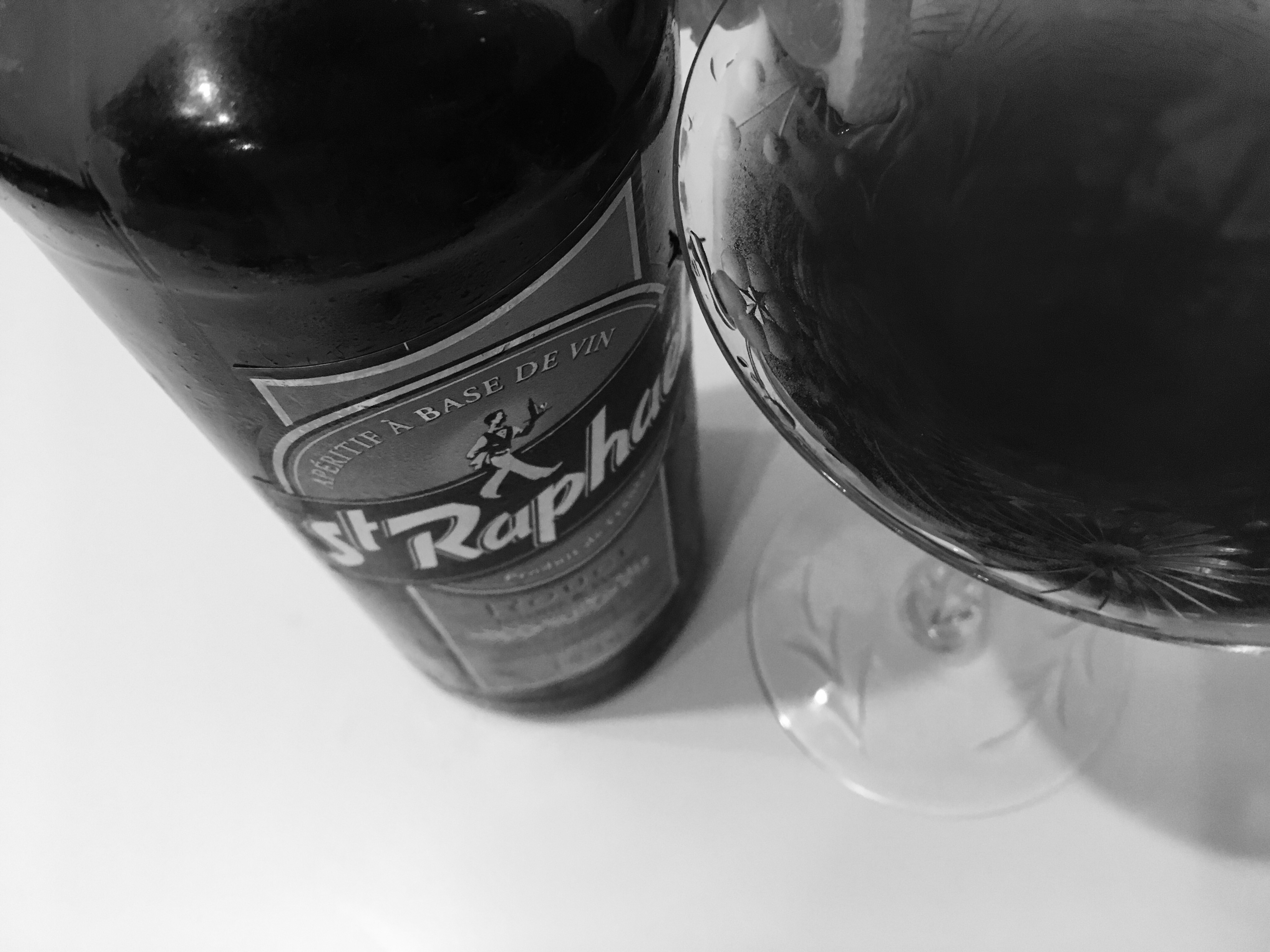 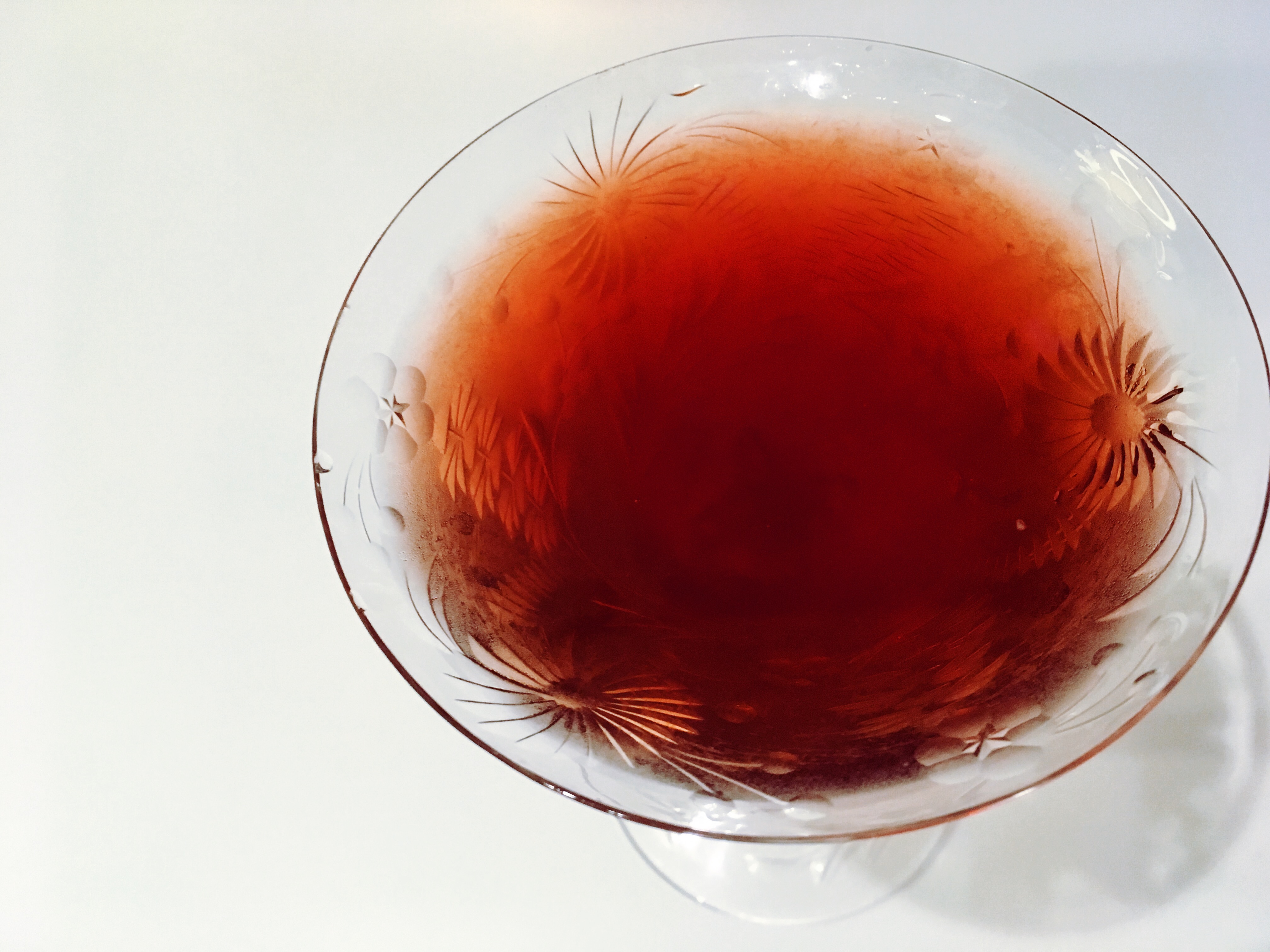 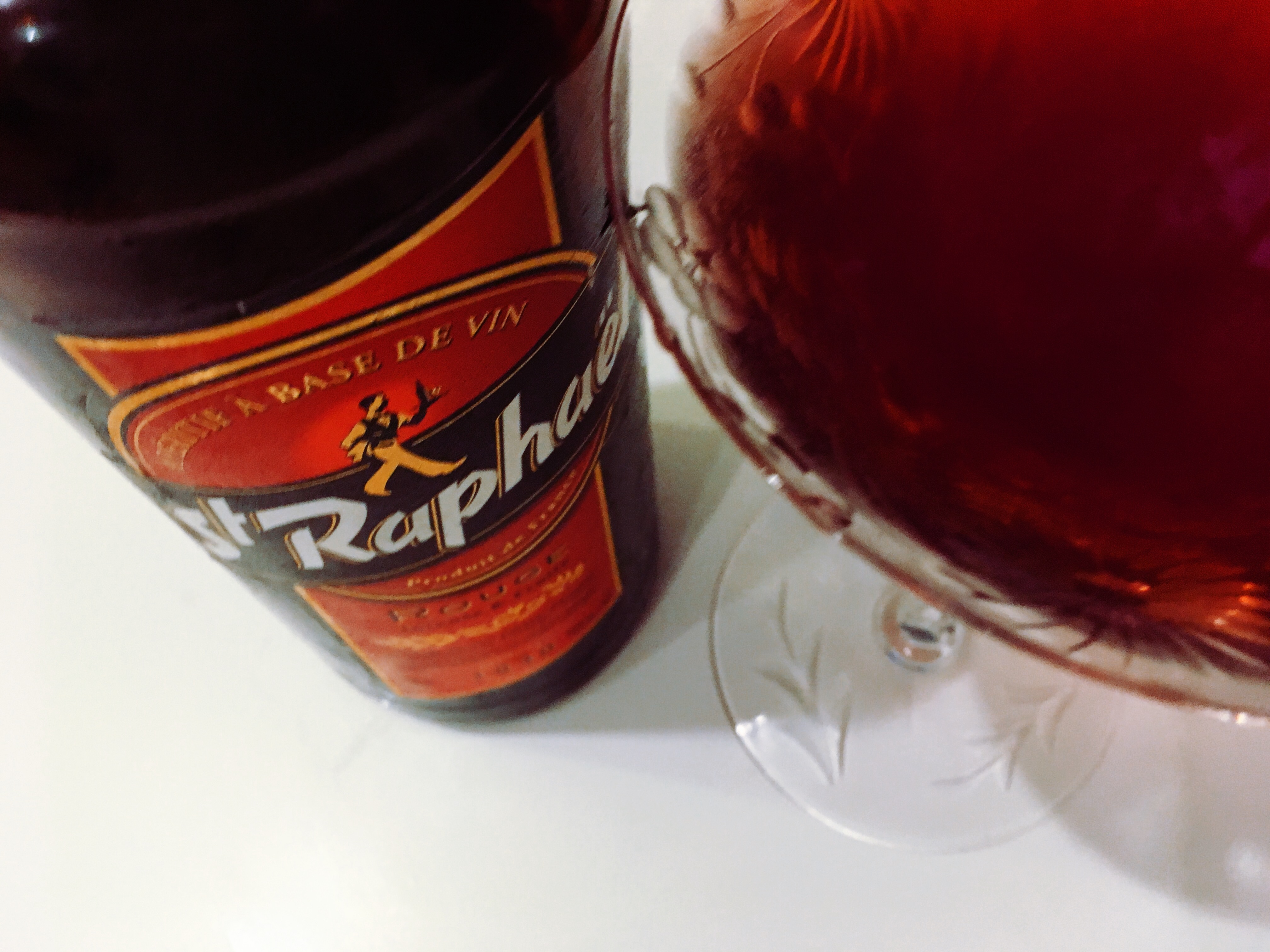