Drink of the Week: Pimm’s Cup

Meet Pimm’s Cup. It hails from the UK; so of course it’s okay to greet it with your best British-accent “hello mate.” Like a good Brit, Pimm’s Cup isn’t flashy or too self-involved; but it’s refreshing and versatile, and you’ll instantly love it’s sophistication.

I know we told you to make this delicious watermelon mint margarita for your Labor Day. And I certainly hope you listened to us. However, we were traveling several hours by car to crash at a friend’s place and thus weren’t certain our frozen watermelon would survive the journey. Also, there were an insane number of us all descending upon (read: crashing at) our one sweet friend’s home, and demanding a blender upon arrival just seemed a bit too much. That said, we also feel entirely inauthentic showing up at any party without a cocktail in hand. So, we needed a cocktail that could be made quickly, in mass quantity, be sophisticated, and yet be entirely accessible. Check, check, check, check. God Bless you, Pimm’s Cup.

We stayed with friends who serve in the military and live on a base. All weekend long, families took turns hosting bbqs and dinners and brunch, each family at least seeming perfectly happy that our friend brought us, 8 complete strangers, along with him. I was mesmerized by this warm community; it felt like family after family would merrily come and go, kids in tow. It was delightful and warm, and the type of community you dream of. It’s possible that this only happens on Labor Day, or that you can only get it as the result of constantly having significant others deployed overseas or picking up and getting stationed somewhere new, making you quickly bond with and rely on your neighbors.

In any case, it was beautiful, made me grateful for our country’s service people, and convinced me that military bases are the best–and that I, of course, could never live on one, not just because neither me nor my significant other are in the military, but also because I don’t have a six pack and that seemed like a clear requirement for every man, woman, and child that lived there. I’ve never felt so safe and simultaneously out of shape in my entire life. Even corn hole seemed challenging, in light of the finesse of the Navy Seals.

Almost all beverage consumption during the weekend happened in the form of beer by way of red solo cups, sometimes as the result of a game–I’m sure you can guess which ones. While it wasn’t really a cocktail weekend, still Pimm’s, like a good Brit, quietly made a way for itself. One of the many friends who had stopped by one of the weekend’s gatherings (we’ll call him Fighter Pilot A), noticed the bottle of Pimm’s in the fridge and said “Oooo, what’s that?” Yes, that is a direct quote.

We quickly made a Pimm’s Cup for him (Again, he’s a Fighter Pilot, which in my mind is the same as saying he IS Top Gun; so I probably would have made him 17 on the spot if requested) and suddenly others took note. “What’s that?” “I want one.” Soon Pimm’s was going round and my favorite of friends who, for the record, really doesn’t like cocktails, joyfully proclaimed, “This is the best thing ever!” Okay actually she said, “It’s just so refreshing! Effervescent!” But after repeating that 7 times, I felt confident in my interpretation.

So Pimm’s Cup. It’s the perfect late summer party drink. Or fall drink. Or spring drink. And, heck, I’m sure it would survive winter. It’s like the British Sangria and like sangria everyone loves it and it’s so pretty and it’s so easy. So go ahead, make some for yourself. 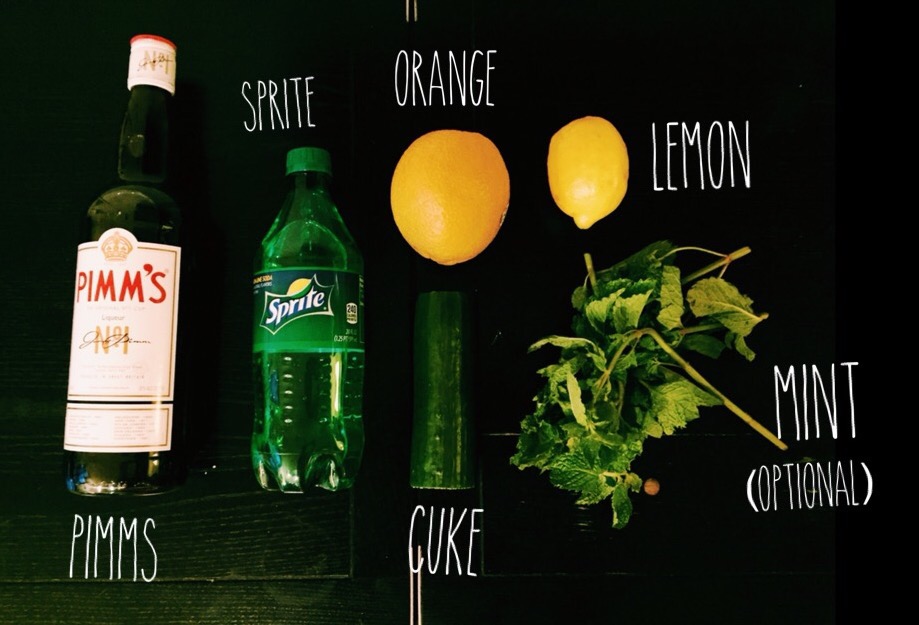 A note on the mint: Most Pimm’s recipes don’t call for mint, but one of the first we found did and we loved the addition. That said we’re a little mint-happy here. I have 2 very close friends who find mint less than grand. If you’re one of them, simply nix it. Or, just use some as a garnish in individual glasses as the pop of green adds a nice little touch. 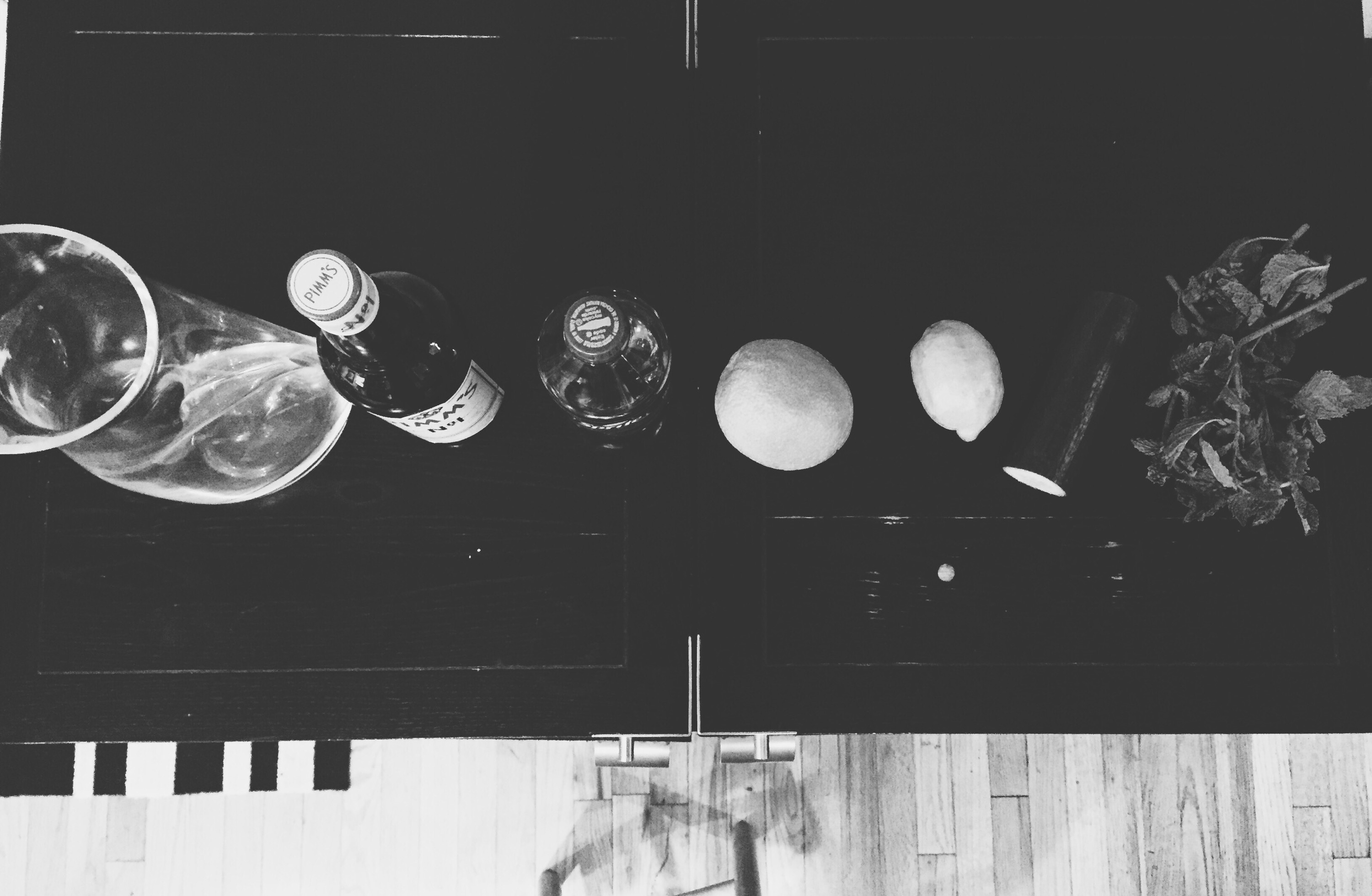 Step 1: Take out your favorite pitcher. If you’ll be serving straight from the pitcher than a clear glass one is best so that you can see the beautiful coloring of the ingredients. If you’re pitcher is durable enough to muddle in, use that. Otherwise find a large shaker.  Our pitcher is fragile and impossible to muddle in. 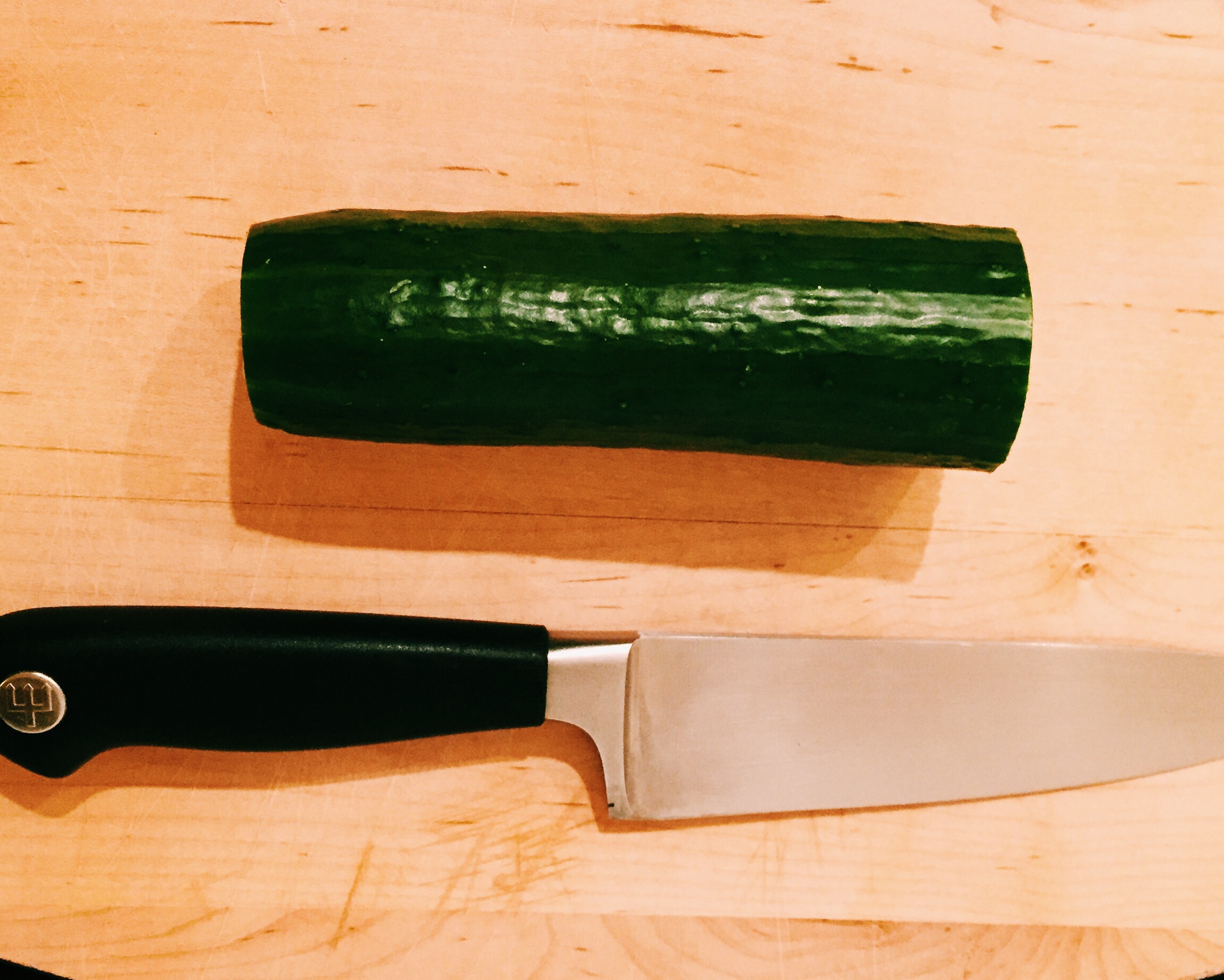 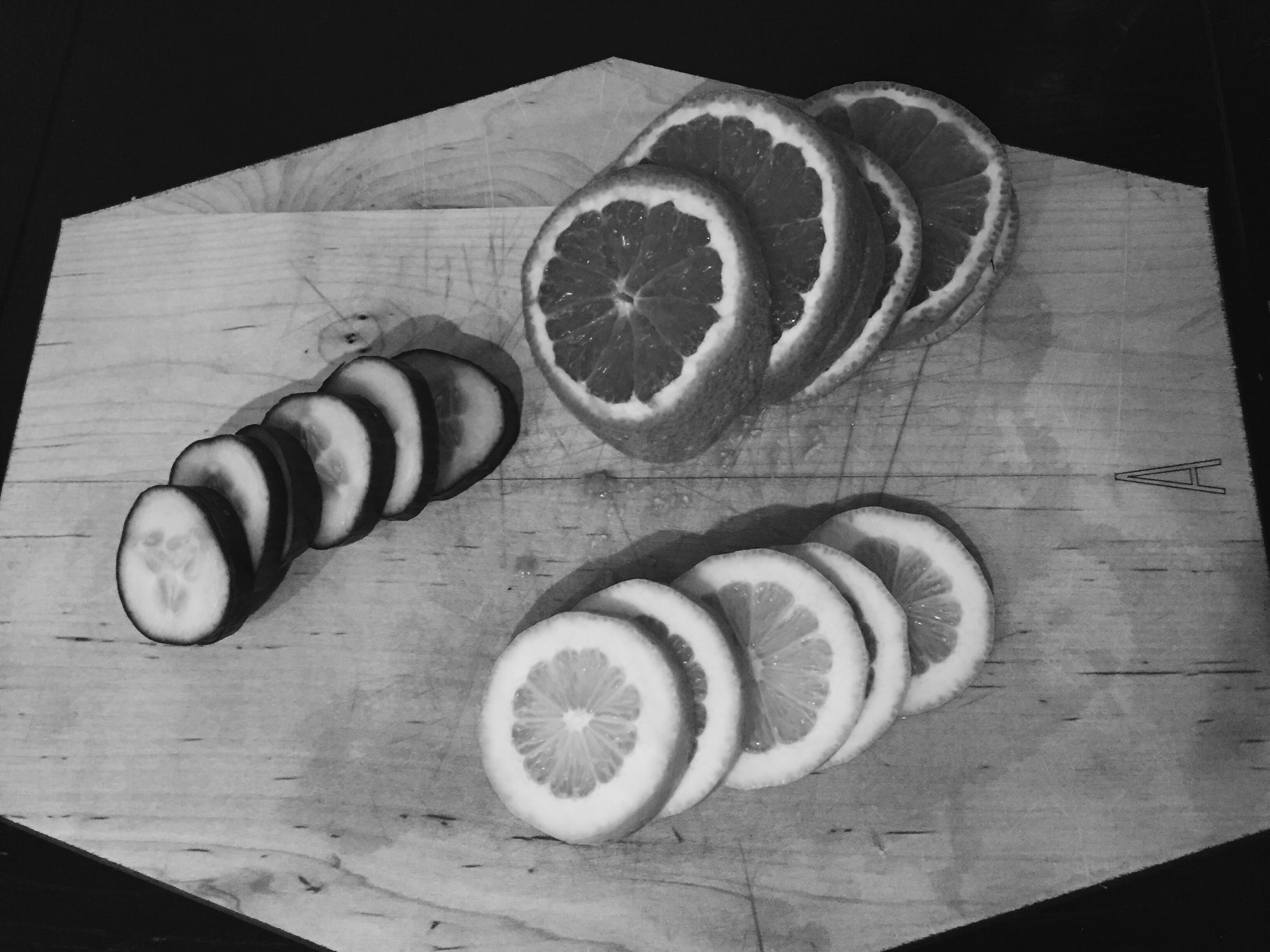 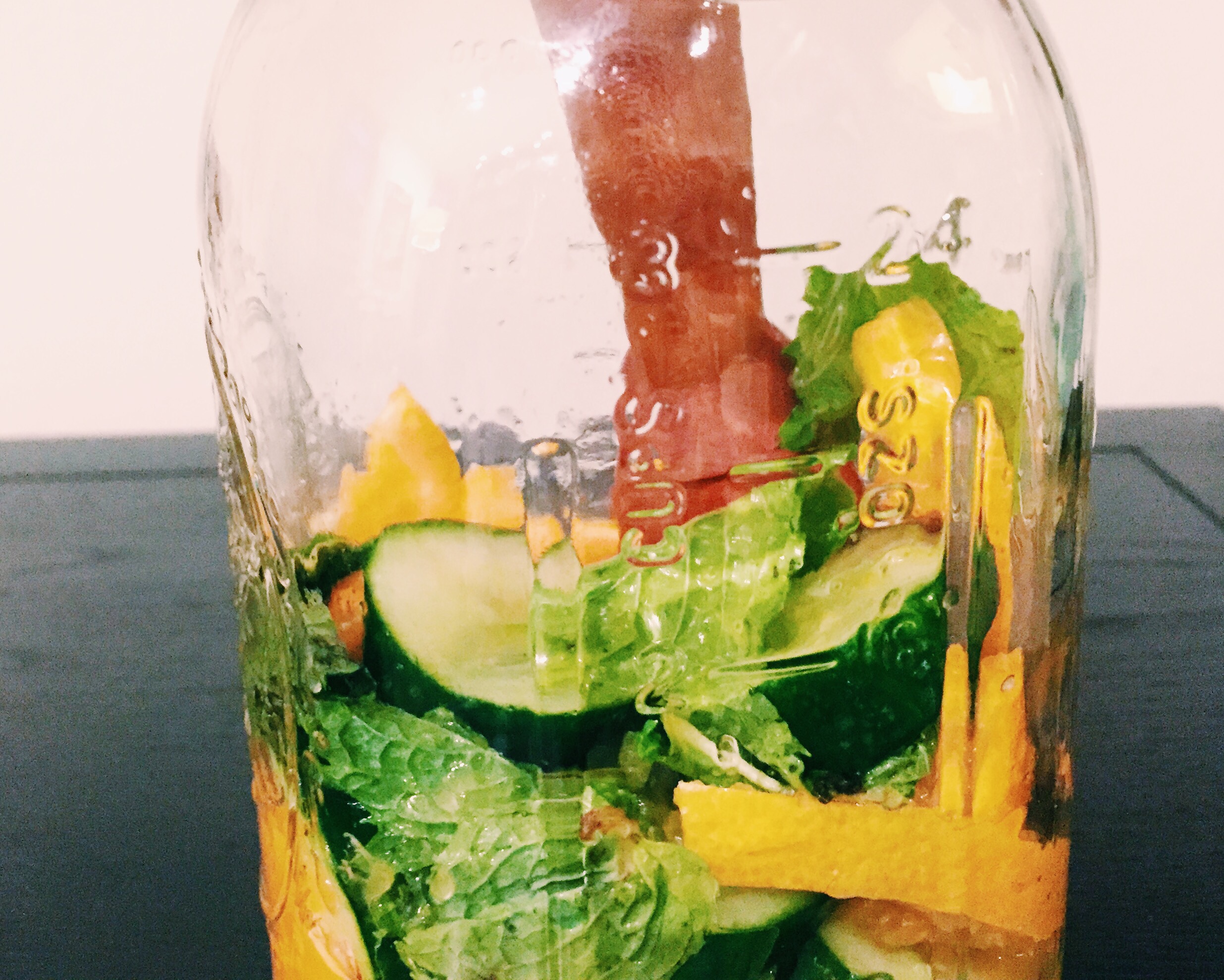 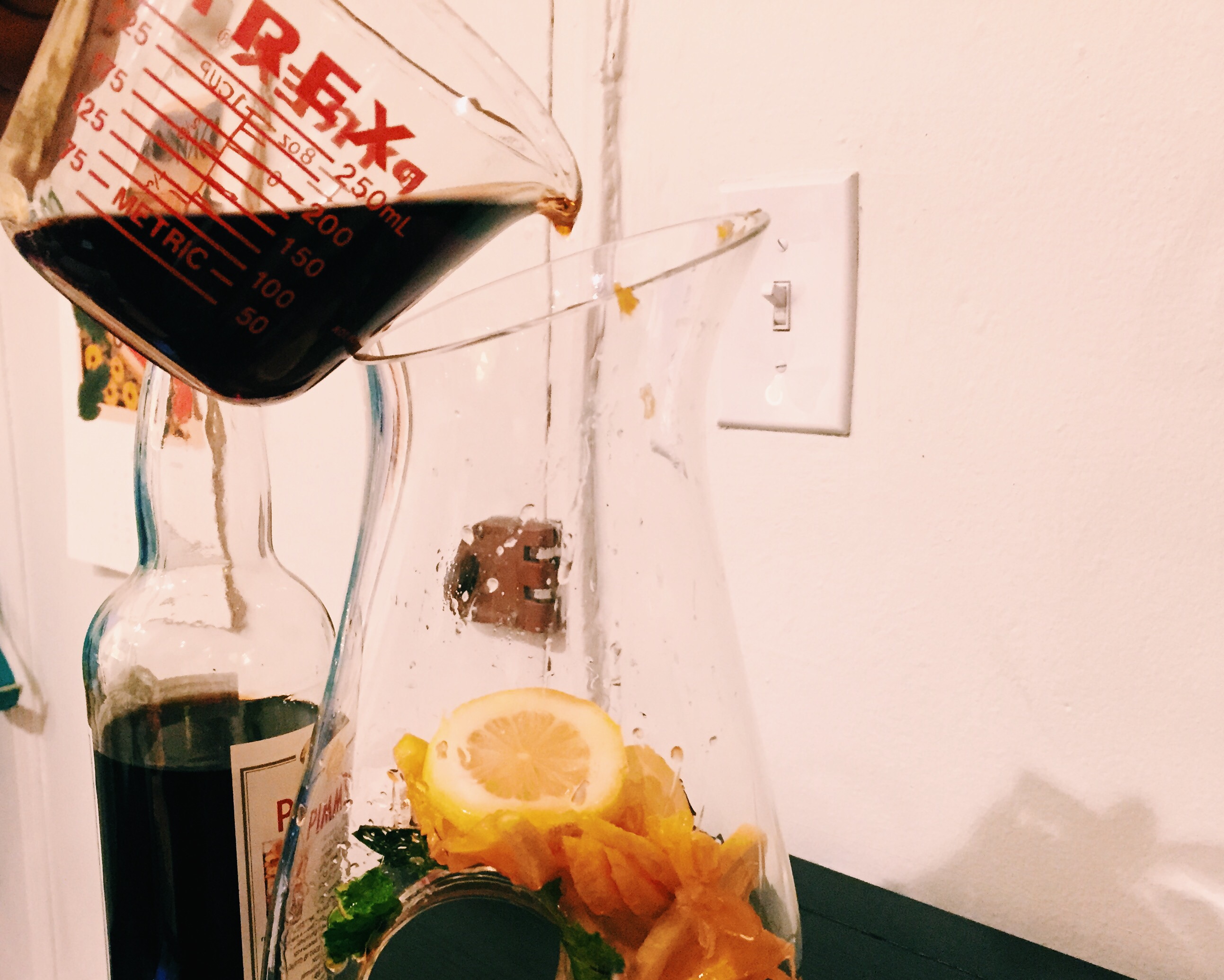 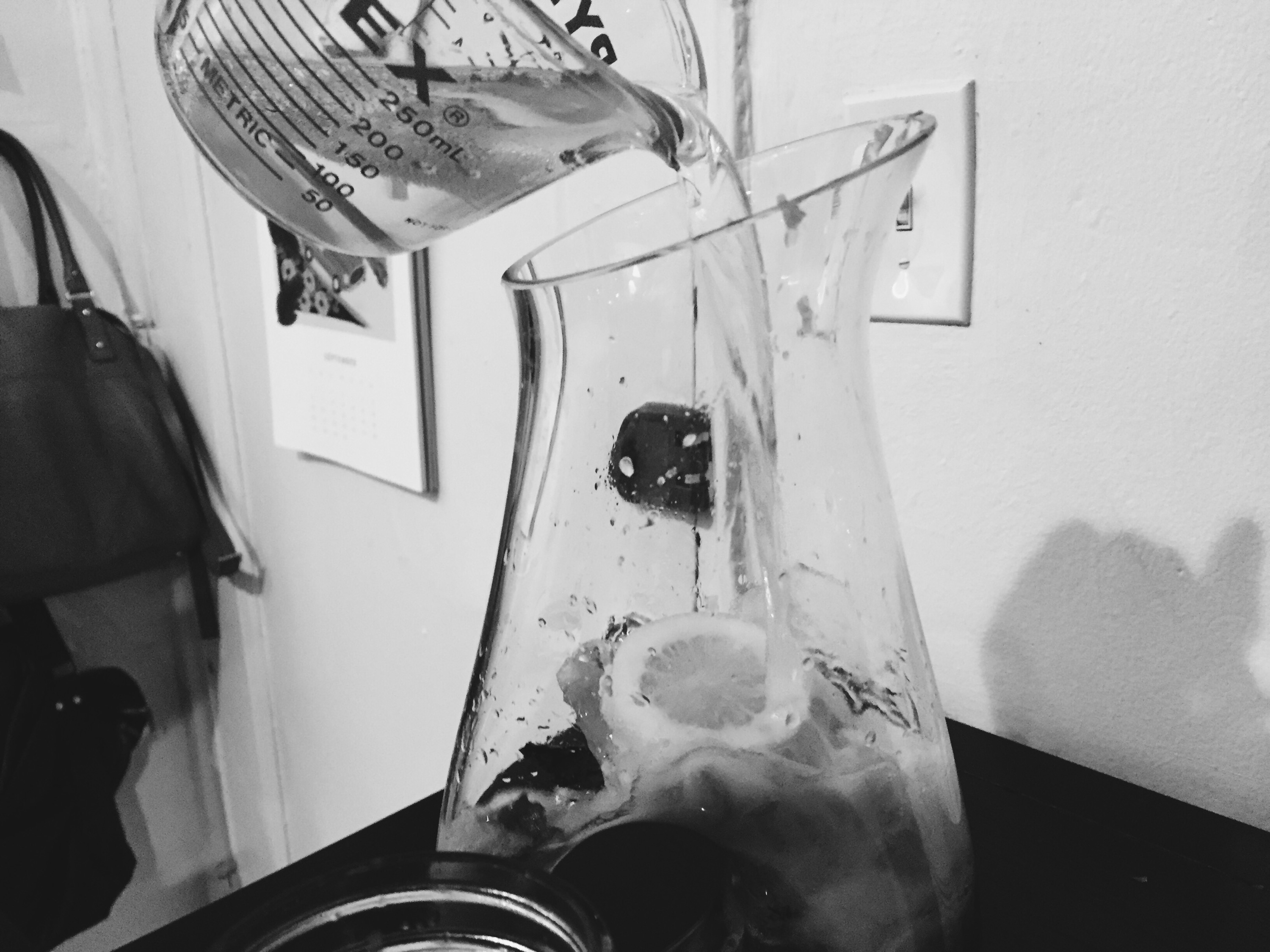 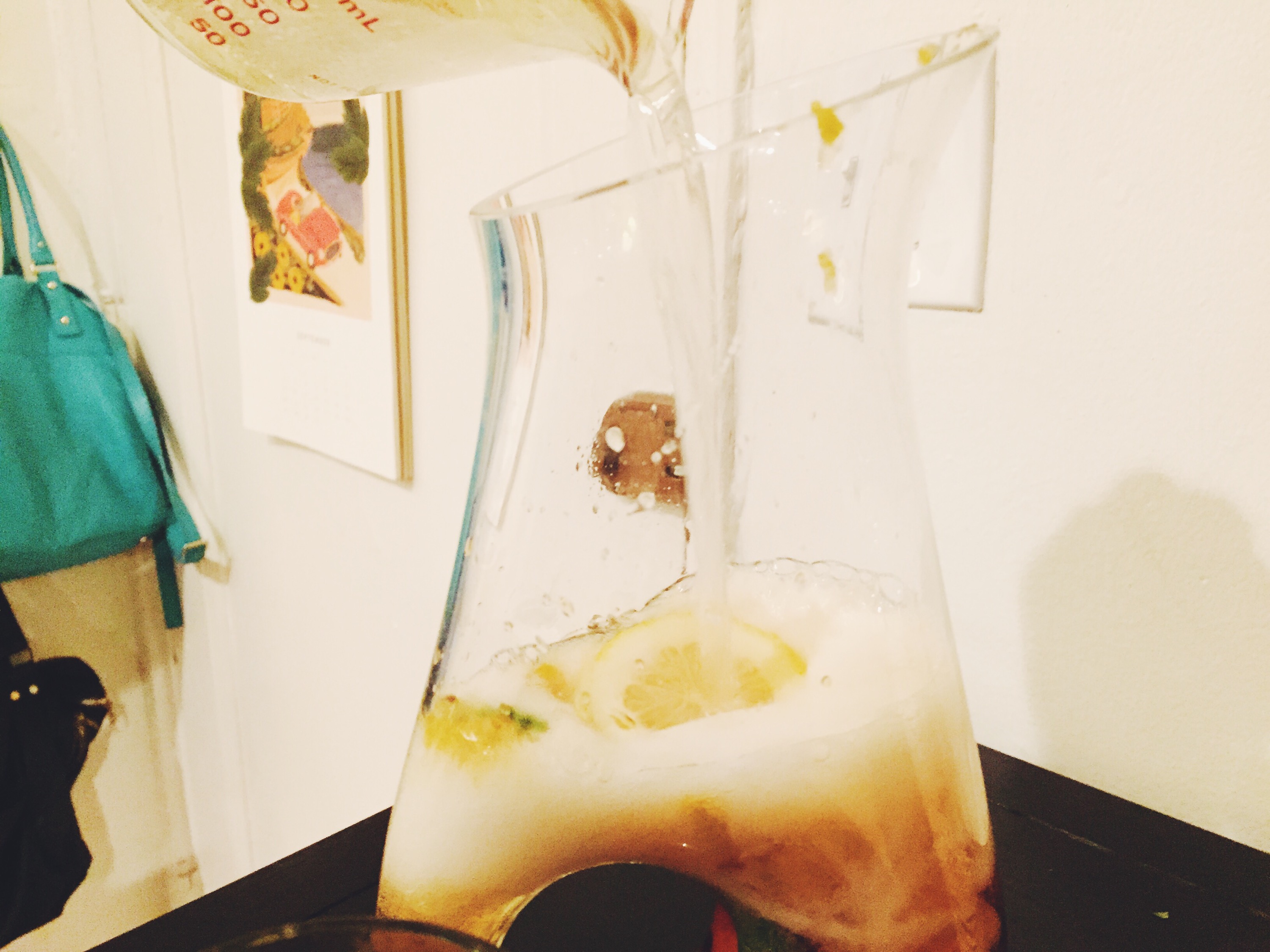 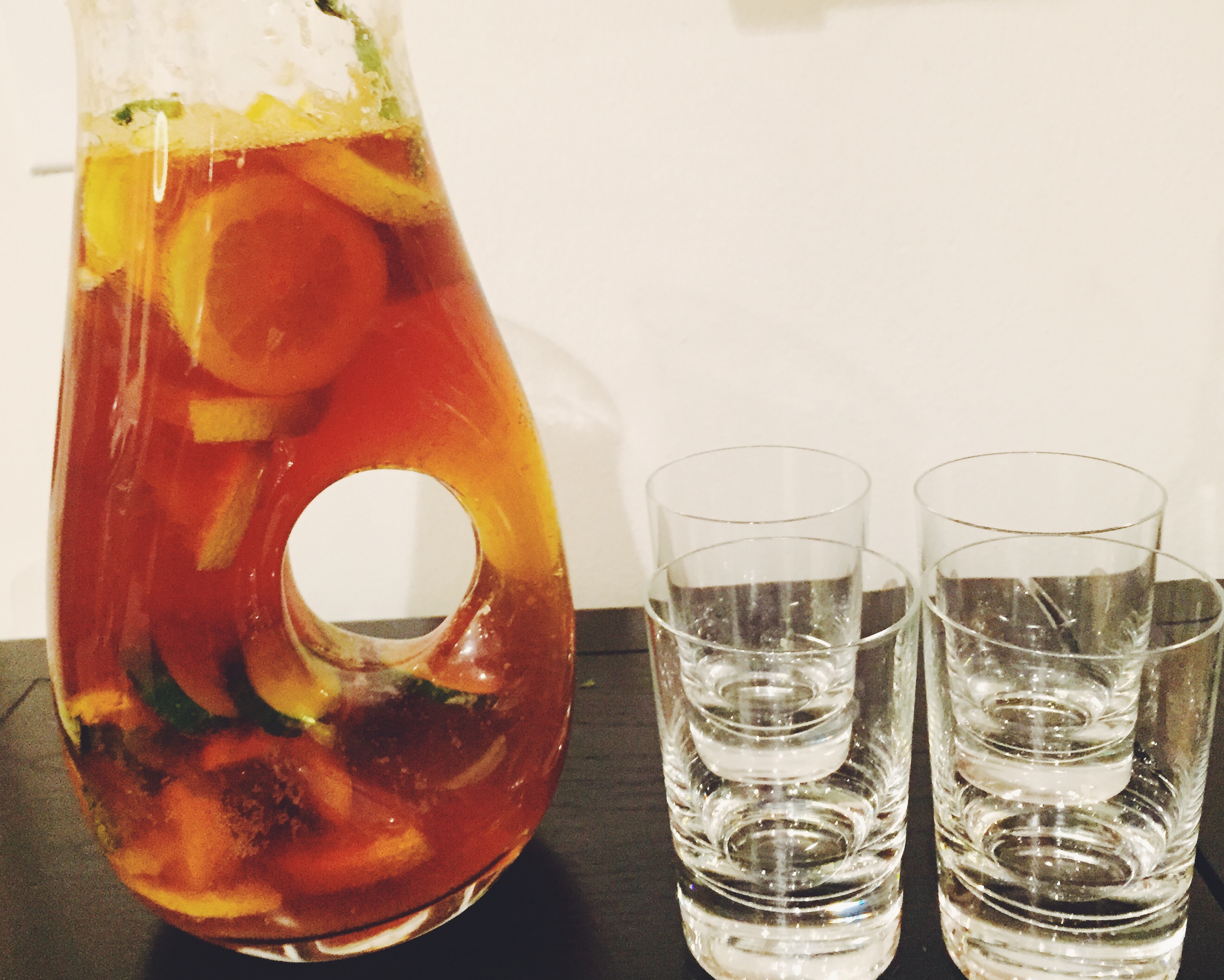 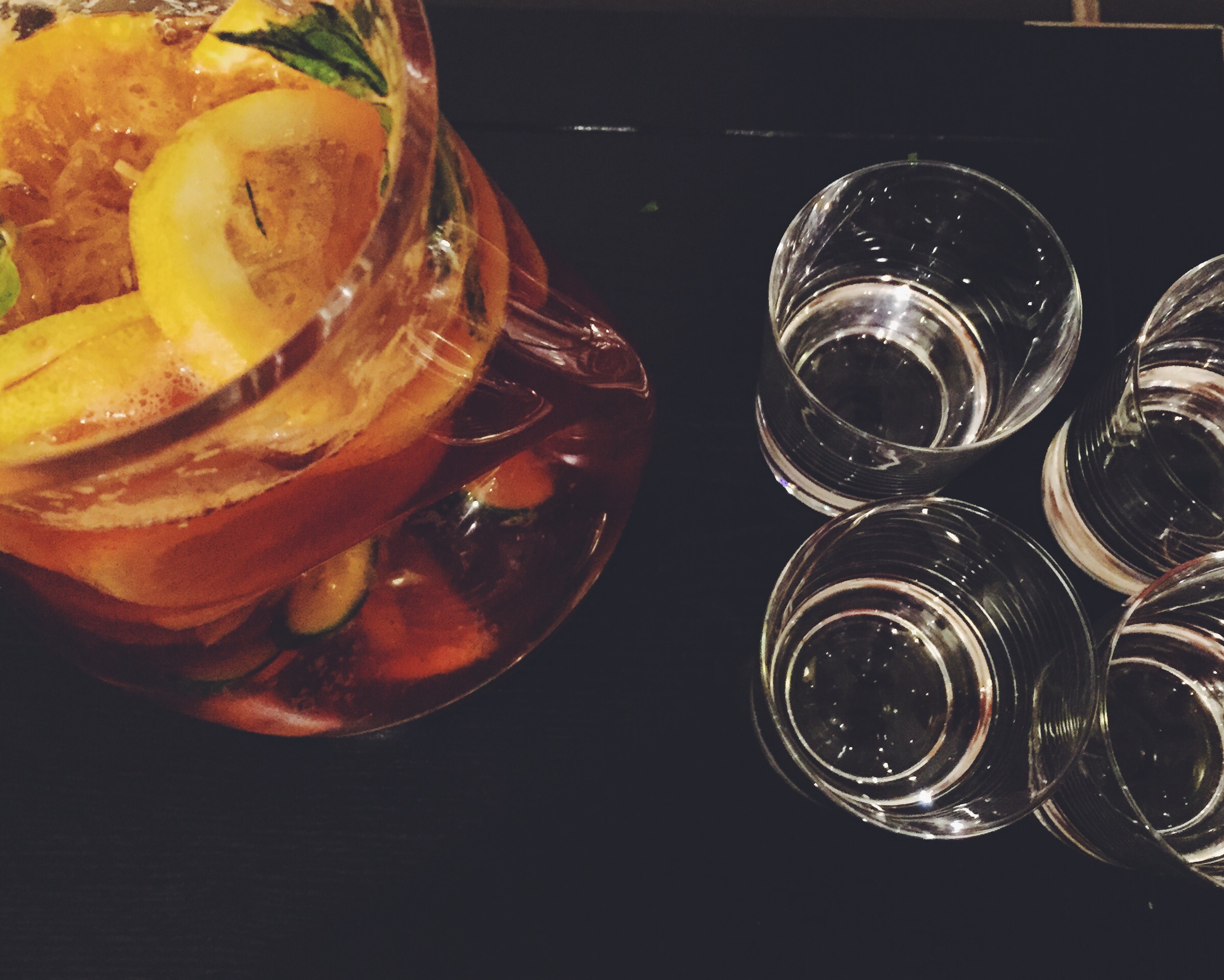 Step 6: Serve over ice. After pouring, use ladle to scoop a little bit of fruit into each glass.

The One Cup At a Time Version 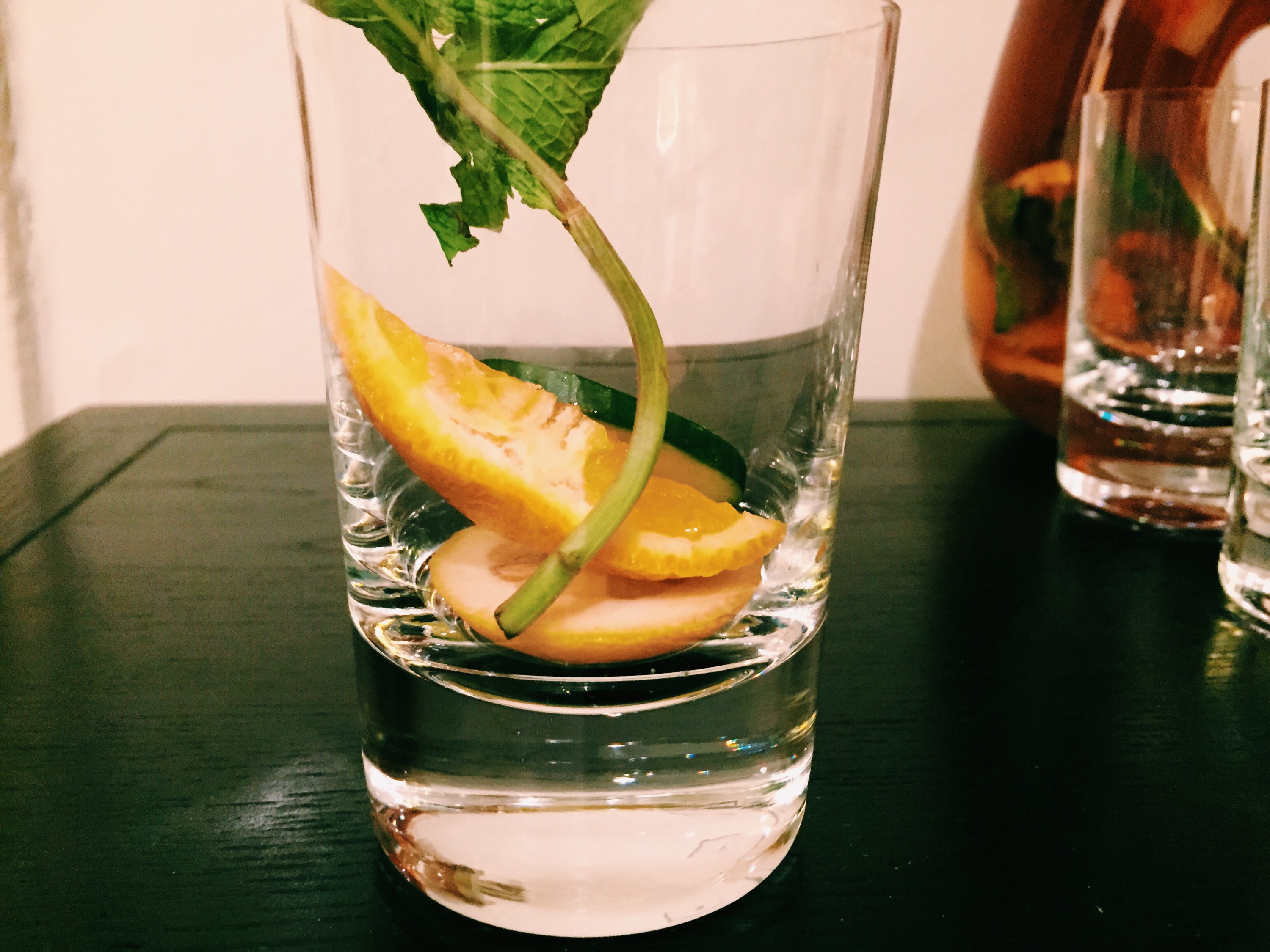 If you’re just having a couple of friends over, you can play bartender with this drink and make each drink to order.

Step 1: Slice orange, lemon, and cucumber ahead of time.

Step 2: In high or low ball glass put the fruit slices and mint  in the glass and muddle.