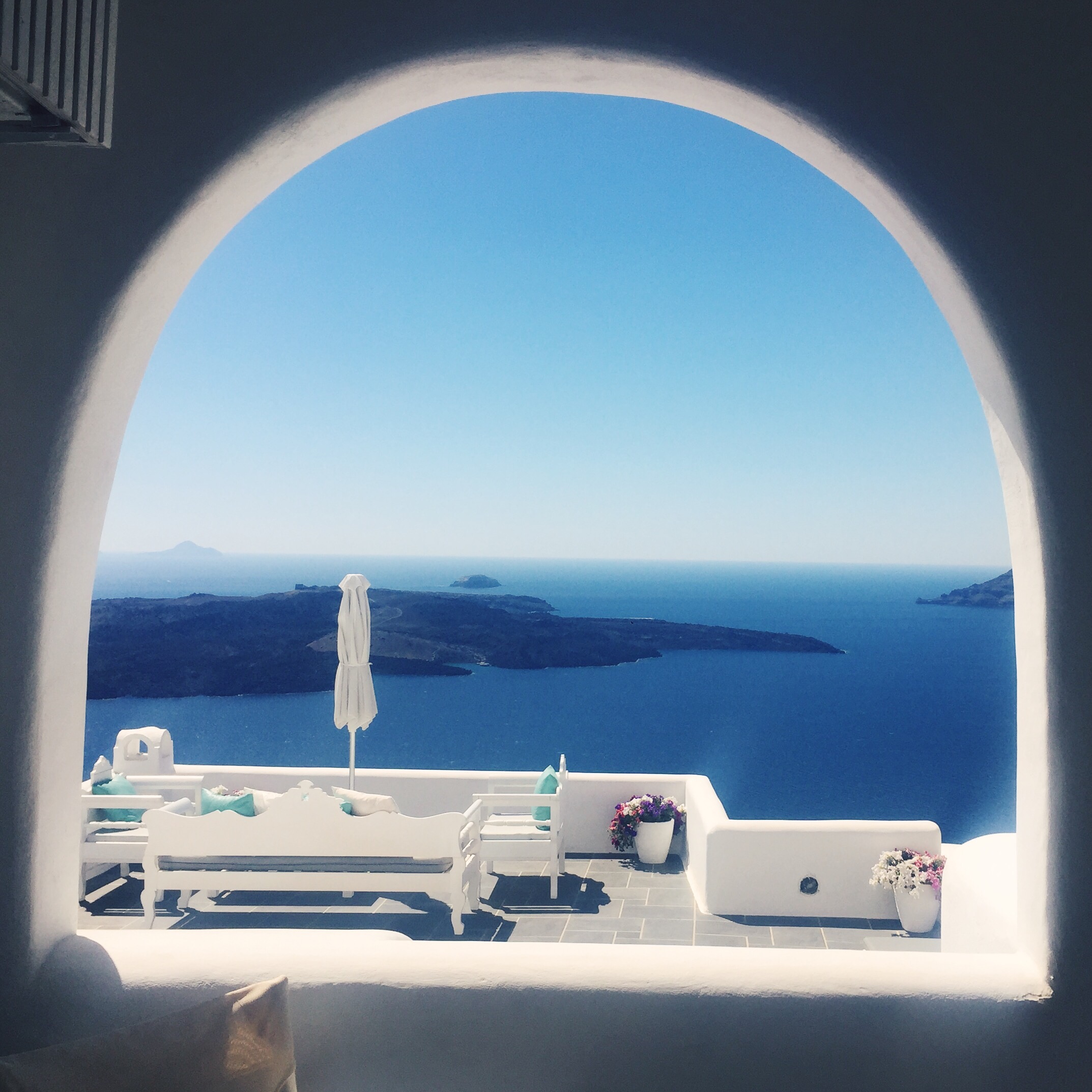 19 Sep Drink Like the Greeks: Introduction and Local Wine

While our love for our neighborhood of Eastern Market is well-documented, we also love to travel. We say we love to travel, but it might be more accurate to say we have loved to travel. We’re about to welcome a new member to the family, and that new member will have a vote on the topic of travel, perhaps–for a while at least–a deciding one. We’re going to do our best to coax the young ‘un to our way of thinking on the subject, but just in case they’re not persuaded, we thought we’d get one last big trip in before they arrive.

Our first port of call was Naxos, a Greek island about a six hour ferry ride from Athens. At one time, Naxos was quite a famous center of Greek civilization; that time was now about three thousand years ago, during the time of Homer. Nowadays, it’s not a terribly important place, but it’s an utterly charming one that seems to have a knack for convincing people who somehow find themselves there never to leave. If you’re looking for a quiet place to enjoy picturesque views, quaint villages, warm hospitality, and hearty, delicious food, we highly recommend it. If you go, this is what you’ll find.

There are two destinations in Naxos: the mountain and the beaches. The roads to both of them are one lane, winding tracks, just as likely to be dirt as paved. They might be one lane, but they’re two-way. And those small, one lane, two way roads carry all kinds of traffic: cars, pedestrians, countless motorbikes and ATVs, the occasional horse, and–last but certainly not least–buses. For some reason, the local buses on the little roads of the little island of Naxos are all huge, Greyhound-style touring buses. If you want some excitement, try driving through one of Naxos’ beach towns. As you swerve to avoid some pedestrian beach traffic, at the very same time a motorbike passes you, you’ll find yourself face to face with one of those massive buses going the opposite direction. All on a one lane, dirt road. In some miracle of time and space, it worked out just fine every single time; but every single time we held our breath, wondering if it would. 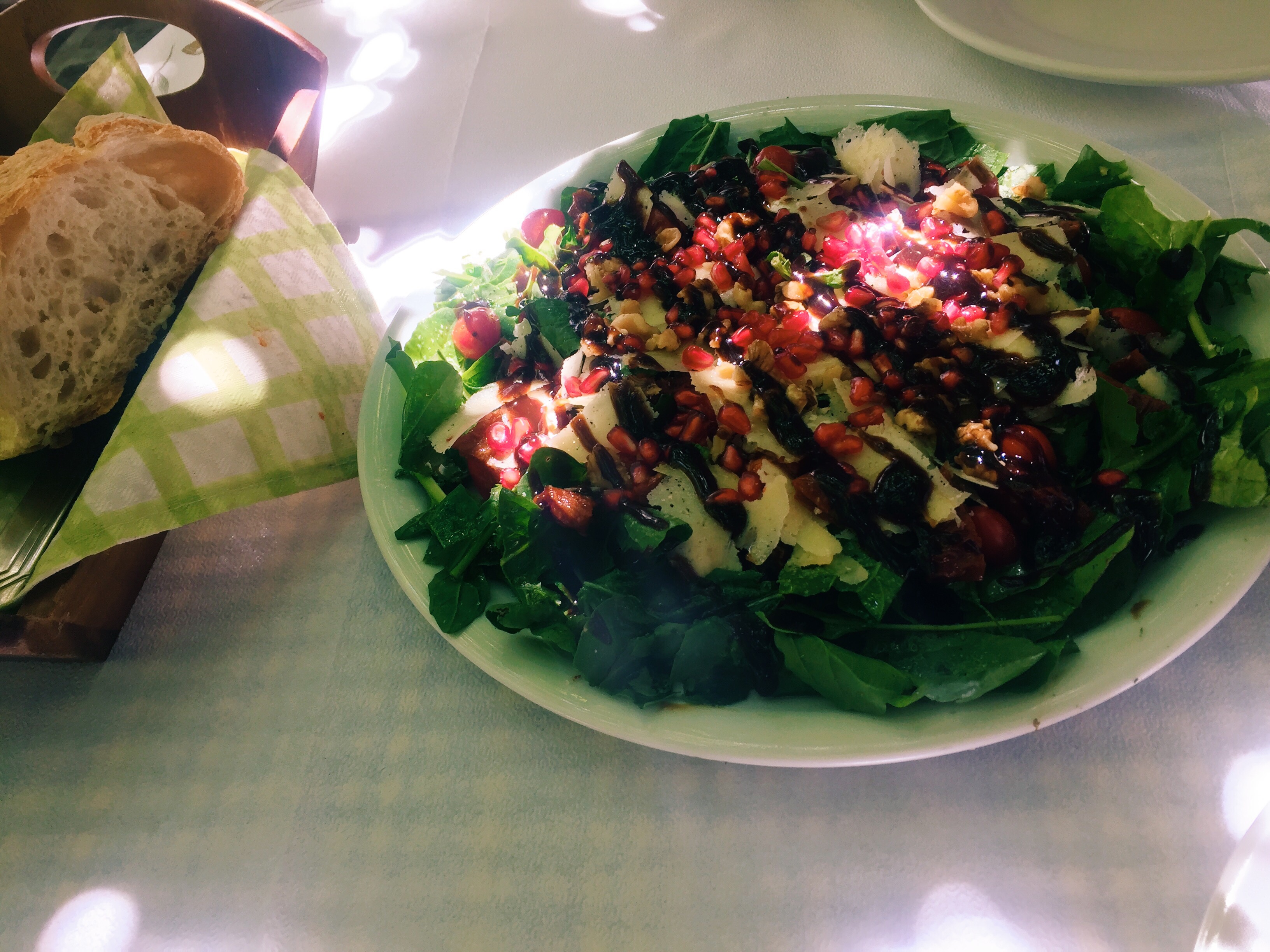 Build Up an Appetite

The food on Naxos is fresh, delicious, local, inexpensive, and plentiful. There were so many interesting dishes, we always found ourselves wanting to try a few. We were never sorry, but we were often quite full, as the portions were huge, even to an American eye. It took us awhile to learn that we really only needed one full meal a day. If you go, try absolutely anything in a tomato sauce over rice or noodles; the sauce was quite simple and disarmingly delicious. The food was made especially enjoyable by the fact that many of the restaurants were right on the beach. We’re not talking about near the beach, but actually on the beach. There’s nothing quite like eating an utterly satisfying meal with your feet in the sand. 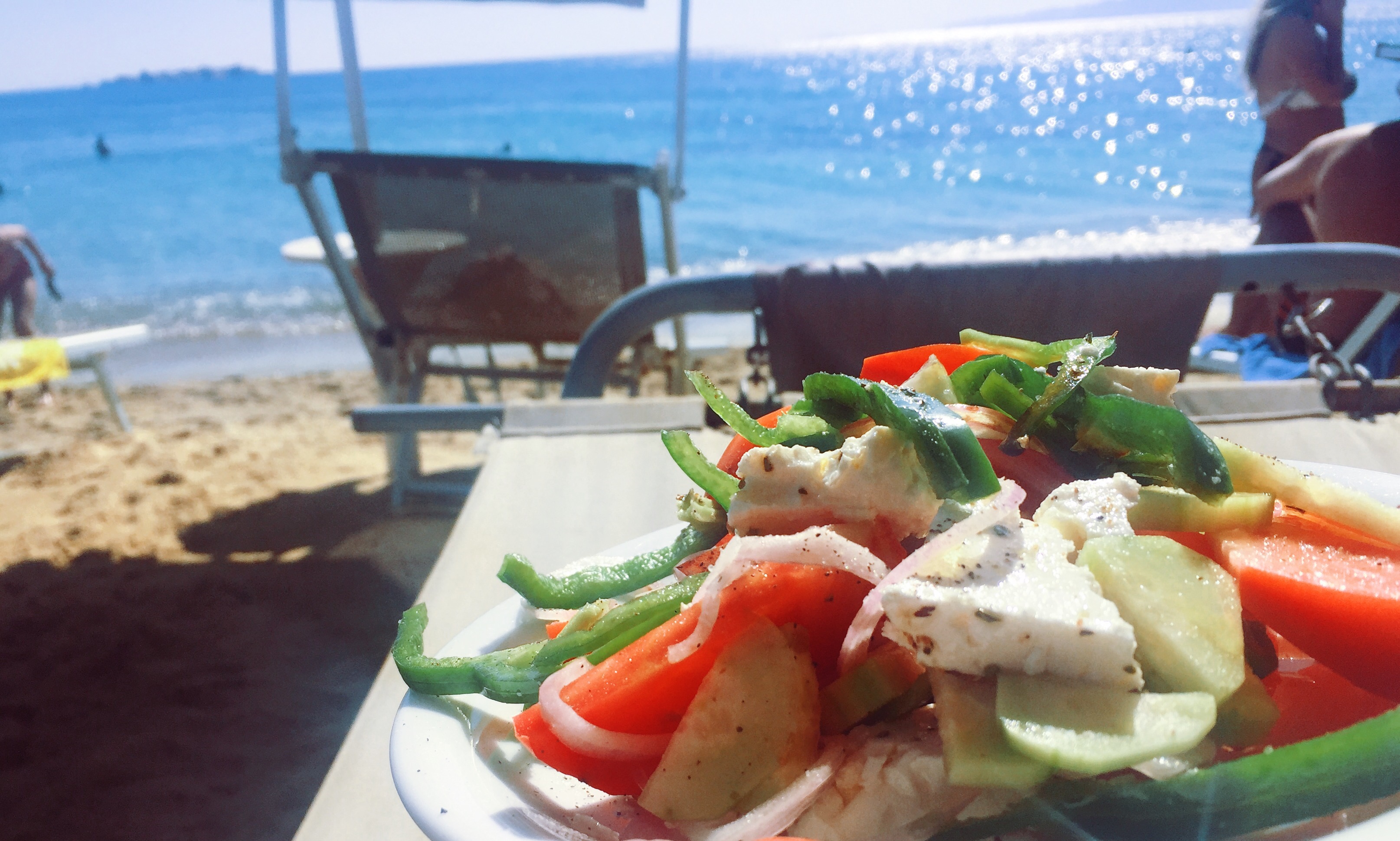 Beaches For Every Mood

The entire west coast of the island is beach. All of the beaches feature turquoise water, views of the picturesque island across the channel, and 75 degree weather. Closer to the main town, they’re hotel or restaurant beaches, where for the price of a soft drink or some wine (often cheaper than the soft drink), you can claim an umbrella and a lounge chair or hammock. A little crowded for your taste? That’s okay, just head a little south. The farther down you go, the bigger, quieter, and more natural the beach gets. 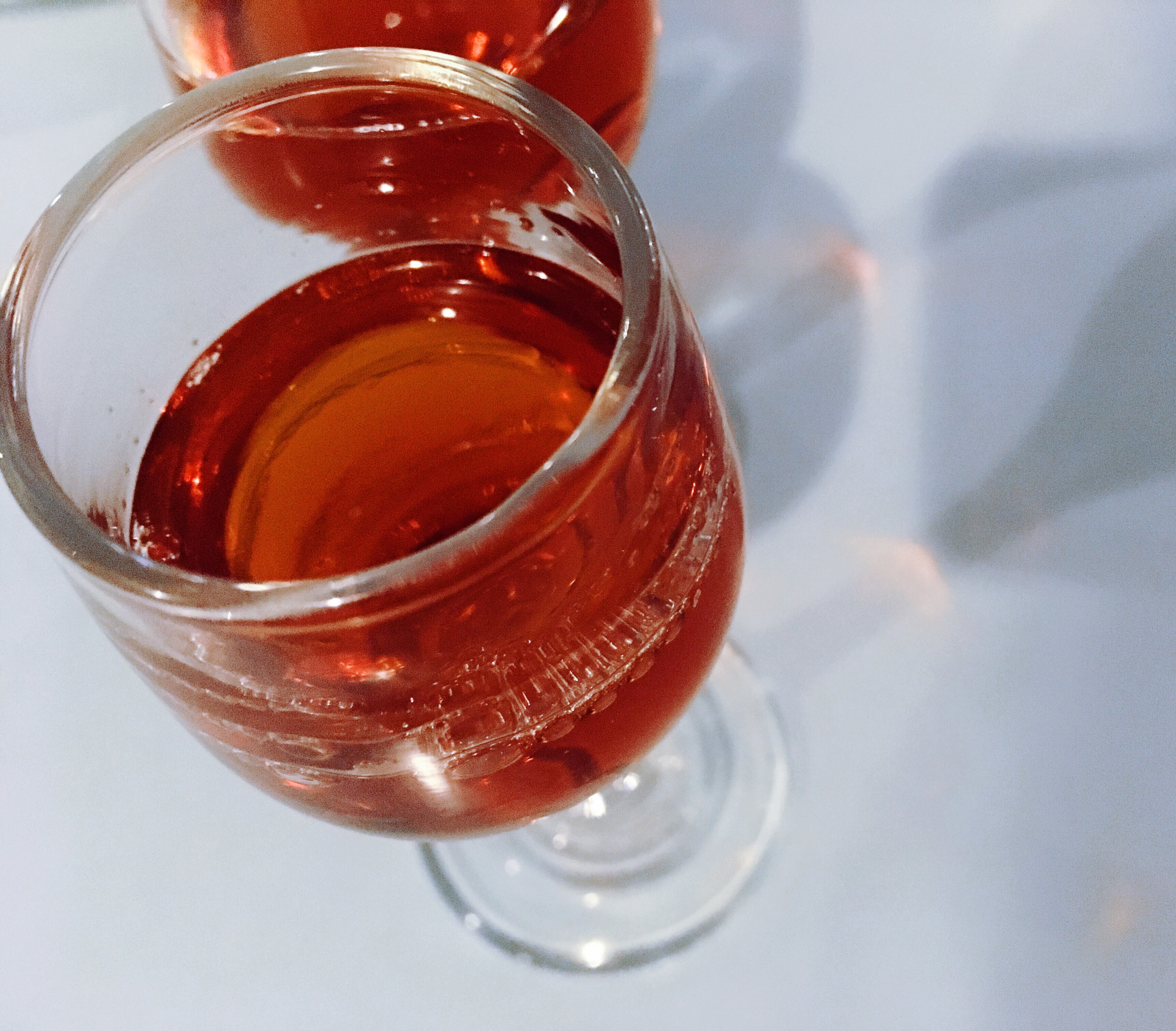 Wine Goes With Everything

Naxos is the mythical birthplace of Dionysus, the Greek god of wine and partying, and the people of Naxos still show their erstwhile patron deity due devotion. Greek wine isn’t currently what you’d call internationally famous, and Naxos wine doesn’t really even ever make it off the island. Naxos seems perfectly content to enjoy the good stuff themselves. It seemed to us like pretty much every Naxos native made their own wine. In stores, you’d find wine made by the shopkeeper or their neighbor in big jugs. In restaurants, they’ll sell you an off-island bottle if you want one, but for the most part they serve house wine straight out of the barrel in 500 ml (2/3 of a bottle) tin pitchers for around 5 Euro. The pace of the meals was leisurely enough to enjoy every sip of house made rose. 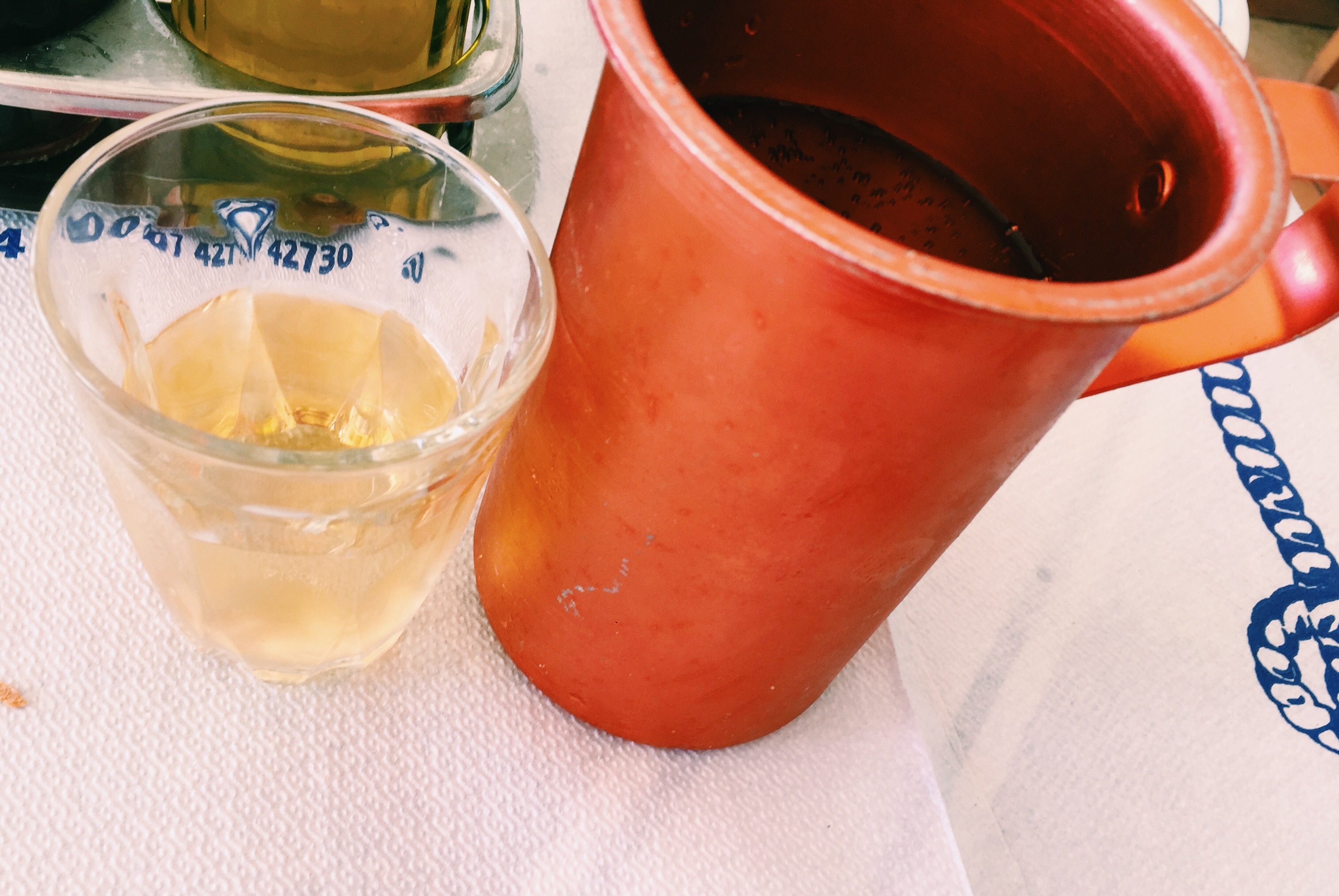 When we tasted our first little pitcher, we were surprised to find that it tasted a lot like an unfortified vermouth. Way back in the early days of winemaking, as far back as when Dionysus himself was serving the stuff, it was common to enhance wine with herbs and other flavors. Apparently, in Greece, they’ve kept up that ancient tradition. A particularly common style of flavored wine is retsina, wine with pine resin added. We’ve heard retsina has a bad reputation, at least among people west of Greece. We tried some, and we don’t see why. It was still relatively dry, as compared to a moscato or a riesling for instance, but the resin added a soft sweetness and just a touch of evergreen flavor. It paired nicely with Mediterranean flavors.

Not your style? That’s okay, plenty of Naxos’ wine was made in the more modern, unadulterated style. For our part, we were happy to have both options available. Every meal was an opportunity to try one or the other. 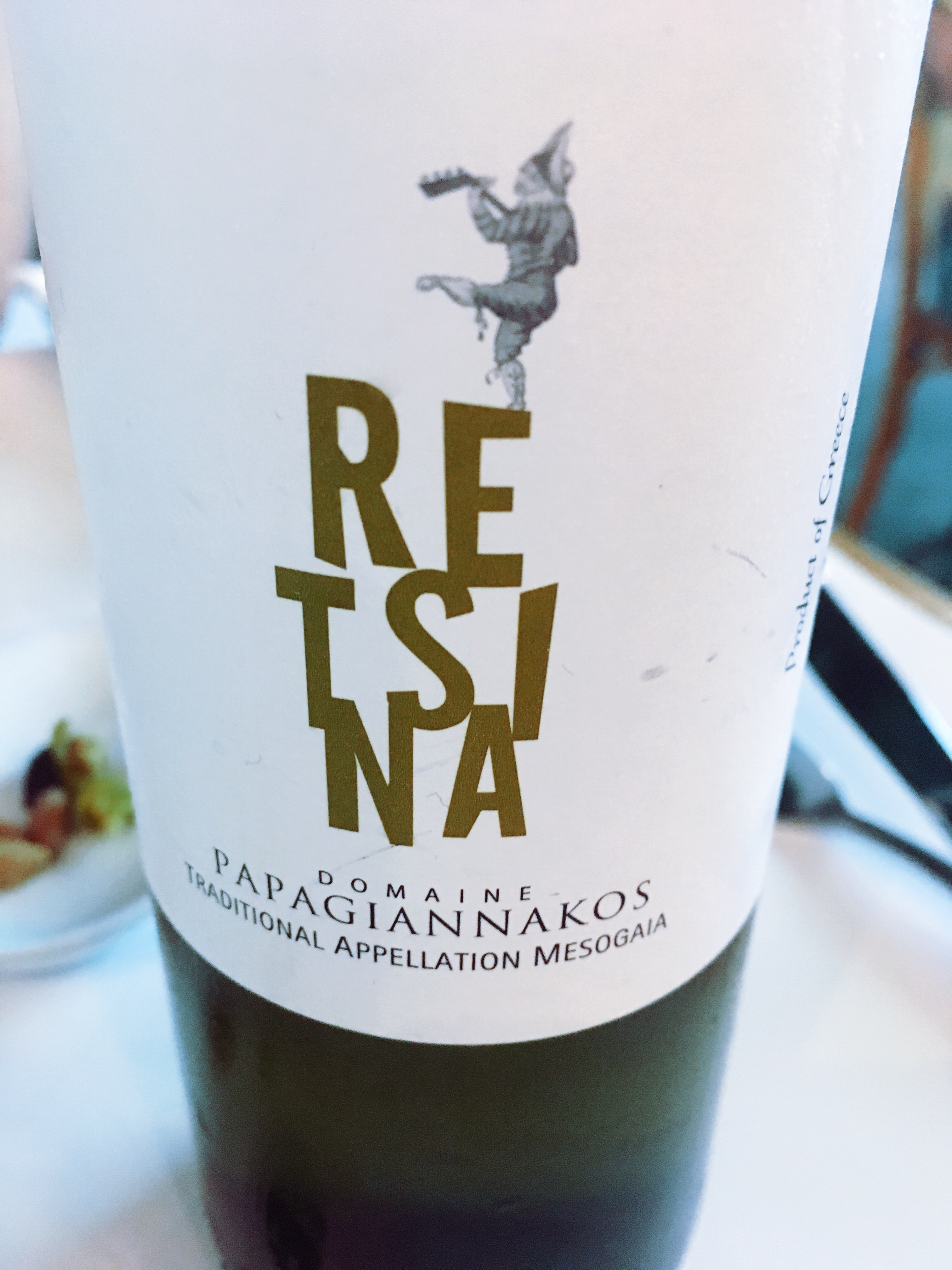 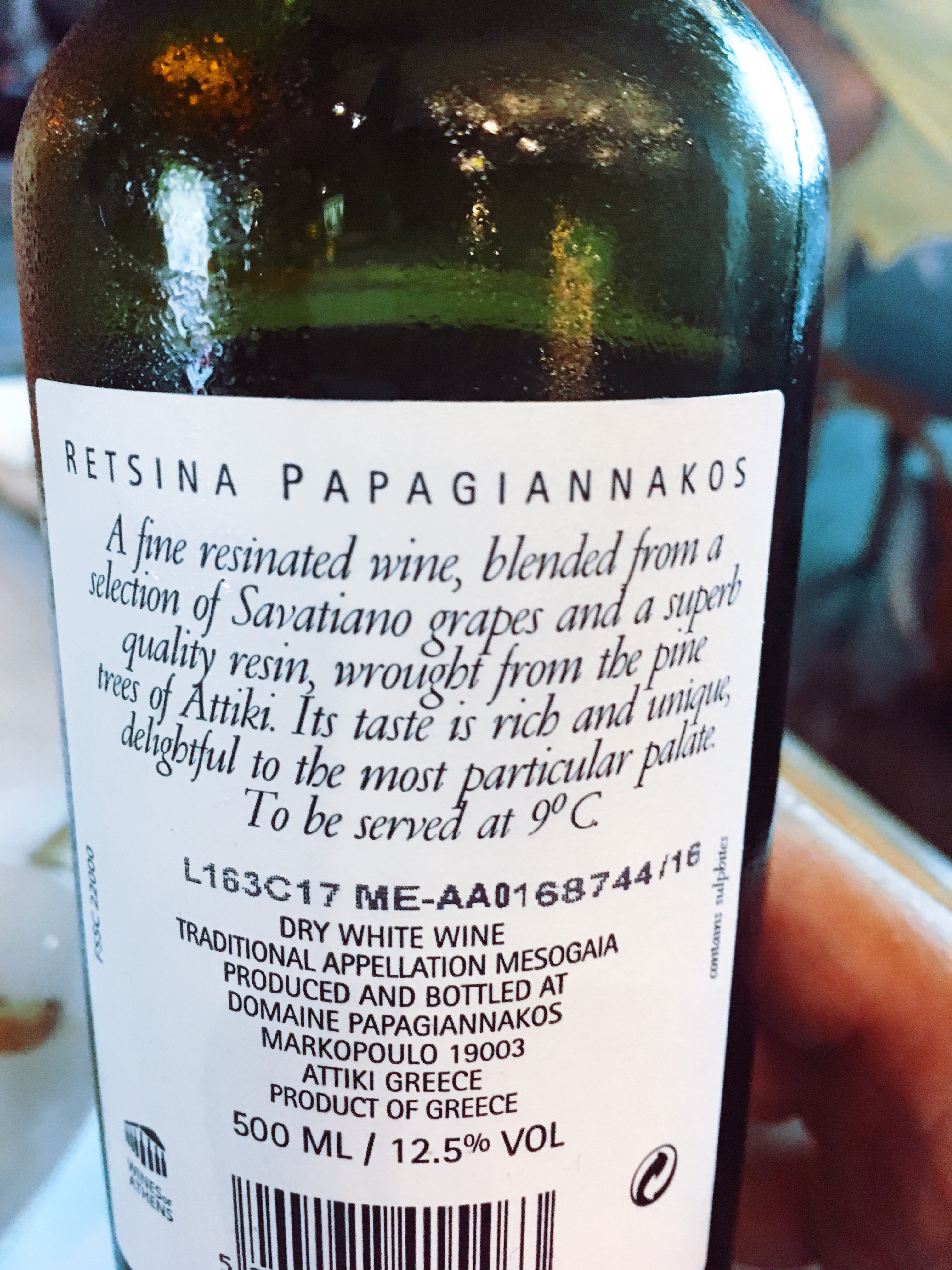 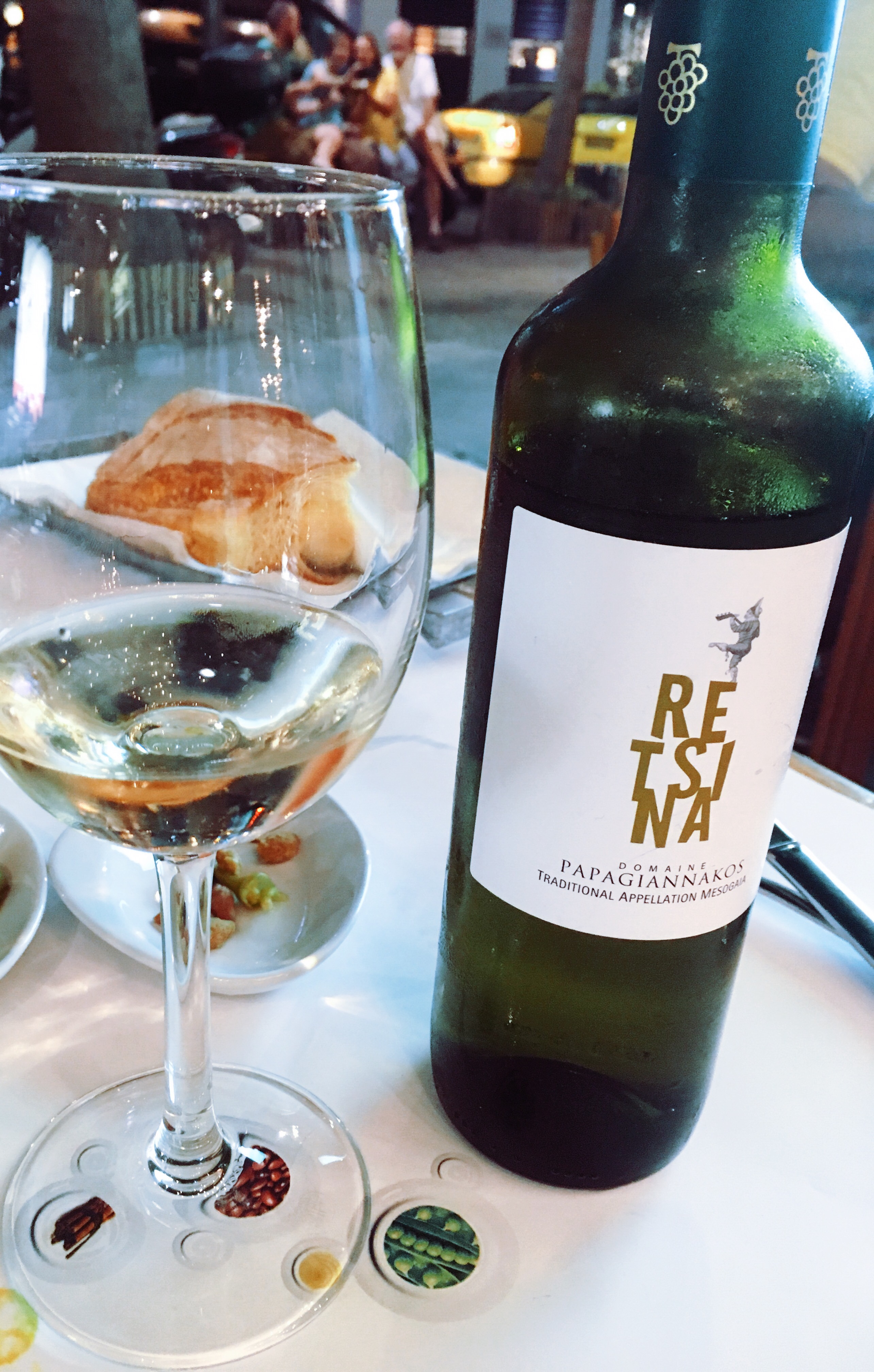 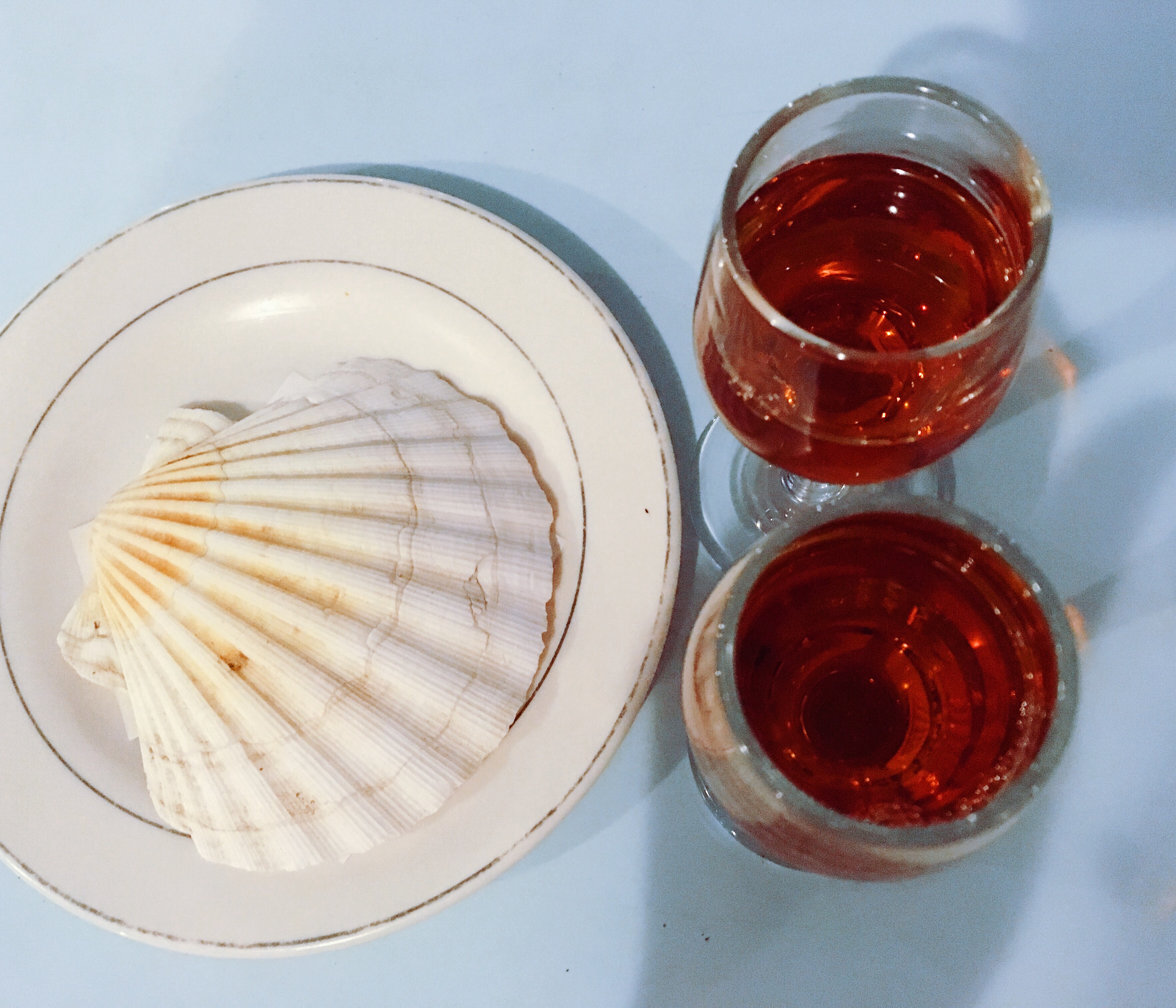 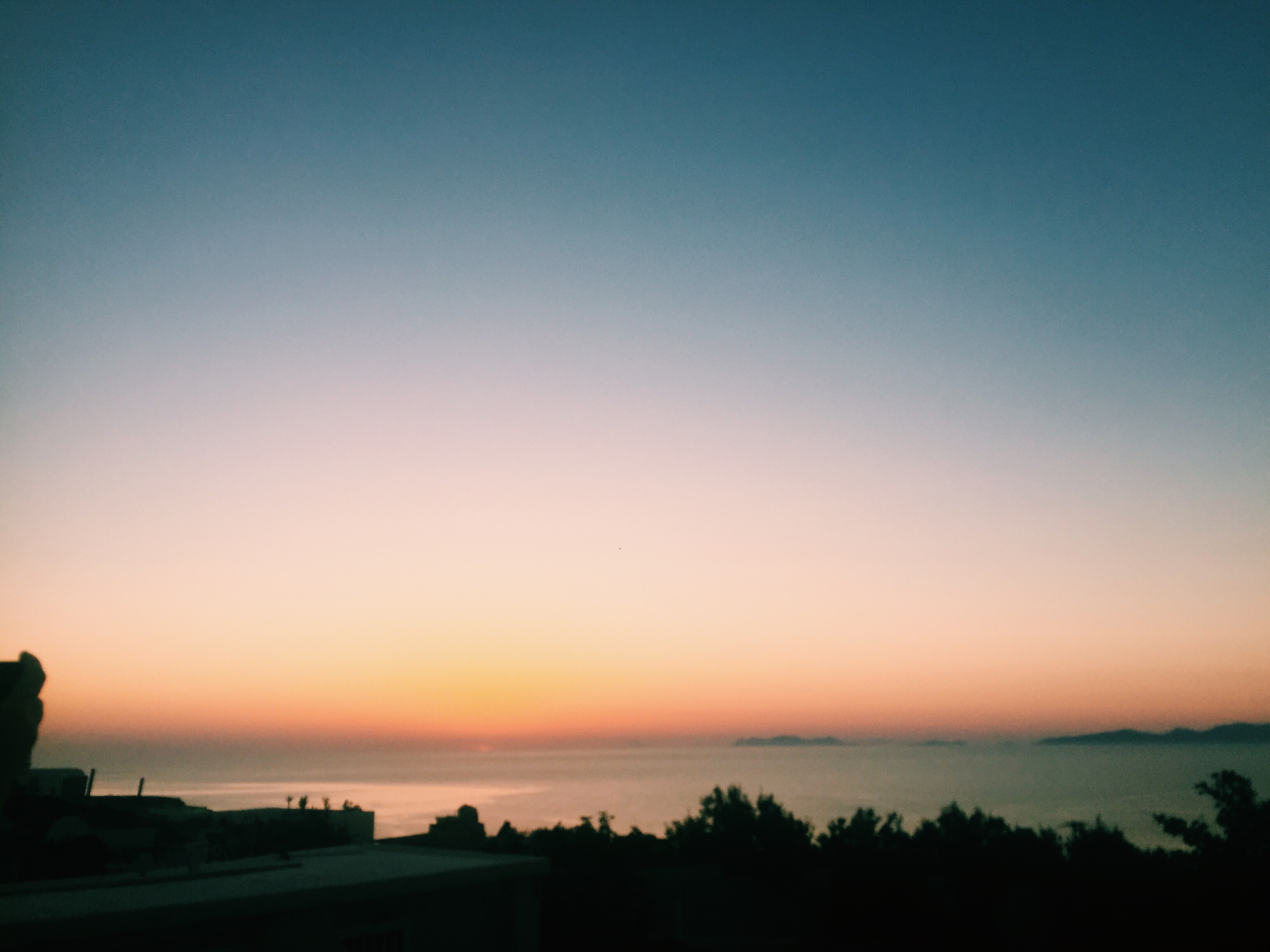 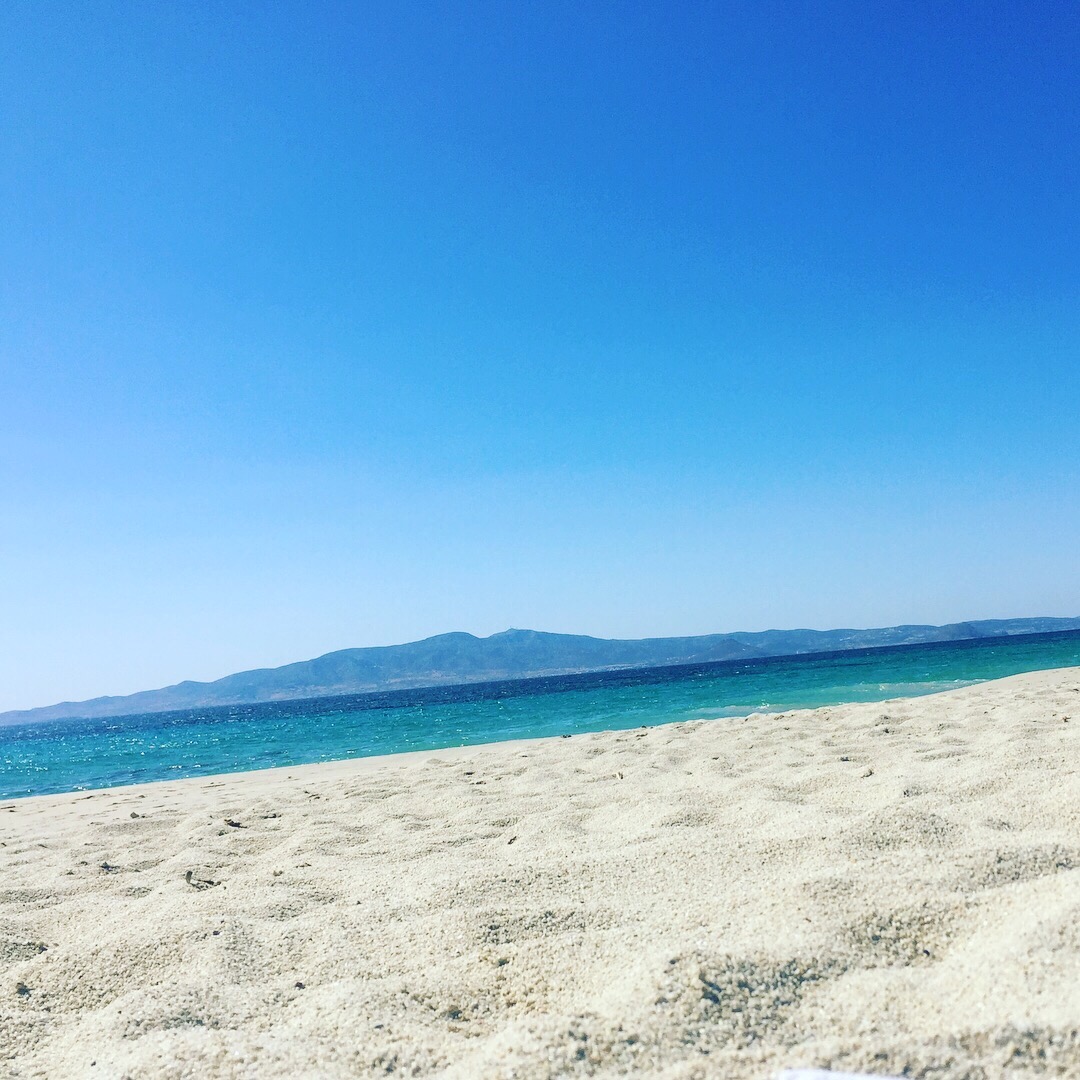