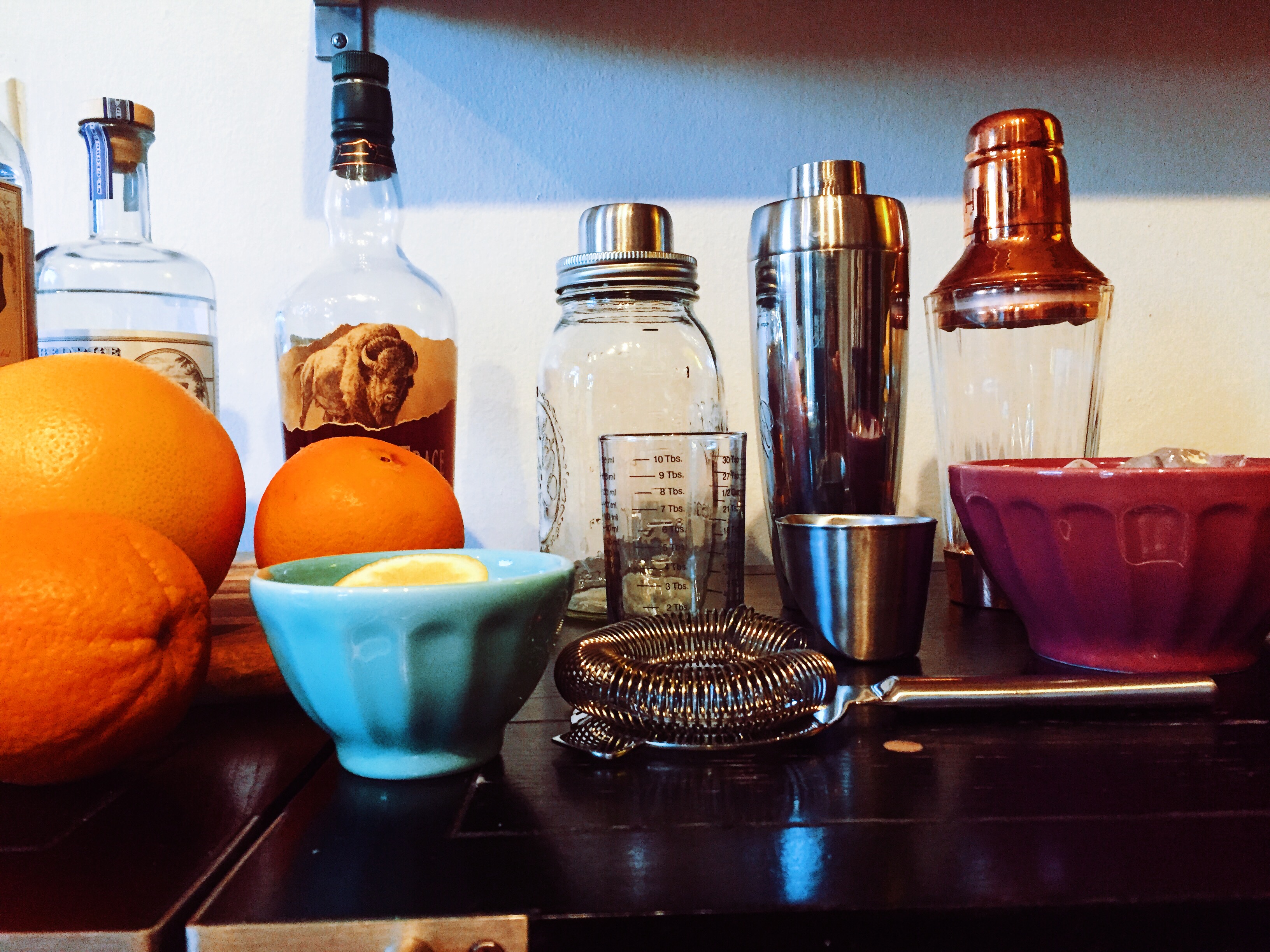 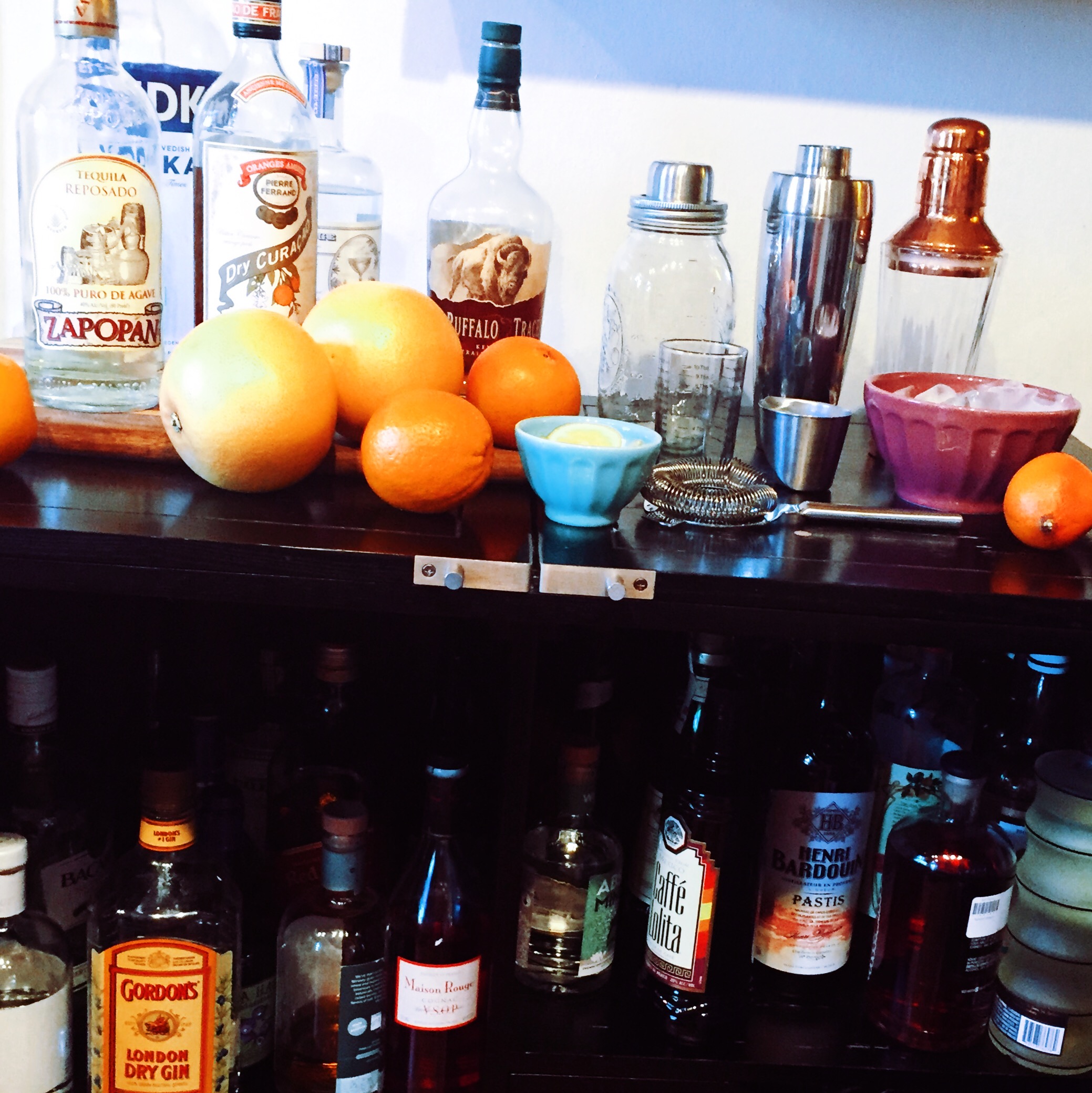 From the beginning, we have always had a bottle of crème de cacao in our bar. To be clear, it’s the very same bottle, and it’s almost full.

When we first started our bar, we had no idea what we needed; so I consulted an ‘Essentials of a Home Bar’ list. There were about twenty-five bottles on it. I dutifully purchased them all, only to discover to that I didn’t know what to make with them. Many of those first bottles languished on our shelves for quite some time. Eventually we were able to use most of them, but we didn’t feel the need to replace them when they were gone. And we’ve never found a use for that poor, old bottle of creme de cacao.

There’s another set of bottles that are always on our shelves, the ones we can’t do without. If we were to go back in time, we’d tell our younger mixologist selves to start with them.

All told, it’s nine bottles (not 25!). With them, a little bit of equipment, and a few garnishes and mixers, you can make the most standard of standard cocktails and numerous others, satisfying a broad spectrum of cocktail tastes. All told, they cost about $200, which isn’t a small investment but also isn’t an exorbitant price to pay to make yourself a decent nightcap or to offer your guests an expert pre-dinner drink. And it’s about 100 cocktails for the price of 12 out at a bar. So, not bad.

Best of all, you don’t even have to shell out for all nine bottles at once. Just the first four will get you off to a solid start. 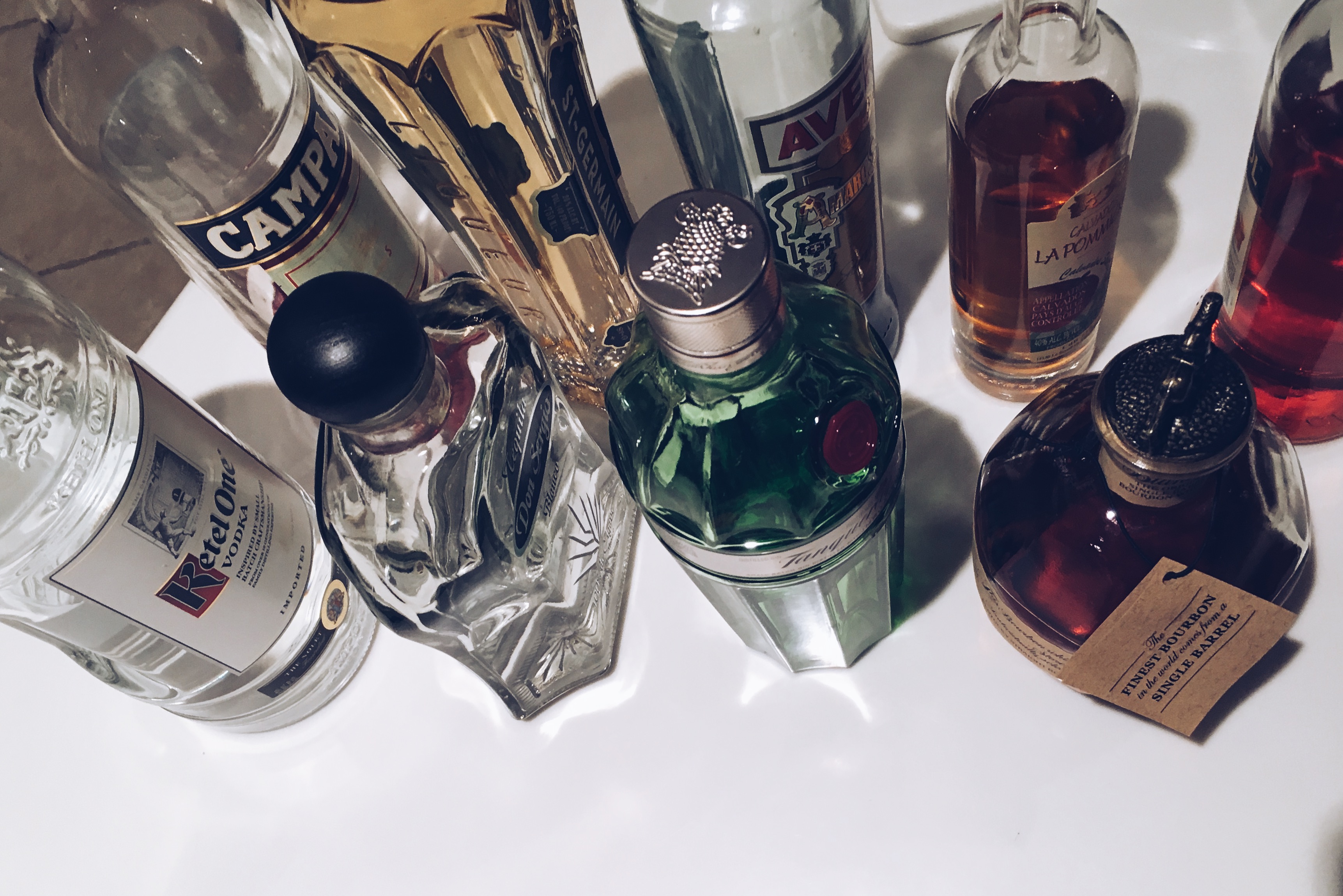 Step 1: the Martini and the Manhattan

These four bottles give your bar just enough to be able to offer something quite respectable, and to hit the spot for a range of cocktail tastes.

We’re gin people; so we almost always have three bottles of gin for different purposes in our cabinet; if you’re interested, you can read more in our recent post on the ins and outs of gin. For now, though, it’s enough to know that even being the gin lovers we are, a bottle of mass-produced premium gin like Tanqueray or Bombay Sapphire is the only one that we always make sure we have. If we have that, we can do anything that requires gin. It’s not so expensive that we feel bad mixing it in a Negroni, and it’s interesting and pleasant enough to use in a martini.

Scotches, ryes, and bourbons all have their advantages; and even different brands, blends, and ages have quite different things to offer. We have more to say about that here. That being said, we find that for mixing purposes it’s enough to have one bottle of straight Bourbon. It does a good job with most anything you’d want from a cocktail whiskey. We like Eagle Rare, but you’ll probably have your own favorite.

More than anything else, a lack of vermouth cripples a bar. It’s a crucial ingredient in most of the classics, and beyond. For the dry, or white, vermouths, be careful of the low end; they can taste like a pinot grigio gone bad. Pick up a bottle of Boissiere or Noilly-Prat, and if you want to know more, check out our Battle of the Vermouths tournament.

Red, or sweet, vermouths are more consistent in quality, though quite variable in flavor, from the vanilla Cinzano to the bitter Punt e Mes. So, you may want to try different ones to find what you like. We favor Dolin and Boissiere, finding that they do everything we want of a vermouth, all for $10 or $15. Once again, we have plenty more to say at the Battle of the Vermouths.

Add a lime, some seltzer, some tonic, maybe olives, and maybe some aromatic bitters and you have what you need for Martinis, Manhattans, old-fashioneds, whiskeys and soda, and gins and tonic. Pro trick: for your friends who say that cocktails are ‘too strong,’ just reverse your Manhattans or Martinis (swap the usual proportion of spirit to vermouth). 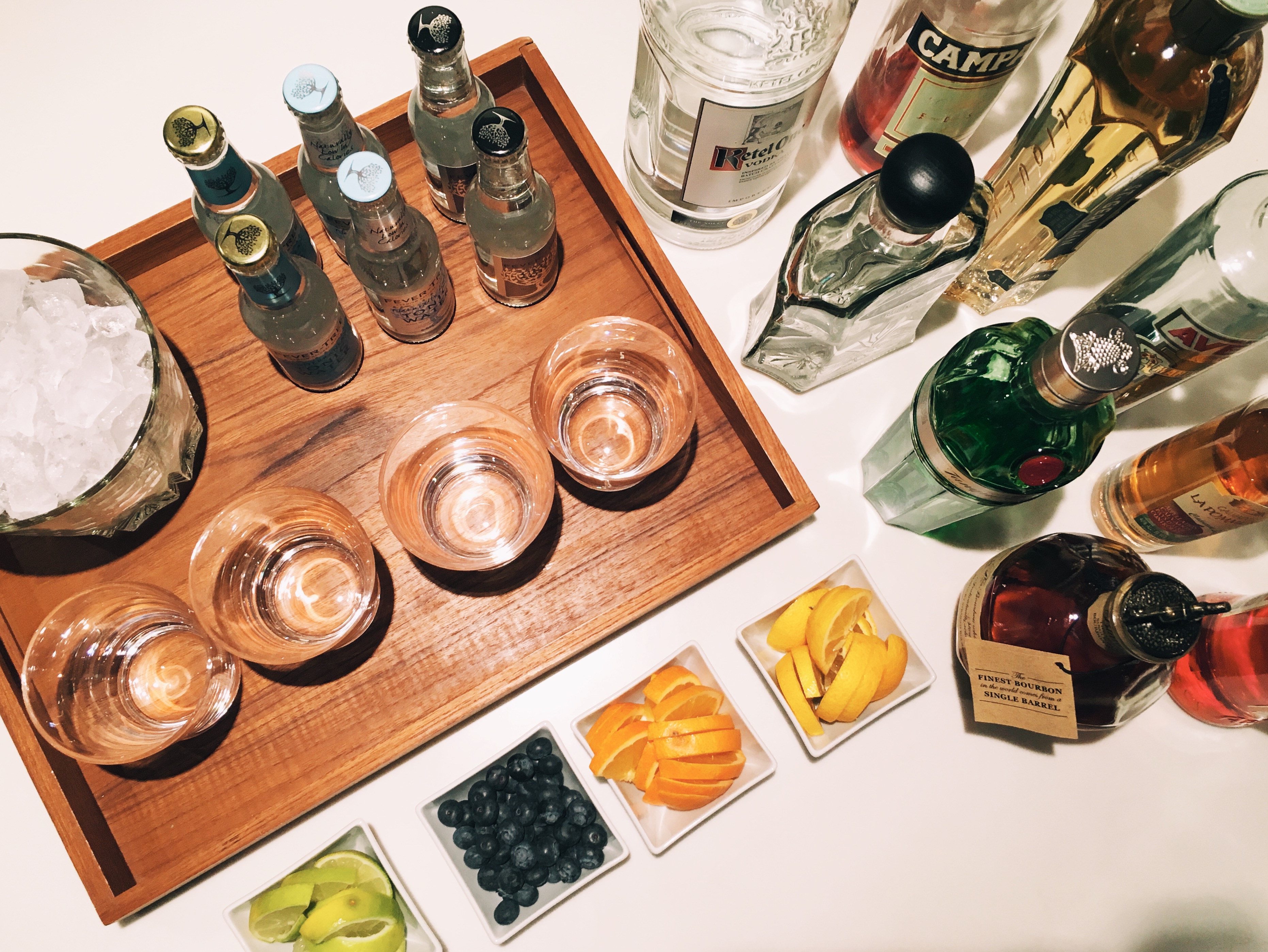 Vodka and tequila bring up bad memories. Remarkably frequently, I hear, ‘I haven’t had tequila since college,’ or I watch a face go a little pale when I suggest a vodka drink.

Tequila is for more than cheap shots, and vodka comes in other forms than jello. Some people are too scarred by their early, less discerning experiences; it’s best just to offer them a gin drink. For others, tequila or vodka in the right hands make for some great cocktails that will help them move on from those dark memories.

Vodka and tequila in your bar, along with an orange liqueur, add margaritas, Negronis, martini variants, and more to your repertoire.

You’ve certainly noticed the many shelves of different flavored vodkas at your liquor store. Pass them all, and get yourself a bottle of straight vodka. You can easily add whatever flavor you want for a specific drink; so why tie yourself down to an entire bottle devoted to raspberry or coconut or whatever?  We’ve found that the cheapest vodkas have a strange flavor and too thick a texture. But as long as it has a crisp, clean taste, it serves our needs nicely. Smirnoff and Svedka fit the bill. In our bar, vodka, with its more neutral flavor, substitutes for gin when we want the flavor of secondary ingredients to come out more strongly.

In general, you get what you pay for with tequila. That being said, we still gravitate toward the mid-range, like 1800 or El Jimador. Recently, reposado (slightly aged) and anejo (more aged) tequilas have become very popular, their mellower flavor particularly suiting sipping. Since we mostly mix our tequila, we buy silver (aka blanco), the most adaptable to the most cocktails.

Orange peels turn out to be shockingly crucial to cocktails. They’re the key ingredient in many popular liqueurs, all of which have their advantages: triple sec is cheap and sweet, perfect for making pitchers of margaritas; curacao is bitterer; Grand Marnier and Cointreau bring in the mellower notes of brandy; Campari is a bracing combination of refreshing and bitter. If we were to choose just one, it would be Campari’s sweeter, more restrained sister Aperol, once again because it’s the most flexible option. It’s less expensive than most, sweet enough to substitute for Grand Marnier, and bitter enough to do Campari’s job. 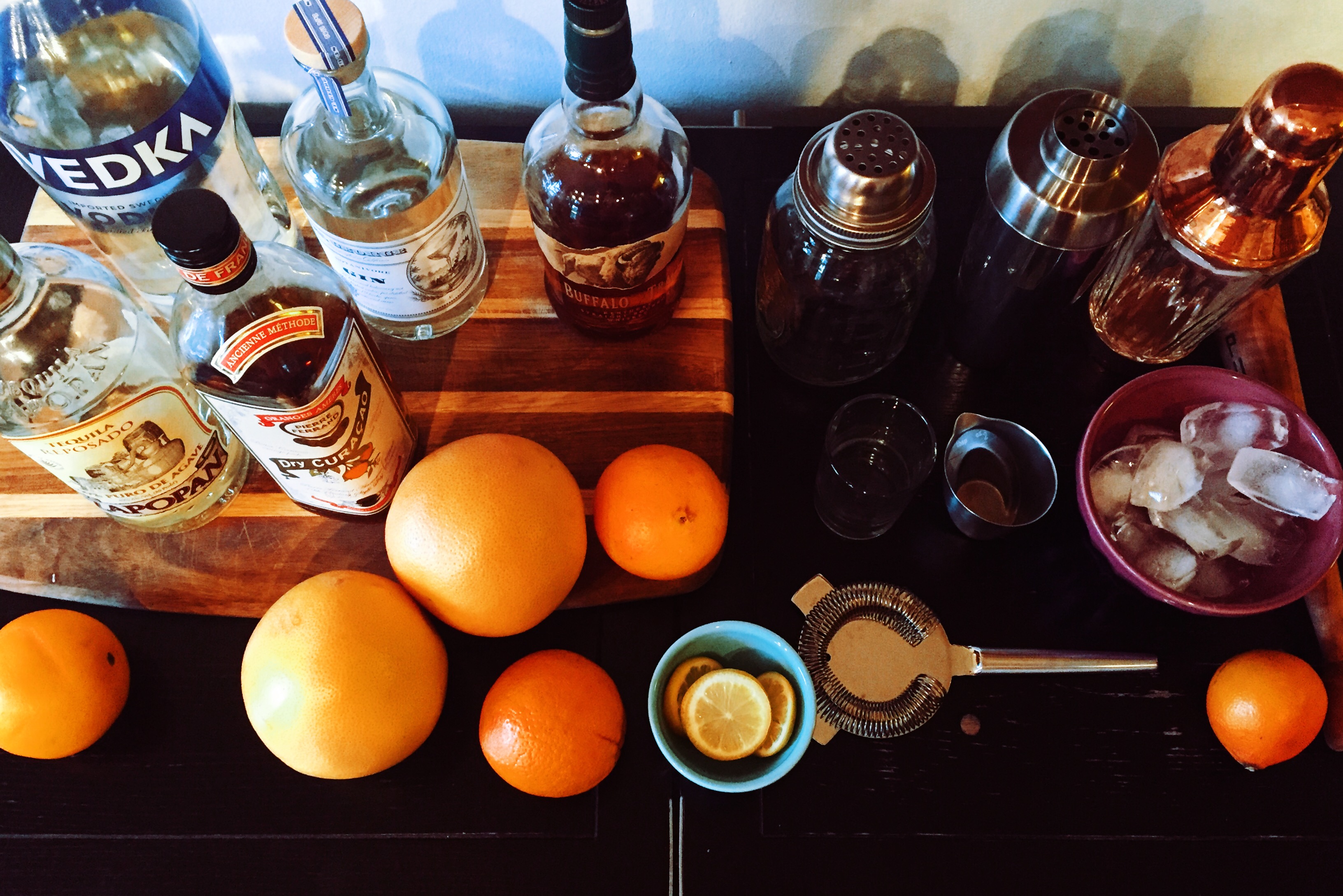 In the first two steps, we’re gathering the essentials. In step three, we start to give our bar some character. Neither of the bottles we feature here is ever entirely crucial, but their presence goes a long way toward bringing some breadth and depth to what we can offer. If you don’t go with our recommendations, choose two of your own favorites with flavors you really like that can be added to a number of recipes. Avoid those endless series of cheap schnapps and liqueurs (unless you’re making a pitcher of margaritas or sangria for a party); instead choose quality brands that specialize in the flavors you enjoy.

Anise is the orange peel’s rival in the contest for most inexplicably popular liqueur ingredient. From all across the Mediterranean come a wide array of anise-flavored liqueurs: absinthe, anisette, arak, ouzo, pastis, sambucca, and more. Between the two of them, anise and orange peels dominate the liqueur aisle at my favorite liquor store. Who would have guessed?

Based on its popularity, anise liqueur bears consideration for the 9-bottle list. That being said, anise flavor provokes strong reactions. If your reaction is one of distaste, you can skip it without irreparably weakening your bar. I will say, though, that even if you dislike the similarly-flavored black licorice, you may want to give anise liqueur a chance; it seems to go down better in alcohol form. Anise liqueur is most typically taken with ice and water, but it’s also a key ingredient in the Sazerac; or you can swish it around in an empty glass before pouring in the rest of a cocktail, to add just a hint of flavor. My favorite use of all is to float it on top of a cocktail; if you pour it carefully enough it forms a milky white layer, to dramatic effect.

It’s time to add a bottle that brings your personal touch, or one that reflects your current mood:  the sweet, floral St. Germain; or the complex, herbal (and pricey) Chartreuse; or the softer, bitter herbal mix of an Amaro; or coffee, pear, or ginger liqueur. It’s your chance to give your bar a signature style.

Don’t panic. You don’t need to rush into a permanent #9 decision. If you don’t know where to start, trying some out for size can be fun.

For us, #9 is Cocchi Americano, a delicately floral vermouth cousin. At any time, we might be experimenting with something new, indulging a current favorite, or returning to an old flame. But through it all we always have a bottle of Cocchi on the shelf. We’ll drink it on the rocks with some bitters, use it as a base for brunch cocktails, or substitute it for vermouth. If you’re in the market for your #9, you might want to give it a try. 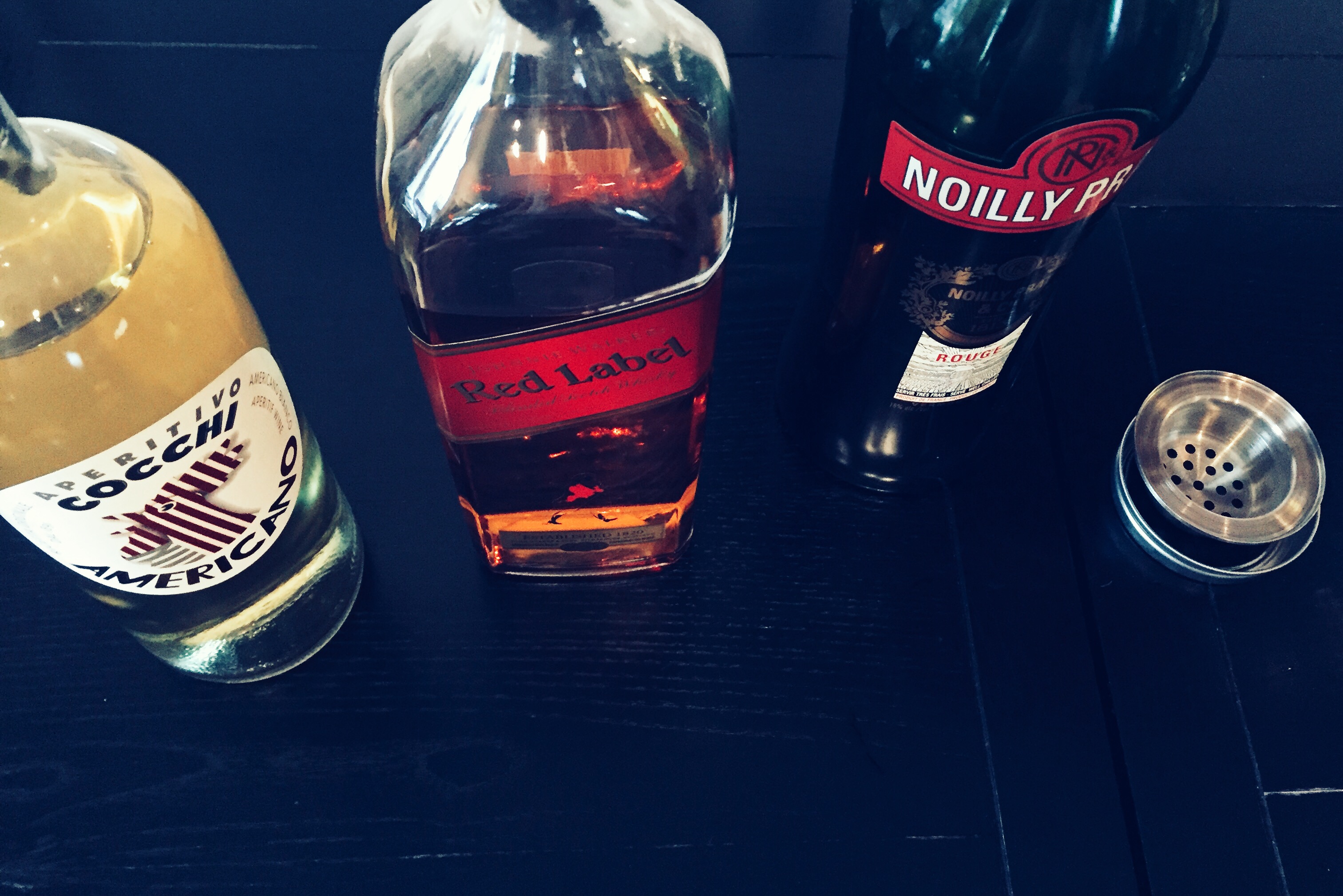 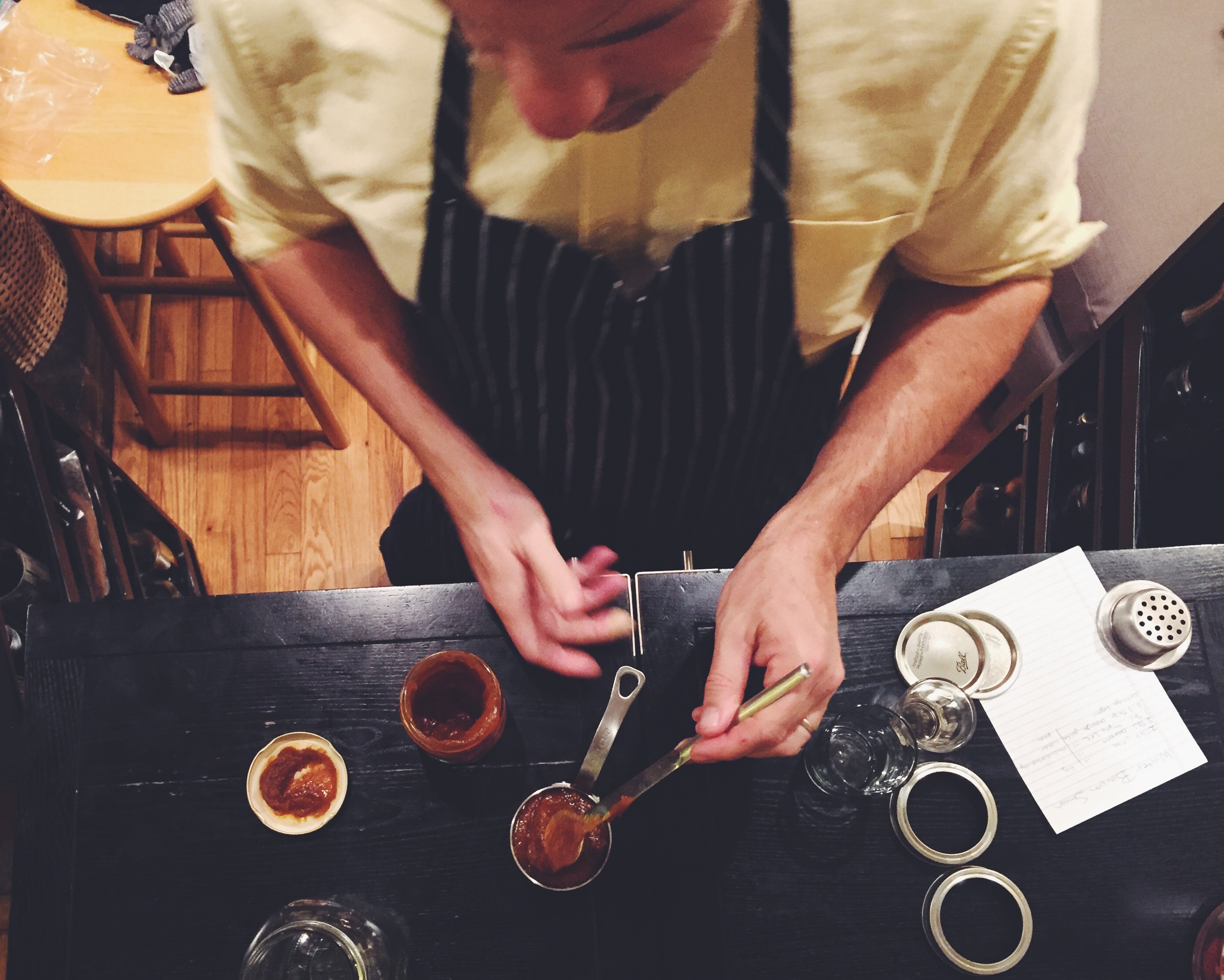 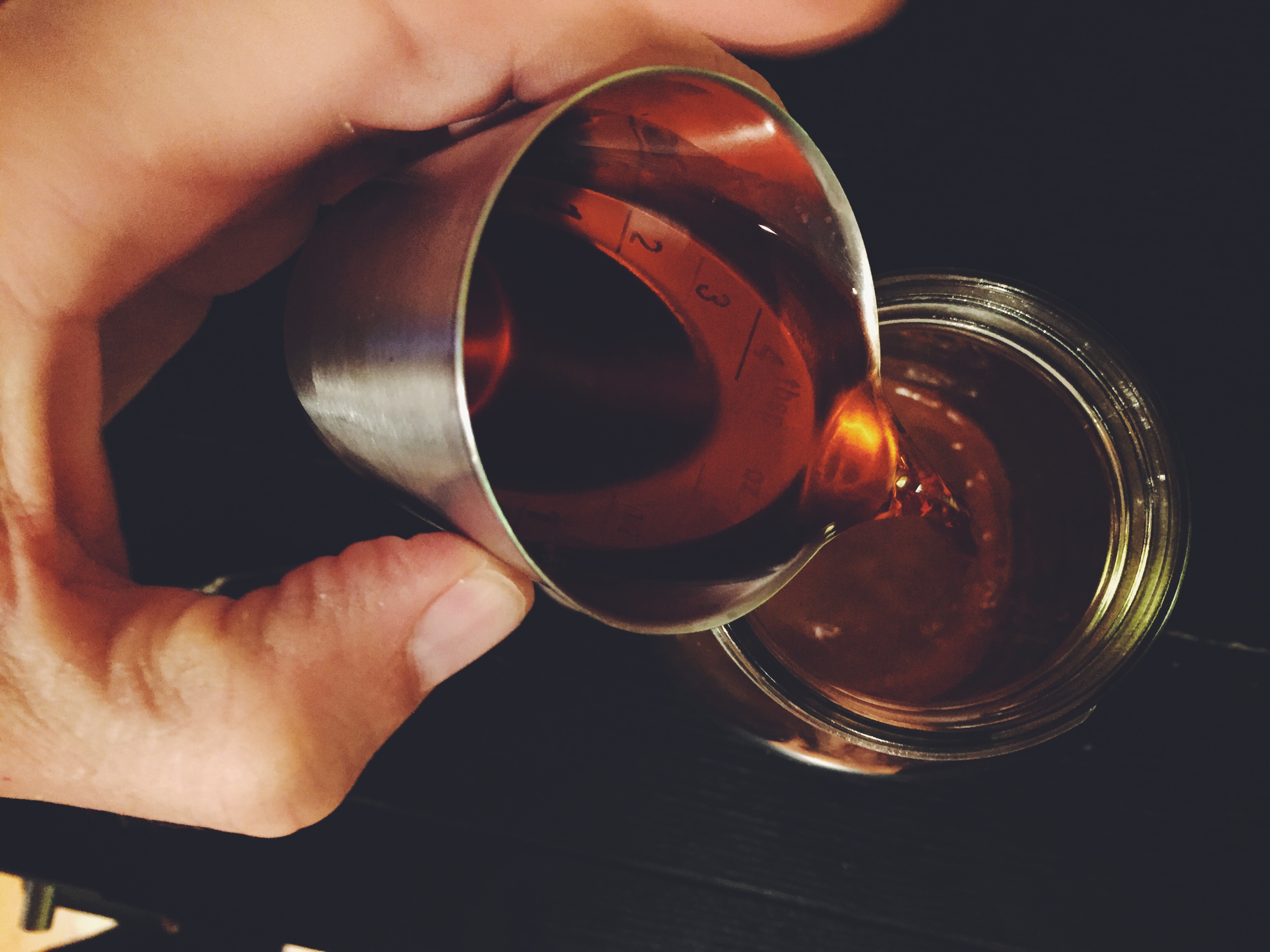 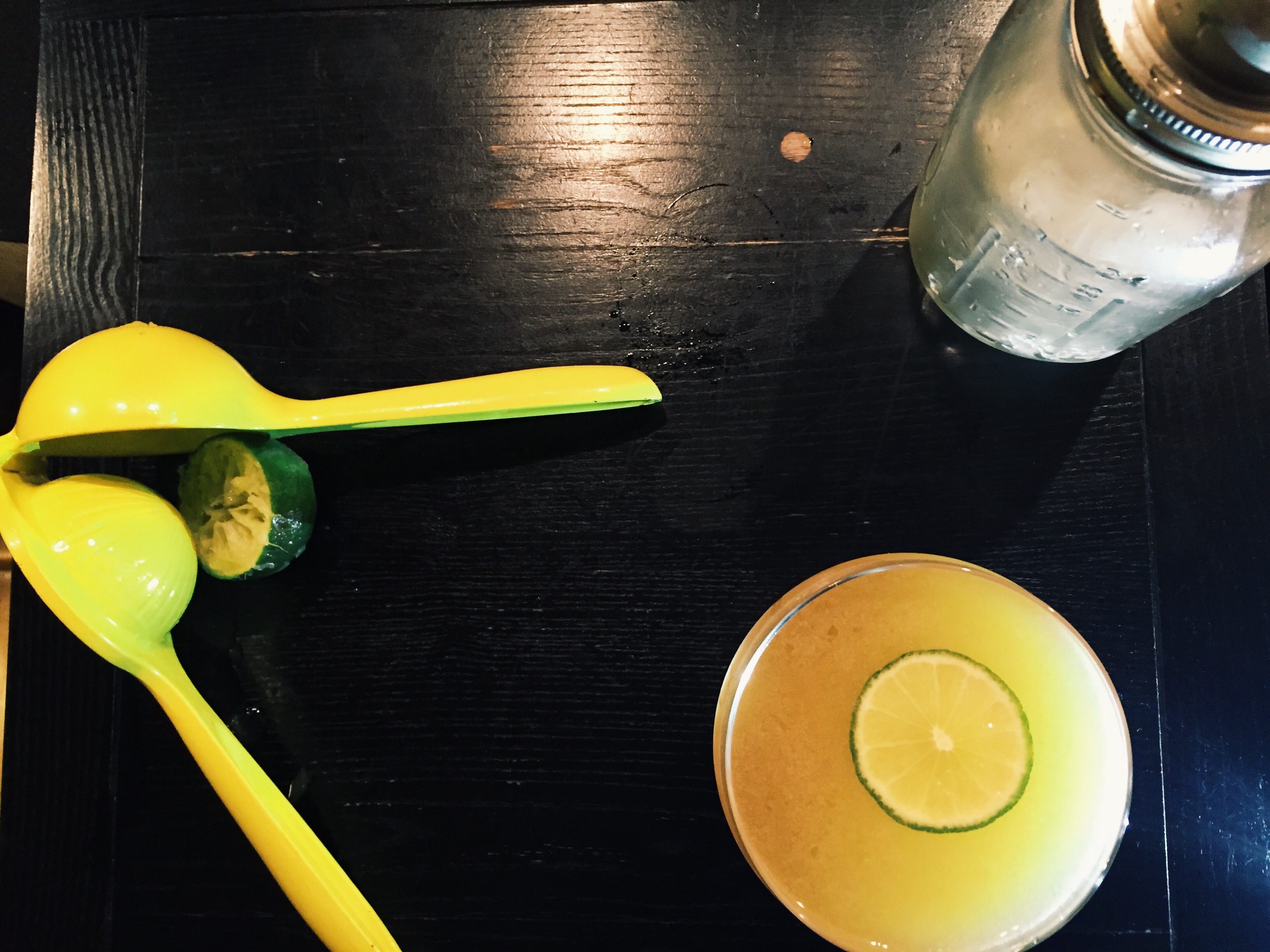 Read more on how to build a bar here.

Those few of you who’ve been with us from the very beginning might remember that we began this blog with a four-part series on how to get your bar started. We developed an updated and condensed version of that series for Culturescene Magazine, and thought that we’ve had enough questions about getting started that it might be worth re-posting here, as a refresher course for some and a starting point for others.